We’re guessing that you’re familiar with the face, but you just can’t place it in a movie or TV show. You think Antonia Campbell-Hughes might have played an elf in one or all of the Lord Of The Rings movies, but instinctively decide against it. No, you feel, she looks as if she’d be into something a bit less commercial or commodified. Something against the grain. Something with teeth.

Not that you’d think it to look at her slight, slim frame and her potently attractive features, but 31-year-old Campbell-Hughes is quite the hard worker. She dispels the notion that small equals fragile, and if you glance over her nominal CV – especially from the mid-Noughties onwards – you’ll discover a lengthy list of roles across film and television that are indicative not only of her work rate but also her levels of quality control.

One also receives the distinct impression that Campbell-Hughes is fast approaching the end of her bit-part actor status. Yes, she implies, she will continue to do what she wants to do, but a stamped certificate that states she can play leading roles will most definitely replace the apprenticeship she went through in her 20s.

As is to emphasise this, she is in virtually every frame of her latest film, the award-winning Kelly + Victor. Set in contemporary Liverpool, the movie is a frank portrayal of a fractious love affair between the titular characters, each of whom struggle to live a life that is unmarked by dysfunction. It’s a strong film with often bracing adult themes, with Campbell-Hughes delivering an utterly committed performance of a woman psychically scared by tragedy yet optimistic enough to hope that love will heal all wounds.

“I remember exactly when I got the script,” she says. “It was at a time when I was being sent a lot of those gritty Northern English scripts, some of which are good, and some of which aren’t. But I thought the script had tones of something which showed we’d be making a film that wasn't grit for grit’s sake. I loved the book by Niall Griffiths, so I knew the movie was coming from a place of quality, and that sparked my immediate interest.”

The deal was sealed, so to speak, when she met the film’s director, Kieran Evans (who nabbed a BAFTA for Best Outstanding Debut). “I instantly knew he wasn't going to do the source material an injustice, that it wasn't going to be voyeuristic, and that he had real heart invested in it.”

Between her starring role in Kelly + Victor and her lead role in the yet-to-be-released film, 3096 (which, controversially, is about the abduction and slavery of Natascha Kampusch, for the portrayal of whom she underwent a medically supervised weight loss program), Campbell-Hughes seems to be on the cusp of something special. It certainly isn’t before time, as she has been on the so-called (and often overly hyped) ‘Rising Stars’ lists for some time.

Born in Derry, Northern Ireland, and raised between Switzerland, Germany and America, she has said that her life can be likened to a puzzle of recreating herself and trying her hardest to fit in the pieces. Campbell-Hughes’ mother is a native of County Donegal. Her Liverpool-born father worked for American chemical company Du Pont, which had plants worldwide. Moving house and relocating was part and parcel of growing up, she says.

“It was an interesting childhood where I learnt a lot. Something I really cherish now, and love, about Ireland is the somewhat tribal nation pride - a land connection. What is good about not having grown up with that, is that from day one I saw people as people, not where they came from. My first school – I was three - was an international one. Racially, the mix was as diverse as can be imagined across 23 children. So move and change was fairly normal for me. It’s quite hard to stop moving now.”

Being an only child, she recalls, the family unit was tight-knit. “Yes, we were a small family, and moving a lot makes that even smaller. Being foreigners in non-English speaking countries intensifies that, too. Family life back then was quite formal and disciplined, but with warmth and friendship.”

A precocious (if quite shy) teenager, she grew up loving arthouse cinema. Music and books, also, became crucial lifestyle and creative touchstones. “I was very much into music from the age of 11 - I was given a Cure album, and that set the tone forever!  When I was 13, in Frankfurt, I saw the punk band, Die TotenHosen, and then delved into a Euro-punk vortex for a long time. Aside from music, reading was all I did. Babysitting money was spent each week on a new book. I found a copy of JG Ballard’s Concrete Island when I was about 11, and that also set the tone.”

From being an art student, she initially made something of a one-to-watch name for herself by becoming a successful fashion designer (she once had her own clothing line at Top Shop). Music played a part in her development (and still does, culturally, at least) when she fronted a rock band that made the right noises but didn’t really go anywhere.

Her true calling, she admits, was not as a fashion designer or a model (she has been photographed by the likes of Rankin, Perry Odgen and David Bailey) but as an actor. With sharply defined facial features that, outside a film set or studio, rarely experience the soft swish of a brush or finger-tipped blusher, Campbell-Hughes slowly began to stake her claim. “I started in comedy,” she relates, referring to the successful BBC Four comedy series, Lead Balloon (co-written by comedian Jack Dee), “and that wasn't because I said to anyone that I’m a fan of British comedy – I just got a job. That got me more comedy roles, though, and so naturally enough I got offered more and more parts in that area.”

She could see, however, that comedy wasn’t the area where she wanted to stay in all of the time. Her love of independent cinema (and of “finding odd little Polish films made on a handicam in the 1960s”) effectively stalled her career as an actor working predominantly in comedic roles. “It came to a point where I knew I had to stop doing comedy, and face the potential of not working for a long time in order to try and pursue something that motivated me, moved me. My objective was to try and do things that were more compromising, challenging and moving. I’m motivated by a challenge in everything – if work becomes repetitive then why do it? I like to be frightened by things – face your fear, overcome it, and so on.”

Did moving around as a child assist her observational skills as an actor? “I guess having to redefine yourself and adapt – which was something I definitely did as I was growing up, going into a new school so regularly – meant that I could be a new person, in a way. That sounds like you’re faking it, doesn’t it, but it’s actually an opportunity for a person to rediscover themselves. It’s a wonderful thing to have people you grow up with alongside you to be a constant reminder of who you are, and to support you, but it can also be, perhaps, limiting.” 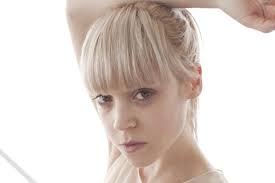 The way Campbell-Hughes tells it, there are two personality sets: introverts and extroverts. While a peripatetic childhood is good for, as she says, redefining and adapting, it can also lead to lack of true friendships and relationships. Which, in turn, can lead a person to become what can, perhaps incorrectly some of the time, be described as a ‘loner’. True?

She blinks. “You know…” A long pause. “Hhmmm…” And then another one. “I think as a society we champion and reward the extrovert – the extrovert is the success, is what we’re told time and time again. But I’m of the opinion that the introvert is the more successful and powerful. I would definitely say I’m an introvert – is that being a loner? I suppose I’m more at ease in smaller social environments. I recall that as a kid I was pretty creative with my personality until about the age of five. Then I learnt from school and moving to America that it’s easier to just ‘fit in’. My first acting job? Ha! Then I became just very reserved, enjoyed my own company. Watchful, perhaps.

“I’m a bit of a drifter, a bit of a nomad. There is, to a degree I think, a hint of empowerment in that. I’m very content with an audience of one. An audience of none? Not so good! That said, there have been times when I’ve chosen to keep things very isolated; I think that’s quite negative, but it’s an experiment that was good to toy with, and I learned from it.”

The learning of things is, of course, a continuous process, but the topics under scrutiny are becoming more defined. The array of potential career options previously pitched (and subsequently ditched) by Campbell-Hughes was once a talking point; why the flitting from one job to the next? Was she looking for something in one that she couldn’t find in the other? “Yes, I have been asked why did I go from fashion to modelling to acting, and so on, and it is, really, that growing up I didn’t understand everything had a job title.”

Fashion, she says, was viewed primarily by her as being about art and concept. She didn’t know it back in her Vogue-free days, but now she is fully aware of how real character can inform clothes. Perhaps more intriguing is Campbell-Hughes’ admission that fashion is a form of expression she now finds somewhat stressful. How so?

“At this point of my life, I know what makes me comfortable and what doesn’t, and I find it harder as an actor – as an actress, actually – that there’s such an expectation from people for actresses to wear designer clothes. Sometimes you’re just expected to be a hanger, but like I say, I know what suits me. I sometimes compromise what I feel happy and secure with; I’ve worn things on the red carpet, per se, that you’re meant to – long dresses at award shows, for example. That’s not correct for me, but you do it because you’re meant to – you’re an actor, you read the script and you play the part. When I have compromised what I know is right for me, however, it’s not worked out the way it should.”

Singular, divisive, audacious, skilful, committed to and immersive in her work to the point of eyebrow-raising scary. It’s like we said earlier: she goes against the grain, she’s got teeth. What exactly is the modus operandi of Antonia Campbell-Hughes?

“I was never motivated to be just the one thing, or to chase just the one job,” she replies. “I’m never lazy, and I’m always very curious. What I do is nothing more than an evolution of constantly moving and doing things.”

Kelly + Victor is now on DVD.