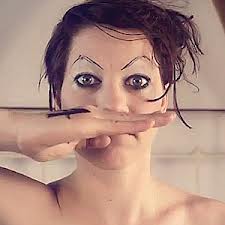 Contrary to some warped sense of popular opinion, you’re not some freaky avant-garde outsider, are you?

“My most recent record, Theatre is Evil [credited to Amanda Palmer & the Grand Theft Orchestra] is practically a pop album. I also feel like it’s one of my most liberated records so far because it’s exactly the kind of album I wanted to make. If, however, anyone had marched up to me years ago and said they really wanted me to make an 80s/90s derivative album I would have run screaming in the other direction. So it’s amazing what gets to happen when I work in a vacuum without anybody telling me what to do. No one likes to be put in a cage.”

For a rock star, you have a distinctive work ethic, don’t you?

“I think I have the kind of personality where, if there’s a space I immediately fill it. I think I have a weird New England Puritan work ethic. If something is going well, I feel really guilty by not pushing forward, or spending my time either creating or getting down to the business of my music. When I notice I’m slipping away from that I get very afraid. Of what? Oh, just that I’m losing the plot, which is that we’re really all supposed to be enjoying ourselves, and that if we start to take ourselves too seriously then you go into a dark place where things like concepts, ideas and principles can trump the fundamental point of living, which I really believe is to enjoy.”

You generally talk/write about everything – is that always a good thing?

“There are definitely things off–limits in terms of what I will talk about openly and directly with the public. I try very hard in general not to talk shit about other artists, other people, and not to dwell on the negative. I especially try not to abuse the megaphone that I have to make anybody else’s life more difficult. To me, that’s a real abuse of power. Neil (Gaiman, her partner) and I once grumbled at each other over Twitter. We were supposed to get together for lunch but he blew me off, and so I sat in the restaurant and - half-joking, half-mean - tweeted about him standing me up. Me doing that really upset him – and rightly so, with me abusing my sympathetic half a million Twitter ears. We had a good talk after that, and agreed that it was really dangerous territory. As for following people on Twitter, there are a lot of artists out there that I respect but I have no desire to follow – they’re just constantly complaining, and I have no interest in that. I want to be interested not irritated.”

You have learnt not to do this by recovering from previous mistakes, we presume?

“Yes, I have been in the position of having to step away from the cliff…”

I know we’re strangers, but can we talk about sex?

“Ah, the bisexuality thing! I talk about that if anyone asks… People are always confused by anything they can’t nail down, and bisexuality – especially for people with really conservative views on relationships and marriage – confuses the hell out of them. If you’re working in a system where you’re supposed to find one person, marry them and then stop feeling sexually about everyone else, then bisexuality doesn’t really fit into that equation. Being bisexual myself, of course – and knowing a lot of people that are, also - I find that really easy to understand. I feel it, and I love being attracted to both men and women. It makes perfect sense to me. People are always anxious around that which they can’t really grasp. If you’re absolutely gay then people can more easily define you by that – or at least you can firmly plant your flag in one camp with a community of people. If you’re bisexual, then you’re caught in a vague, cloudy purgatory!”

Does your bisexuality inform your music?

“It doesn’t inform the music directly, but if you pull back and you have a larger perspective, then part of being bisexual and of wanting to identify with it even as a teenager - around 15 or 16 – was that I just wanted to be able to do everything. Do everything and every one! I wanted a life with no rules or restrictions, and so I think that applies to my sexuality as much as my music, and what I say or what I write, and how I perform. It’s all under the same flag, really. Of course, saying that I want a life with no rules or restrictions can sound very exciting, but obviously there are always boundaries, rules and guidelines – as well as rules and restrictions that I have placed on myself. I think my main thing is that I’m always trying to create a world where I myself have devised the rules and restrictions, and they aren’t being imposed on me by some other system. If they are, then I try to tweak them to my liking. It’s the same in relationships, with lovers and monogamy and fidelity. I believe it’s a case of the more freedom you give your loved ones the more likely they are to stick around and be devoted to you."

You seem very much self-aware – what do you think are your main flaws?

“My biggest one is selfishness. I can travel down a narcissistic hole faster than you can say the word go. Especially when work gets overwhelming and the schedule is full. At those times, I can lose the larger perspectives, especially in my relationships. Neil and I were literally having a talk about how it’s often the timing of things like work that can be the undoing of the peace of the relationship – because the two of us will get busy and selfish at the same time, and each of us expect the other to be the understanding one! That’s been my life-long struggle, trying to undo what feels like extreme ego. Actually, that can be my undoing! But it has served the world and myself often very well, particularly when I’m focused and my ego is in check.”

(A small selection of quotes here first appeared in The Irish Times, October 2012.)