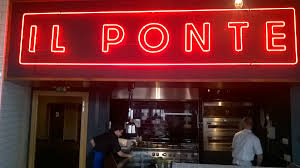 The D Hotel has been part and parcel of Drogheda’s resurgence as a destination town (although many natives now regard it as the next Irish city) for quite a few years. The hotel is positioned by the River Boyne, adjoining the Scotch Hall Shopping Mall and adjacent to the fancy bridge that connects to the North Quay. The restaurant facilities at the hotel have changed over the years, and its latest rebranding shoves out what was previously a smart ‘silver service’ delivery in favour of a more down to earth Italian eatery. We all know that anyone with a name that sounds like a member of Tony Soprano’s gang can open up an Italian restaurant, spin out the usual pasta and pizza favourites and – much like Soprano’s crew – get away with murder. We also know that just because a restaurant opens with an Italian name doesn’t mean that it remotely delivers a promise you can’t refuse, so we approached Il Ponte with metaphorical reservations (and literal, because, frankly we needed a table for three).

Accessed from the riverside walkway outside the hotel as well as through the lobby, Il Ponte immediately impresses with a smart design aesthetic that doesn't hammer you over the head with ‘Italian restaurant’ tropes – thankfully, there are no framed portraits of Marlon Brando, Robert De Niro, Al Pacino or Joe Pesci here; there are no hanging vino bottles, and no Dean Martin singing That’s Amore on the soundtrack (more about which anon). Instead, it has clever wall art that point to fresh produce, organic sourcing, natural ingredients. Much like its mission statement of wanting to “redefine Italian cuisine in the locality”, it takes what I think is the far better approach: it concentrates on getting the food right.

Because there were three of us here, we decided to order this, that, the other and ah-sure-why-not from the menu. Over the course of two hours we made our through a sizeable amount of really terrific food. Starters included Gamberi Piccanti (pan-friend tiger prawns doused in garlic, chilli, white wine) and a humungous plate – the Gran Tagliere di Antipasto al Italiana, which was so bountiful with meats and cheeses that by the time we finished we reckoned we’d have no room for the mains. Along with the starters came a round of crisp, perfectly made, hot-to-the-touch focaccia, which was dripping with olive oil, and which sealed the deal very early on. Mains included Spinaci Pizza, Stufato di Frutti di Mare, and Linguine all Carbonara. Portions were so enormous that we toyed, more or less, with the food on the plates. We were beaten into submission by the portions, but every cloud has a silver lining - we asked for takeaway boxes. Desserts? You have to be joking. All of the aforementioned was complemented by a just-right chilled bottle of Pinot Grigo.

So far, so good? Absolutely. The food was perfect, ably delivered, efficiently and attentively served in surroundings that were designed with contemporary ambience rather than established tradition in mind (take a well deserved bow, Dermot McNamara). The D Hotel’s 4-star status effortlessly produced a restaurant equal to the task, no doubt. There is, however, a problem, and the problem is this…

When it comes to the overall ‘atmosphere’ of a really good restaurant, music plays a crucial part, and while I know some people don’t care about what kind of music is played in the background to eating, drinking and chatting, the fact remains (and it is a proven fact, by the way) that if the music doesn't match the food offering, if it doesn’t match the tone of the restaurant, if it doesn’t match the overall vibe of the surroundings, then by subliminal reasoning, people will be reluctant to pay a return visit. Simply put, with my experience of hotel restaurants (and, folks, I’ve been to hundreds) the music just didn't fit the surroundings and what I think Il Ponte is trying to achieve. The restaurant is a really smart-casual proposition, but the music belongs in a diner serving burgers and hot dogs. I love a burger and a hot dog as much as the next person (unless that next person is vegetarian or vegan, of course), and if I’m visiting one of those types of places, then I have no difficulty listening to loud ‘80s rock music that seemed as if it was beamed in from reruns of MTUSA.

When I’m in a smart-casual Italian place – where the food and ambience are so stylish it makes you never want to set foot in the Italian joint on the opposite side of the river – I actually do have a problem. Classical music? No, that wouldn’t work – it’s too clichéd, too obvious. Ditto with a ‘typical’ Italian restaurant soundtrack (Dean Martin, Frank Sinatra, Ella Fitzgerald, Tony Bennett, lounge jazz, and so on). I’m suggesting the music should be as contemporary, as well-dressed and as subtle as the overall design – class cuts from Beyoncé, Drake, James Vincent McMorrow, Frank Ocean, Richard Hawley, Solange and John Legend, interpersed with classic soul songs and occasional hints of really good modern pop music.

Seriously, the music at Il Ponte was the only thing that made me think: do I really want to come back here and experience genuinely fab food (at reasonable prices) and good catch-up conversation with the likes of Bon Jovi, Billy Idol, Bryan Adams and Simple Minds hurling their hit songs at me? You know what the answer is, and while I’m completely aware that the answer is based partly on subjectivity and instinct (as to what works and what doesn’t), it nonetheless seems a valid one. If Il Ponte can improve on this area, it will become one of the best 4-star hotel restaurants in Ireland I’ve had the pleasure of eating in.