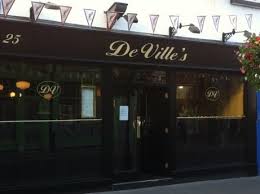 When chef Keith McNally opened his restaurant, Pastis, in New York’s rundown Meatpacking area in 1999, it blew the competition away to such a degree that one of the restaurant’s most noted celeb visitors, Martha Stewart, gushed that having an eatery of such distinction was like Paris coming to town.

Pastis is now closed for lengthy renovations but we appreciate Martha’s enthusiasm. Walking into DeVille’s (established, it says rather pointlessly, in 2012; the year of opening will mean something in 2032, but not in 2014, surely?), we are immediately struck by the gentle homage it pays to a 1930’s Parisian brasserie.

There might not have been several scouring trips to flea markets for art deco light globes or naturally distressed mirrors, but the colour scheme of dark red and even darker brown, the placing of banquette seating, alcoves and bar-side stool-chairs – not forgetting the chequered tile flooring – was as much visually welcoming as it was a reminder that pastiche needn’t necessarily be slavish.

As for whether Paris has arrived in a beautiful heritage town in South County Dublin – home, lest we forget, to internationally famous people such as Bono, Neil Jordan, Enya, Jim Sheridan and Van Morrison – well, let’s just say that it’s close but no cigare. To their credit, you sense that joint owners, brother and sister David and Kim O’Driscoll, want to create something more than just a facsimile, and that’s fine with us. Adapting originality or blueprints to suit your own purposes – and adapting in such a way that it comes across as more affectionate than calculating – is also okay.

There are niggling issues, however, that need to be addressed in a restaurant of this calibre. We were seated away from the hub of things, at an angle from which (after we had ordered from the menu) we happened to discover the Special’s Board. Unfortunately, we weren’t made aware there was one, which could be viewed as either a missed opportunity or a lack of attention. In a similar vein, when we asked what one of the sauces was for a starter (salted chilli squid) the server hummed and hawed, and had to go and ask the chef. Which is fine, too, but in a restaurant of such flair, surely all staff should be tutored in the minutiae of the menu, and be able to answer customer queries at the table? It was fish oil and lime, seeing as you’re asking.

So far, so disconcerting. The room seemed busy for a Monday night, though, and a stroll to the toilets proved instructive as we glanced about ourselves – everyone was in good form, the bar seats were taken by customers nursing what might well turn out to be the restaurant’s signature cocktail (espresso Martini –classy), and there was conversation flowing from north to south. Oh, and in the gents toilet were a series of wall cartoons that were - depending on viewpoint, of course - either ooh-la-la risqué or questionably sexist.

And the food, I hear you ask? Sacre bleu, mon amie, the food was astonishing. Chilli squid? Crisp’n’tender, and a total yum treat. French Onion soup? So hot you could have walked to Killiney and back and it still would have burned your tongue; it was incredibly, intensely hearty – nostril-flaring flavours, Gruyére cheese you had to bite down on to get it off your spoon, and bread that soaked up the rich goodness.

Mains of pork belly (with rugged spinach, apple and sage sauce, and a viscous boudin noir – a fancy name for black pudding) and rack of Wicklow Lamb were equally splendid; the former was shrouded by a crackling skin that wasn’t so crunchy it could chip teeth, and the latter was cooked as asked (medium-rare). A shared dessert of Lemon Tart was just enough to question the existence of higher intelligence. A bottle of 2012 Nordoc Cabernet Sauvignon only added to the existential bliss.

So, no, Paris hasn’t arrived unannounced in South County Dublin, but you’ll be pushed, I’ll wager, to find a better and warmer-hearted neo-French eatery in Ireland.

(This review first appeared in the Irish Examiner, September 13, 2014.)