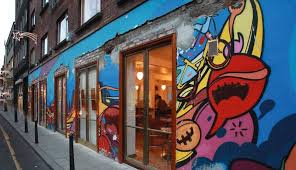 Sitting comfortably? Let’s begin, shall we? On Tuesday we booked dinner for Saturday, and received a phone call on the Thursday – two days before the appointed reservation – asking us to confirm that we were, indeed, still intending to make ourselves known. But of course, we replied, we will absolutely be there. Imagine our surprise, then, when we arrived at the reserved time (8pm) only to be greeted with a blank look from a confused server and the following question: “are you sure you booked?” Sloppy, disorganised and needlessly inefficient - we’ll admit that it doesn’t start well.

Drury Buildings was once a core part of Dublin’s rag trade centre, but since that particular business unravelled it lay unused and derelict. Enter, over the past two years, bar owner and restaurateur Declan O’Regan, who got stuck in reclaiming if not the heritage of the six-storey building then certainly the essence of its industriousness. From the outside it looks not unlike something you’d see in the Berlin suburb of Kreuzberg or New York’s Williamsburg: consciously distressed and (apparently) deliberately unfinished. It’s the first sign of a creative wilfulness (sometimes disconcerting, sometimes revelatory) that runs throughout the interior, although if the interior mirrored the exterior we’re betting its fine dining option (on the first floor) wouldn’t be nearly as well attended. Bare bricks are fine and dandy, but we have enough of those at home, thank you very much.

We arrived at the first floor fine dining space via stairs from the ground floor bar - which also serves food, albeit accompanied by music played at such a high volume that you’d have to communicate by intricate hand signals if you wished to impart crucial information. Upstairs, meanwhile, having negotiated our way through the misplaced reservation incident (there’s a Bob Dylan song in there, somewhere), we were seated advantageously at a far wall by which to see the room. And what a lovely room it is. If downstairs is Hieronymus Bosch with optional Beats headphones, upstairs is Monet via Erik Satie: warm, refined, mellow. Brickwork, also, is exposed, but it’s nowhere near as self-consciously obvious as elsewhere in or outside the building. Subtle lighting is closer in ambience to that given off by candles, which means – for some myopic types - spectacles might come in handy. This less-is-more approach doesn’t always work, but the sense of Nordic calm here is chic and comforting.

The quality of the food matches the interior’s sensibilities – my starter of peach salad is a beautiful contrast of sweet and plain, while the other starter, burrata (a fresh mozzarella-like, milky-flavoured cheese from the Puglia region of Italy), oozes its creamy interior across a selection of fruits, herbs and nuts.  Mains of roast baby suckling pig belly (cosseted in spicy radicchio, a large-leaf chicory) and panfried hake fillet are consistently good, although the crackling of the former might best be off menu for owners (and presumably) wearers of dentures. The hake comes with blood orange & fennel, and brown shrimp butter, and has a composition that dovetails in the best possible way. We share a dessert of Dolce de Leche, which is possibly the most ineffectual and most ungainly presented ‘sweet’ we’ve had in months - it arrives like lumps of Angel’s Delight in a compote jar, and is, as the movie title has it, gone in 60 seconds.

As if this isn't such a poor end to an evening that starts out as irritating but which improves, we notice something odd as we progress from starter to dessert. Within the space of approximately one hour and forty-five minutes, the ambient sound upstairs has been infiltrated by the booming rhythms that rock the ground floor. By the end of the meal – and certainly by the throwaway dessert, or, perhaps, a dessert that needs to be thrown away – the noise levels are almost crushing. Which is, when all is said and done, fair enough - Drury Buildings is situated in one of Dublin’s most throbbing, thriving food and bar areas, and so you pays your money and takes your choice. A restaurant ideal for groups, then, but not necessarily for couples.

Oh – one more thing: this shared, communal toilet lark (which Drury Buildings and others of their ilk favour) is all very egalitarian in theory, but in practice it benefits no one. Male and female each have habits that are not mutually inclusive. Anyone, or any restaurant, that tries to tell you different is kidding you.