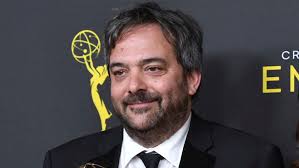 Intro: In memory of Adam Schlesinger, who passed away early April, 2020.

You’ve seen it on MTV – the way Rachel Hunter might look at you in the video for Fountains of Wayne’s new single, Stacey’s Mom. If there’s any justice, the song will make the New Jersey band very famous and lots of money, for if there has been one pop/rock band in the past ten years that has needed a little bit of both it has surely been FoW. Stacey’s Mom is, perhaps, one of the least thematically representative songs of the band’s output since their self-titled debut album in 1996, but it nonetheless spurts with their trademark sense of humour and melody.

Where the song fits neatly into FoW sharply focused and highly quality-controlled output is through its attention to small details. Like Squeeze’s Glen Tilbrook and Chris Difford, the twin songwriting partnership of Schlesinger and Collingwood trains a telescopic sight into the lives of ordinary people and focuses on their traits, foibles and habits. Here be songs about the ridiculously aspirational, the disillusioned, the downtrodden and the hopelessly lost. Mixing sublime pop melodies with a heightened sense of the ironic and the poignant, the band’s new album, Welcome Interstate Managers, is a virtually seamless concoction of memorable tunes and rock’n’droll

“We’re happy with this one, that’s for sure,” says Schlesinger. “It’s hard to have a perspective on any of our records, as each of them represents a different period in our lives and you’re in a different frame of mind each time you go in to make them. There’s always that period of insecurity in your mind where you think that perhaps no one is going to get what you do, that maybe it’s a disaster.”

Is it frustrating when people don’t get it? “It can be. The reaction to this record is pretty favourable. I think what bugs us far more than if we get a negative review is if we get a positive review that terms us as a quirky, novelty comedy thing – that’s not what we’re trying to do. Yes, there’s humour in the songs, but calling us wacky is a turn-off. We balance humour with a sense of real emotion and we try to put songs on albums that aren’t jokey at all.”

Creating simplistic tunes that people hum and whistle might be one of the oldest professions in the world, but it’s not easy. The best songs, we are told on a regular basis by the very people who do this sort of thing for a living, are usually the ones that are written in ten minutes. What a shame that sometimes they have to wait a year for those ten minutes to arrive.

“It’s an inexplicable process in a way,” fumbles Schlesinger. “You write a few lines and they just make you smile or feel something and you know the song is okay. I don’t know how to explain it. Maybe that’s one of the best things about pop music – we shouldn’t be able to reason it all out.”

Perhaps it goes back to the details. Universal themes are fine’n’dandy and can be applied to the world and all its problems, but personalities are as specific as they are varied. The big picture is all well and good, intimates FoW songs, but what about that curious and tantalizing scene in the bottom left-hand corner?

“When you’re writing pop music, details are important because they’re what make the song come to life. You have to put images in there that give you some kind of mental picture of what’s happening. If you try to keep everything general and grand then the song tends to come across as lifeless. That’s how we end up with a lot of little scenes that people zoom in on.”

Like everyone else working in the filching world of pop music, Schlesinger and Collingwood started out by imitating their heroes and sounding like diluted versions of their favourite records. Yet for the past seven years, FoW have added their quite special constituents to the mixture, resulting in a compact body of work that resonates with the kind of power pop majesty that reduces even hard-hearted listeners to puddles of warm goo.

Is it easy for the two FoW songwriters to develop the kind of emotional call-and-response that ably affects the listener? “I think we’re both capable of writing in different ways,” offers Schlesinger, “and we just had to have faith in experimenting with different types of songs for this album so that it would still sound like Fountains of Wayne. It comes easy in the sense that you wake up in different moods pretty much every day – sombre, goofy, whatever. It’s a good thing to follow your instincts and not try to pre-plan what kind of record you’re going to make. That way you could force yourself to be in a mood that you’re simply not in.”

Like Squeeze’s Difford/Tilbrook partnership, latterly Schlesinger and Collingwood have written songs separately, yet choose to share credits and royalties in time-honoured Lennon/McCartney fashion. “I’ve seen too many bands fall apart because of songwriting credits and it’s just not worth it. If I throw two words into one of Chris songs do I really need to get 5 per cent for it? It’s stupid… The only conversation we had prior to making this record was that we’d write whatever we wanted to and we’d just see what we ended up with. We weren’t worried about trying to make the songs match. We don’t often have arguments where one of us wants a particular song on the record and the other one doesn’t. Occasionally that happens, but it’s usually clear which ones are good.”

What? No arguments at all? So much for the creative differences of temperamental artists. “Well, we might have an argument about one or two,” he relents. “We recorded about 20 songs for this one, so the only real debate was how long the album was going to be. We wanted to put out a longer and more varied record, but we had to draw the line somewhere, otherwise it would have been ridiculous.”

There are certain songs Schlesinger feels he’s nailed down, and others he admits that aren’t the greatest, “but when you start out as a band all you want is something you can do that feels honest and natural to you. That’s very difficult to achieve. The proudest thing, we feel, is that we seem to have found a niche that’s pretty much our own.”

(This first appeared in The Irish Times/Ticket, 2003.)