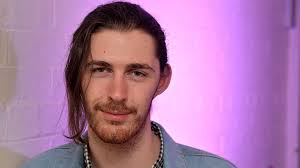 “I’m still getting the hang of it, especially the fuss in the dressing room beforehand – meeting label people, music industry people, media people. All of that takes a while to acclimatise to, because you don’t fully realise how busy you can be right up until you’re walking onto the stage. I’m new to all of this, but I know the more I carry on the more I know how much I enjoy performing.”

It is a rare thing, indeed, to meet someone on the way up who has no more a pretentious notion of themselves than a baby dozing in a buggy. But Andrew Hozier-Byrne – known simply as Hozier these days to all and sundry, and that includes US chat show hosts Ellen DeGeneres and Jimmy Fallon – is the modest sort.

We are having a chat in Vice, a coffee shop located at Dublin’s shabby-chic but super-hip Twisted Pepper venue. With a mixture of ska, dub and reggae throbbing away in the background, Hozier – an immeasurably tall 24-year-old man, soft-spoken, polite to a fault, sensible, smart and well read – relates how he has arrived at a point where he has become so hotly tipped for mainstream success that he’s in danger of melting.

Less than 18 months ago, there was no such palaver; Hozier was just Andrew Hozier-Byrne, a musician and songwriter from a small town in County Wicklow. He had gone through the usual mid-late teenage phase of, he says, being “feckless.” Yet he didn’t want his parents to think he was a “waster”, so secondary school done and dusted, he applied, and was accepted, to Trinity College Dublin to study for a BA in Music.

Engaging with music was, he recounts, a no-brainer. “When I was a kid, my dad was a drummer in a blues band, so the musical influences seeped in. Some of my earliest memories are going to see him perform, and blues music was, pretty much, all that would have been playing in the house. So the influences were there from the very beginning – blues, soul, jazz albums from the likes of Muddy Waters, Howlin’ Wolf, John Lee Hooker, Billie Holiday, and then the older, Delta blues musicians.”

Hozier isn’t certain why he liked such adult music so much. When you’re absorbing things as a child, he implies, it’s virtually impossible to fully articulate why you like it. Yet it ended up as music, he outlines, that was close to his heart. Phases of wanting to be a doctor or an actor were bypassed again and again by the apparent need to be a musician. “All of the people I looked up to – and aspired to be – were singers, songwriters and musicians. People like Nina Simone was, to me, an incredible performer; Tom Waits, also. So when I was about 15, I started writing lyrics, and that brought me naturally into singing.”

There then followed the usual route for the wannabe muso: covers bands, early attempts at songwriting, trying to get under the skin of being creative. This period of time – spent between his last few years at secondary school and his first year at TCD – was all about developing slowly, steadily, surely. Despite his best intentions, and an eagerness not to let his parents down, college just wasn’t working out. “I wanted to achieve,” Hozier says in a voice that’s equal parts pleading and guilt-ridden. “Although I lost interest towards the end of secondary school, I was always capable of achieving academically. Yes, music was at the core of what I knew I wanted to do – that’s one of the main reasons why I went to Trinity – but in my heart I knew I couldn’t stick four years of academic music study. It was obviously a huge help towards understanding music structure, and so on, but all I wanted to do was write songs.”

What happened next is one of those ridiculous/incredible confluences of events that make you wonder about the intricate nature of the mysteries of the known Universe. Call it destiny or a fluke, but while at secondary school, Hozier performed a few songs at a summer garden party. At the same party was the mother of one of his school friends; this woman liked what she heard, and using her influence as a notable music industry figure introduced Hozier to various other music industry bigwigs, to whom the affable singer sent demo recordings. At the age of 19, however – and without a shred of false humility – Hozier felt he was being thrown into the deep end without water wings. “It was too early for me,” he reflects, “and I felt completely over my head. Simply put, I needed more time to work on my original material.”

There followed a frustrating period of time: not being in college, not having the wherewithal to record any of the songs he was working on, not having any other option, effectively, except to write songs and to learn how to get better. The aim hadn’t changed, implies Hozier, but he felt the parameters drifting further and further apart. A couple of years passed doing little other than demos and trying things out. “You could say,” he reveals with a smile, as a rowdy slab of reggae reverberates around the room, “that progress was slow.”

Slow, perhaps, but not unproductive. As if hitting upon something new, audacious and special, Hozier says his luck began to change. “Actually,” he reconsiders, “maybe it wasn’t luck; maybe it was a more direct or effective way of working. To be honest, there was an awful lot of faffing about, and if I could go back in time I’d give myself a smack. Things started to really happen when I got into properly recording and producing myself. That’s when Take Me To Church came about.”

Take Me To Church? Unless you’ve been living under heavy sedation for the past 18 months, you’ll have heard this song. It’s a classic soul/blues tune that has opened up the world to Hozier, and vice versa. It’s a tune that has enabled major record deals with Columbia in America, and with Island/Universal in UK/Europe (he remains with Rubyworks for Ireland). Cue all manner of conflicts, though – for someone who just wants to write songs, and to perform on stage, how does he manage to balance creativity and commerce?

Something close to a pained expression creases Hozier’s face. “I feel it’s still a bit early for all of this attention,” he says as if apologising for his talent. “I’d love time to grow the sound on stage through rehearsing. That said, I’ve moved a lot faster than I would ever have thought. If I’d have had more time to write, to hone the onstage and writing skills, and so on, then that would have been perfect.”

Such an ideal situation rarely works, however, and there’s a sense with this most likeable of musician that he knows it would be wise to strike while the iron is hot. It should also be noted that Hozier’s swift rise in profile (his self-confessed “feckless” nature notwithstanding) has taken well over five years of hard graft. Is it difficult, though, to differentiate between what he wants and what the music industry people around him quite possibly need? “That hasn’t been a huge problem,” he replies evenly. “I’m quite happy that I’m doing the work, that I’ve made some hard decisions and am now, to an extent, trusted to deliver good material. The first EP, the one with Take Me To Church on it, was actually recorded in an attic – I cleaned the sound a little bit, we put it out, and the success of it was ridiculous. The live shows and the second EP, which includes Sedated, are going down very well. So, like I say, I’m trusted now, and there isn’t a lot of pressure to come up with the next ‘hit’, so to speak.”

The next year will see his feet touch barely anything except stages in music venues across the world. He might look slightly frazzled around the edges, but he wears it well enough, and you can clearly sense that it’s all good, all positive. His eyes light up. “Oh, yes, there’s no doubt about that! Opportunities are here now that, even a year ago, would have been crazy for me to think about – writing songs for people, with people, and receiving support from people I never thought would be interested in me.”

Which means, ultimately, that he doesn’t rightly know what he’ll be doing this time next year? “That’s absolutely correct.” Hozier pauses for a few seconds, drumming his fingers in time to the rock-steady beat that’s playing on the café’s sound system. “I know one thing, though,” he offers, looking me straight in the eye. What’s that, I ask. “I’ll be busy.”