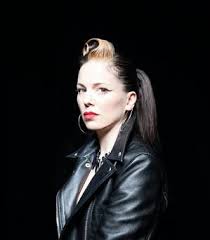 It has taken several years, but as Dublin Liberties singer Imelda May knows only too well, patience is a virtue. In 2009, the then 34-year-old was little more than a lick on the lips of a mainstream audience. She had travelled over from Dublin to London ten years previously, looking for (in the words of a song she knew off by heart, Steppenwolf’s Born To Be Wild) “adventure and whatever comes our way”, only to discover that things don’t always work out the way you’d ideally want.

Like many other hundreds before her, Imelda had a dream: get out of working in launderettes, cafés, nursing homes, and take on the onerous, possibly glamorous duties of working full-time in the music industry. As we know, for many – for a multitude of reasons – such dreams don’t come true, and so they are left to wander along life’s side roads where ambition and aspiration rarely strike up long-term relationships. And yet here we are – chatting with the petite singer, who, only a few months ago, was schmoozing with Queen Elizabeth II, Prince Philip, President of Ireland Michael D Higgins, and a rake of other dignitaries. In Windsor Castle, no less.

We can only guess that rockabilly and rock’n’roll weren’t exactly high on the list of conversational priorities, and that the Queen herself and her ladies-in-waiting weren’t quizzing Imelda on how precisely she manages to structure her hair in what is by now a signature (if not patented) style. Such topics don’t matter to Imelda May. “Good Lord, no,” she says. “To be honest, I never thought that the political friendliness between Ireland and England would ever happen in my lifetime. I was delighted to be there, and was very happy to do it.”

Everything after the grandiose setting of Windsor Castle is, perhaps, an anticlimax, but Imelda is nothing if not rooted in her background. And so, as her latest album, Tribal, is released, she has travelled back home to the Liberties area of Dublin. Amidst being hugged on the streets by very old friends with faces straight out of a Diane Arbus exhibition, and paying her respects to her much loved local chipper (Fusco’s, Meath Street), she then walks a few minutes across to Francis Street, where we sit underneath cool, contemporary art on the very white walls of one of Dublin’s most regarded independent art spaces, Cross Gallery.

Despite the past few months of high profile, rather hi-falutin’ engagements, Imelda May is very much at home. The new album is a major success, creatively and commercially, and the 39-year-old mother (of a particularly cute almost two-year-old daughter, Violet Kathleen) is eager to not only consolidate her position as a major recording star but also to capitalise on the fact that her singularity is – unusually for a mainstream pop act – her greatest asset.

Certainly, what you see is what you get. Dressed in brightly-coloured jeans, with a pair of Converse runners on her feet, a Cramps t-shirt under her Levi’s leather jacket, a ring the size of a rock on the index finger of her right hand, and with a skull’n’crossbones necklace dangling just-so, Imelda May looks the picture of health and strong, distinctive femininity. It’s reassuring to discover, also, that after 15 years of living in London, her Liberties twang remains as broad as ever.

“I knew I wanted Tribal to be a kick-ass album, that’s for sure, but as well as that I wanted several of the songs to sound like classic 50s torch songs. Old fashioned with a contemporary twist, if you like. My previous album, Love Tattoo, had a bit of gloss to the sound, but with Tribal I wanted to remove that gloss with sandpaper! Also – and this is important to me – I wanted to highlight the strength of the feminine spirit.”

There are now, Imelda observes, more women in pop and rock music than she can ever remember. But where, she asks, are the genuinely strong women? “There are loads of ballads, which are nice, there’s a hell of a lot of pop, which is not my thing, and then there’s a lot of heartbreak, poor-me-he-ditched-me-I’m-a-victim kind of song. Where are the Chrissie Hynde, Joan Jett and Debbie Harry figures? Where are the real strong female role models? Well, I reckon I’m up for being representative of that! There are plenty of women out there who think the same as I do. I don’t want to be seen to jump on anyone’s coat tails, but the women I mentioned have been incredibly influential to me, and I’m ready to represent the next lot. I’m not into the victim songs, I want to rock out.”

It was, pretty much, always like that – Imelda May was the odd little girl in primary school who was more into Gene Vincent and Eddie Cochran than Wet Wet Wet and A-Ha. She started writing songs at the age of 13. “And not just songs,” she adds, “but terrible songs! I remember when I was 13, I met a fella in Courtown, down in Wexford, and I came back home and wrote a song about him – ‘holding hands along the sand’, that kinda thing. But that was the start of expressing my feelings through songs. I never told anyone for a while; I kept those songs to myself, and I’d sing along with them.”

At the age of 15, Imelda bought her first leopard-print coat, got into blues artists such as Elmore James and Billie Holiday. At 16, her romantic sensibilities were messed up, and in an effort to discover exactly what made teenage boys tick, she went to her father for guidance. He asked her was she heartbroken? Yes, she replied. “Well, then,” he said. “You’ll be able to sing the blues better, won’t you?”

There followed an apprenticeship that included long stints gigging in various Dublin music bars while holding down a number of daytime jobs – “waitressing, laundrette work, face painting,” reveals Imelda. “Anything to make a crust.” She was offered two record deals but turned both down, she admits, “because they wanted to turn me into the next pop star on the conveyor belt, and that thought horrified me.”

When she was 23, Imelda headed over to London, leaving her beloved Liberties behind. “It was tough,” she recalls of the decision to emigrate, “ but there were very few jobs, very little money. We stuck together as a community, though; we fought together, and the Liberties has a spirit that I love. Every family I know there worked hard to get the area back on track.”

London, she reflects, “was a place where I knew I had to push myself. I felt I was getting too comfortable in Dublin. Plus, it’s a small scene – everybody was great, but I just wanted to up my game. I needed and wanted to learn more, and by that time, I had hooked up with Darrell (Higham, her husband), and had fallen in love. I had to start from scratch, but that was great, I enjoyed it. I found London had a more competitive streak than Dublin, and so I knew I had to scrub up big-time – I knew my singing was good, but I knew my stagecraft had to improve.”

Those early days were not, necessarily, halcyon ones. She met great people, she imparts, made great friends, and the community of musicians she was welcomed into was very supportive. “I loved it, but I was always broke! And busy, always busy – I’d be travelling all over the Underground on the way to gigs, running to the venues, dashing into the toilets, putting on my shiny frock, dabbing the flour in my hair, and then out on stage singing my heart out.”

Imelda is still doing that, but the difference from then to now is that she’s not so anonymous or strapped for cash anymore. She smiles wryly; we detect a slight shrug of her shoulders in the leather jacket. “I was at fancy events similar to the one in Windsor Castle before, but I was always in the hallway, standing and singing by the piano – the woman that people ignored on their way in! That situation has flipped, of course, and yes, it’s great, but the reason why it’s flipped is because I’ve been such a hard worker – those years slogging on any and every circuit in England and beyond have paved the way for what’s been happening to me and my career over the past few years.”

The nine-year-old girl from the Liberties with the Gene Vincent and Eddie Cochran fixation has grown up into yet another Irish music success story. Yet Imelda knows it probably wouldn’t have been the same kind of success story if she hadn’t moved to London all those years ago. She has good reason to thank her British friends and neighbours, then. The politics might not have been moving with us, Imelda agrees, but the proof is irrefutable: people from Ireland and England have been falling in love with each other for a very long time, and raising families in or between the two countries.

“Maybe it’s time the politicians caught up,” Imelda concludes. “I thought Queen Elizabeth made a great job in bringing that way of thinking forward. She paid respects to our monuments, to our traditions and to our dead. I was very happy to pay my respects back. To me, and to everyone I met at Windsor Castle and at the amazing concert at the Royal Albert Hall, it felt good and positive, especially for the next generation. It’s quite simple, really – I have a daughter. Her daddy is English, her mammy is Irish, and I’d like her to be proud and comfortable with both backgrounds. I think it’s about time we all moved on and gave it our best, don’t you?”