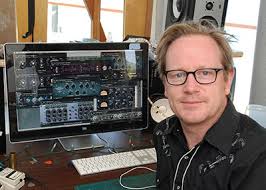 Northside Dubliner Garret ‘Jacknife’ Lee is the link between those artists smart and proficient enough to stand at the intersection of art and technology – he knows the music, he knows the equipment, and he knows how to fuse them together in order to make a very decent racket. This is a talent that has made him one of the most sought after music producers of the past 15 years. Lee lives in Los Angeles these days with his wife and children, but back in the day, in Dublin town, he manned the sound desks of venues such as The Underground, where more bands than he cares to remember cut their teeth, made something of a mark, and then dissolved.

Lee had his own ‘contender’ bands in Dublin of the mid-80s, too; the once-trumpeted Thee Amazing Colossal Men morphed into the once-trumpeted Compulsion.  “I was something of a cocky teenager,” recalls Lee, a very likeable guy who rarely speaks to the media, which is indicative, perhaps, of his lack of need to praise himself and his much regarded work. “Thee Amazing Colossal Men was a gang of lads, and we behaved like we owned the world. But we had such terrible music industry experiences. I didn’t think I was learning anything at the time. I don’t think I was even paying attention! I just assumed that this was the way life was – you start a band, you make a record and you take success for granted. It was only later, when I was on the dole, that I realised how good, how incredible, it was. Strangely, with the work I do now, I realise what a terrible experience we had with the recording of our first record. I always think of those times when I’m working with a new band, and how things can get taken away from you.”

Lee’s career arc is intriguing. After Thee Amazing Colossal Men were dropped (they had signed to a minor offshoot label of the once all-encompassing Virgin) came a more punked-up, independent unit called Compulsion. The rigmarole began again: they signed to a bigger label, Interscope. They, also, were subsequently dropped. Cue scratching of heads and kicking of heels; arrogance was gradually chipped away, to be replaced by a more pragmatic approach to life. “I didn’t really know how to do anything else,” admits Lee. “I had toyed with quitting altogether and becoming a cook – I had really thought I was done with music. But then I got into doing mash-up bootlegs, and I got credited with doing one that I actually didn’t do. I felt bad about that, but from that point on people started calling me, telling me that they loved what I had done to that particular mash-up, and would I like to work on one of their songs?”

His sampling work begat mixing projects, which kick-started Lee’s work in production and a tentative if interesting solo career. According to Lee, however, his solo records weren’t particularly satisfying. “They weren’t bad,” he allows, “but they weren’t good, either. I was by myself, and it’s very hard to make good things on your own – it’s the collaborations that make them work. Also, I don’t think I’m made for performance or doing promotion.” Ah, is he talking about the self-titled solo album of a few years ago that was released under the auspices of a major label, but which he wanted nothing to do with? You can almost hear Lee shake his head, almost see the dandruff fly. “I didn’t want to talk to the media, I didn’t want to go on tour. I now realise that was a stupid thing to do, and of course the record died… So the career arc, as they say, has been a bit bizarre in that none of it was planned.”

But then along came the arena-size big hitters (Snow Patrol, U2, R.E.M., Taylor Swift, One Direction, Kodaline) and the lower key quality acts (Crystal Castles, Regina Spektor, The Wombats). Lee terms the work in his pinball creative life as “a pretty wide stretch”, and also pinpoints that in his domestic life, having become a father has helped iron out certain character creases. “I used to take criticism very much to heart, but after I had kids I cared very little about stuff like that. I found a lot of strength in fatherhood, and stopped taking a lot of things personally.”

In the past ten years, Lee has worked on albums by five of the world’s most successful rock/pop acts – U2, R.E.M., Snow Patrol, Taylor Swift and One Direction. Is it a truism that the more successful a band becomes the more secure they are in their collective skin? Surprisingly, the answer is no. Generally speaking, says Lee, an operative pattern emerges. “They all seem to go through over confidence at the start, lose their way in the middle, try to remember what they were good at, get past that, and then begin freaking out about whether they’ve reached a peak and are now on the way down. Bands fight at different stages, and it really is about fighting for why you’re doing something. Again, at different stages, bands fall out and it becomes more about meetings and business, and they get through that, too. But – and again I’m speaking generally – if they can get to a point of instinct they’ll be fine. So, as a producer, you try to get bands to get into a position where they’re not second–guessing themselves.”

Another cycle for bands, reveals Lee, is when they start being truly great, but over think what they should be doing, or how they’re perceived. “That’s maybe when problems develop. It’s only a small window when people are firing on all cylinders, when they’re not really thinking as such, but rather being just who and what they are.” Lee says he doesn’t really have a specific style of producing. “Some producers don’t really do anything – they just make bands feel better when they’re in the room. And that’s important, as well, to ensure people up their game. However, I’m more of a hands-on producer.”

When he’s in the studio producing an act as successful as U2, Snow Patrol or Taylor Swift does it ever cross his mind: that could have been me? Or is he satisfied creatively and every other way? “I’m so happy it’s not me,” he discloses. “Being in a band now is not what it was like fifteen years ago. It’s a small business for some, a big business for others: you make a record, you tour it and you promote it. It’s a tough job to do – I remember being up for some promo for the Tired Pony album a while back, and it was fine by me that people just wanted to talk to either Gary Lightbody or Peter Buck. We’d be playing in a town somewhere in America, and I could walk into record shops or bookstores, whereas they’d be sitting in a hotel room for eight hours promoting Tired Pony. I’m happy to be doing this and not that.”

(This article first appeared in The Irish Times, 2011.)