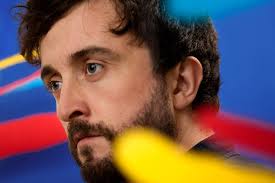 Richie Egan, the man behind and in front of Jape, is rarely lost for words, and so, one after the other, they tumble out in a stream. Unlike some people, however, who only talk so they can hear the importance of their own voice, Egan’s words make sense.

Although you’d be hard pressed to hear him on daytime radio, Egan is one of Irish music’s most highly regarded songwriters, and there’s a sense of him as a standard bearer for those musicians who want to take the path less travelled. He has previously been, he says, in areas where there doesn’t seem to be much point in hanging around, yet his persistence, patience and perseverance has paid off. He is now at a period in his career where he makes a living out of playing music. Lots of music. Compulsively so? Egan, who has been living in Malmo, Sweden, for the past few years, says he writes like he breathes: reflexively, without thinking, for dear life.

His new work, This Chemical Sea, arrives four years after 2011’s Ocean of Frequency, yet despite the elemental, self-referencing wordplay of the album titles there’s immense difference between the two. Interrupted by the unforeseen death of his mother, the writing and recording of This Chemical Sea continued with, too inevitably, a different frame of mind. While there’s little apparent ruminative melancholy running through it, there are nonetheless fine threads of mellowness that invisibly stitch the constituent parts together. It’s a full album, in that it’s cohesive and complete, avers Egan, but that doesn’t mean to say it wasn’t a struggle putting it together.

“I’m really envious of people who can write amazing songs straight off the bat. I can write about 70 songs, and maybe ten of them are halfway decent. But then, for me, albums are snapshots of the songwriting process, and so songwriting is all about working away at it.”

Some musicians write flowingly, suggests an all-too envious Egan. Not him, though, he says – he’s a grafter. “I love the craft of songwriting, and I’m obsessed with the art of making music.” Even now, 12 years after Jape’s debut album, Cosmosphere, and with two Choice Music Prize Awards for Best Album (2008’s Ritual, 2011’s Ocean of Frequency) in his trophy cabinet, Egan feels he has much to learn.

“Going to the studio every day is a process of learning what works and what doesn’t. It’s trying to find ten songs that work and not letting myself put anything on the album that I didn’t think fitted. I had certain criteria that I wanted to get across with this album – I wanted songs that were simple but which also had depth. That’s a hard blend to get – most songs are simple and so you’ve heard it all before, or else they’re too complicated and boring. So it was ten songs that were honest, simple yet had layers. That took ages!”

When did he arrive at the point where he knew the album was coming together? “It was about 18 months ago, but my ma died and so everything got put on hold. I then I got rid of some songs, and came up with some new ones. At the start of 2014, I got around to mixing the songs, and once I heard the results I knew it was ready to go.”

As previously noted, the new album – mixed by David Wrench, the person behind the mixing of last year’s albums by FKA twigs, Caribou, and Jungle – is a collection of superb electro-pop carried along by a sweep of melodic tenderness. It will surprise people in a very good way, won’t it?

“I’ve been making albums for quite a while,” reasons Egan with a nod and a smile, before he gets serious, “and I wanted to make sure this album was a real, pure expression of who and what I am. I didn’t want to filter it by trying to be anything other than myself; I also wanted it to come across that I could actually feel all of the songs. It genuinely sounds like a record that came from me.”

With such sterling electro-pop on display, Egan doesn’t deny that there are stylistic reference points some people might recognise. Unlike other songwriters as they record an album, or perhaps in the lead up to it, he admits that he listens to a lot of music. “I’m confident enough that I won’t rip off other people’s music,” he emphasizes. “When I’m walking to the studio, I always make sure I have a good, fresh playlist with me on the headphones; my ritual each morning is to look at the Pitchfork website and scan the albums they recommend; there’s always something decent because there’s so much out there. So I was listening to a hell of lot of electronic music on the way to work – typically The Chromatics, emotional dance music, stuff that gives you goose bumps when you hear it. Actually, a lot of Swedish acts have that – The Knife, and far too many more to list.”

Along with the music is quite likely Egan’s most personal set of lyrics. He is, however, very quick to dispel the notion that conscientiously thinking about life’s profundities leads to great words. “If I sit down and reckon I’ll write something about a specific thing or area, then ten times out of ten it’s rubbish. Whereas the words will come out easily if I just allow my brain to turn off and let things flow. Some of that requires editing, but the personal lyrics are a process of what happens to you, of course. I don’t really analyze or dwell too long on the lyrical content, anyway. It’s all a trajectory – you’re learning your craft, hopefully getting better. Once it’s done, it’s done, and on to the next one.”

The secret, he divulges, is finishing the work, song by song. One terrific example, Richie offers, of the way in which songwriters can lose the run of themselves, is the story of Stevie Wonder thinking that Superstitious isn’t a finished song. “Whereas to me and the rest of the world, it’s perfect,” says Egan, shaking his head in bemusement. “Ah, look, people have enough to be worrying about rather than where you are in the creative process.”

He’s getting a bit heated up now, but laughs through it. “You’re better off cutting the ties and moving on. Unless you’re an artist, you have to remember that at certain times of the day and night, no one else gives a fuck!”