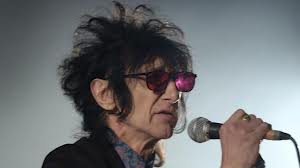 With a back-story that he will totally blank questions about, a bagful of lyric books and a rapid-fire delivery, Salford poet John Cooper Clarke has, against the odds, survived to tell many a tale. He’s a happy-go-lucky guy, he says, a bit grumpy on an occasional basis, but mostly just a thin man with a scrawny neck having a laugh. He understands the “punk poet” tag that has been pinned to his collar from the mid-70s onwards, but latterly, he says, “that’s by no means the whole story.”

You receive the impression that Cooper Clarke has never been taken seriously by the literary establishment, despite the fact that two of his poems (Beasley Street, I Wanna be Yours) have been on the GCSE syllabus. At his mid-60s, he looks pretty much the same as he did 30 years ago (a pipe-cleaner frame, topped with a nasty beehive hair-do), yet he views retirement as something for people with nothing better to do. “I can’t afford to, so I reckon I’ll be doing this until I pop me clogs. Which could be any day now… Book for the shows early – you could use that as a selling line for the gigs. See John Cooper Clarke while he’s alive!”

What he does, he says, is what he loves doing. “And I’ve been doing that for most of my life. What keeps me going? I’ve no idea. I don’t really have any health regime I could recommend or itemise for you, but whatever it is I do it seems to work. What has me going for so long is that there is nothing contrived – there are no special effects in my shows.”

Cooper Clarke remains a culturally peripheral figure that has gained a new audience by merely sticking around. He terms his career as being an accidental one, and professes blissful ignorance at not being able to pinpoint precisely why, in the past ten years or so, his profile has risen even beyond what it was in the late 70s/early 80s. Oh, hold on…

“Actually, if you’ll allow me to contradict myself, I do understand why. It all took a different turn about eight years ago, when two of my poems were put onto the GCSE syllabus. In what was probably the only really smart move I’ve ever done, I agreed to join an English poets tour of secondary schools. I’m not sure who organised it, but quite a few syllabus poets – the living ones, need I say – toured the cities and large towns of the UK.”

“Myself and the likes of Simon Armitage, Grace Nichols and John Agard would perform at the Town Hall, say, of Leeds, and the like. The surrounding schools would bus in the GCSE students to see us. That got me a whole new generation of fans, because it so happened that one of the students at the Leeds show was Alex Turner, who would go on to form Arctic Monkeys, and who, God bless him, always keeps dropping my name as a major influence on his writing. So that did me a helluva lot of good.”

He has now acquired by luck, fate and resilience quite a unique audience. “The age range goes from about 14 to about 70. That’s amazing, isn’t it? No one in this business wants to ghettoize what they do, least of all me.” Above all else, Cooper Clarke will, he imparts, continue to be himself. “I was in that Joy Division movie, Control, playing myself 30 years after the fact,” he says, straying into typically JCC territory. “I get a lot of gigs appearing as myself. They say it takes every bit of acting ability you’ve got. Yes, I look exactly the same. How lucky is that? It’s the beauty of never looking any good in the first place.”