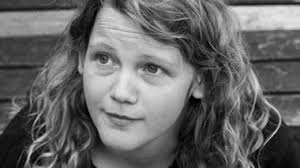 Impoverished urban background? Check. Misspent youth? Check. Salvation through love of music? Check. Such box-ticking comes across as the traditional story of how art can save your world, but in Kate Tempest’s case there’s a twist: this 27-year-old, southeast London-born woman channels her experiences (some not at all pretty) as instruments of energy and insight. The pitch is The Streets’ Mike Skinner scanning the lines of Allen Ginsberg’s Howl, mixing and matching metaphors and slip-sliding similes throughout topics that touch on consumerism, sex, and the class system via a delivery that is, to understate it, vigorously expressed.

Last year, the dramatically named Tempest (her real surname is Calvert) became the first person under the age of 40 to win the Ted Hughes Award for innovation in poetry. She won for her theatrical spoken-story, Brand New Ancients, which mixes classical mythology with contemporary socio-realist themes. Earlier this year, she released her widely acclaimed solo debut album, Everybody Down, a (Mike Skinner-referencing) concept work about friends falling in and out of love. There is, then, an indisputable sense that she is the real deal, a person wholly adept at filtering out the fluff and getting to the heart and soul of the issue at hand. Words, she says, are everything to her – she cannot recall one pivotal moment that she could choose as the inspiration for her love of them.

“I know it might sound a bit luvvie, but I feel words have been with me forever. I’ve always been connected with reading, writing, stories and poetry. I just remember enjoying reading in a particular way, and I remember falling in love with lyrics at a very young age. My dad listened to a lot of Bob Dylan, and I would look at the way he would listen to Dylan’s words. When I got to the age of 14 I knew that words were something I wanted to have with me for the rest of my life, and dedicate my life to. At the time that seemed such an unrealistic goal.”

Tempest’s teenage years were, for the most part, she says, lived under an invisibility cloak. A misfit teen with an unquenchable thirst for the solitude of books and the excitement of music, the arrival into her world of hip-hop completely changed her outlook on life – her own, specifically. By her own admission, her early-mid teens were “wayward”. But precisely how ‘wayward’ is “wayward”?

“It’s hard to talk about your teenage years without certain events being sensationalized or taken out of context,” she begins cautiously, clearly conscious of a rogue headline. “Let’s put it this way – I was hit by the gravity of a few events. As a teenager, you’re finding out things about yourself and life, and it’s a strange time… I didn’t really have much time for school or education or authority of any sort. That’s pretty standard stuff for a teenager, I know, but the difference was that while I was watching lots of bad things happening around me through those years I realized I wanted more for myself. I wanted to be the kind of person who was dedicated to a craft of some kind. So, yes, we got up to mischief. And yes, a lot of things happened, but those years and experiences formed the way I feel about things and write about. It was also a beautiful time, because it forced me to engage with my creativity in a particular way. Is that answer evasive enough for you!?”

Yes, Kate, and so eloquently delivered. Does she regret any of the mischief she got up to? Or were the experiences all leading up to an informed, insightful worldview? “Definitely the latter. You have to get a lot wrong before you realize you’d rather get things right, and so you look back and everything seems to fall into a bizarre chain of events. That’s life, isn’t it? To answer your first question, I try not to cultivate regrets. Accentuate the positive, you know?”

And what of her school years? Tempest admits, to no huge surprise, that she was never into poetry back then. It’s slightly different for school-going teenagers now, she reckons, because some teachers use YouTube clips of poets – performance or otherwise – in order to engage and connect pupils with the form. “For so many kids, poetry – even if they’re the most wonderful and beautiful in the world – is just dead words on a page.” Tempest also reasons that it’s fine not to connect with poetry at school. What’s the big hurry, she asks, not unreasonably.

“Poetry is, or can be, quite complicated – and I don’t mean that it’s difficult to grasp in a highbrow way. I mean the feelings, emotions and themes touched upon in poetry. Feelings and emotions will find you when you need them to find you – we turn to poetry in times of love and grief and many other things. If you’re 14 and you’re sitting an exam, those themes can be quite difficult to get your head around.”

We wonder where would she be if words hadn’t come along? Tempest wonders, too. Perhaps it’s too ridiculous a notion to contemplate for the woman who has said that she wants to talk to the people who don’t want to listen? “I can’t imagine what my life would be like without words. I think that if things hadn’t worked out the way it has, I’d still be writing but no one would be reading it or listening to it. Doesn’t matter – I’d still be doing it.”

(This first appeared in The Irish Times, August 2014.)