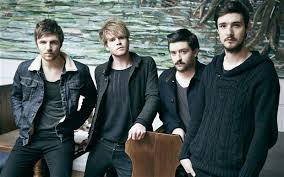 It isn’t often that a teenage band, fresh of face, wide-eyed with enthusiasm and naiveté, bunking off school, makes Irish chart history, but that’s exactly what Co Dublin quartet 21 Demands did almost five years ago, when their song Give Me A Minute reached the top spot in the Irish charts from sales of downloads alone. You’ll be forgiven for not remembering the song, but it should be mentioned that the band were finalists on the reality-based music show, You’re a Star, which itself made history by being the first talent show in the world to make contestants’ songs available for download prior to the winner being announced.

Fast forward five years. The winner of 2007’s You’re a Star, David O’Connor, is still in the game, albeit in a low profile way. 21 Demands, meanwhile, have morphed into Kodaline, and have in the past two years quickly become the focus of industry attention: signed to RCA; All I Want (from the band’s September 2012 debut release, The Kodaline EP), chosen as BBC Radio 1 DJ Fearne Cotton’s Record of the Week; and in December 2012, selected for the BBC Sound of 2013 list. All in all, exciting times for a bunch of blokes whose idea of a good time five years ago was to throw shapes in and around the Pavilions Shopping Centre in their home turf of Swords.

“Mark Prendergast, the band’s guitarist, and I have known each other since we were eight years old,” notes lead singer Steve Garrigan, who projects the right level of burgeoning pop star attitude and grounded, decent sort. “We’ve always written and played music together, but for a long time it was always myself, Mark and Vinny May, our drummer. We got a new band member, bass player Jason Boland, a while back and he’s just the business.”

No one outside Ireland seems aware of the 21 Demands days, a state of affairs the band is reasonably happy to allow continue (the band’s biog on their website, kodaline.com, makes no mention of the reality show or their involvement in it). “We ended up not liking the music we were playing,” says Mark, “and so we went away and learned how to write songs. The music was not the direction we wanted to go. We were going along with it, of course, because it was any excuse to get out of school… That said, in retrospect what the television circus did was that it prepped us, in a way, for the music industry. Back in the day, it’d be fair to say that on occasion we got swept up in the fuss of being on television. Now, there’s a more muted approach, and you genuinely appreciate the fact that people want to talk to you.”

“We were on the show for a couple of months,” relates Steve, “so, yes, it was exciting. We entered a load of song contests back then – we did everything because we just wanted to play music, and the bigger the crowd the better. But after You’re a Star, we decided the music we were writing was quite disposable, and probably not very honest. I think we just needed to grow up a bit, get some life experiences in order to discover ourselves, a bit of soul searching. So we continued to write and play but not so publicly. Eventually, we feel, we found our voice. And that’s Kodaline.”

And how exactly did thy find their collective voice? Well, says Steve, it took a lot of being kicked around by life in general: “break-ups, broken hearts, dodgy jobs, college courses that didn’t fit in with the music. Just life, man. So we wrote about these things. We wrote songs every day, but we didn’t really have a direction.”

Eventually, at some point in the past two years, a demo track of theirs was heard by highly regarded UK indie label, B-Unique. “They were impressed,” admits Steve with a sheepish grin. “We went back and forth with them, though, went through some rejections…” Following that, the band signed with RCA UK, the first results of which is their debut album, In a Perfect World, which has just been released. “With all the pushing and pulling, though, we found that you’re only as good as the honesty you project in your songs. After that, it’s up to other people to make up their minds. You can smell insincerity.”

Touch wood, to date the band is making the right decisions, sticking with a type of commercial pop/rock that aims for some sort of middle-ground that embraces wide open choruses, anthemic responses and (possibly Kodaline’s USP) emotional directness. You can discern the influences: prime time Radiohead, the reach of Springsteen, the electronic glitches of LCD Soundsystem, the soul stylings of Steve’s voice via the likes of Sam Cooke and Etta James, and melody lines that reference The Beatles.

Interestingly, the kind of feedback, positive or negative, they receive, they say, isn’t going to phase them, which proves how far as a unit they have come from the days of 21 Demands. “Oh, anyone can say anything they want,” avers Steve. “As soon as someone listens to a song they will either like or dislike it. It doesn’t really bother us, we’re just happy to express ourselves through music. Every band has a different opinion, a different voice, different songwriting technique. With Kodaline, it’s how we play, what we say, and people can live with that or without it.”

So – BBC Sound of 2013? Signed to RCA UK? No pressure, then, Steve? “No, not really – honestly. We’re glad that we’re on a label that is able to get our music out to as many people as possible. After that, it’s up to the public to make up their minds. We‘re just happy that people are listening to us.”

(This first appeared in The Irish Times/The Ticket, March 2013.)