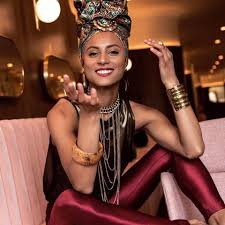 As career changes go, transferring from pharmacy to songwriting makes sense – both professions need chemistry and a willingness to help people feel better to make them work successfully. Just ask Sallay Garnett, the Irish-Sierra Leone singer and actor who discarded one for the other and survived to tell the tale.

Graduating from Trinity College Dublin in 2010, when she was 23, having immersed herself as much in studies as the breadth of music options TCD offered, Sallay started work as a pharmacist. It’s a vocational job, she offers, indicative of accomplishment, of being viewed as useful to society at large. A person could, Sallay continues, plan on the basis of such a good job –“a house, a family, all of the things that adults do.” Plans, however, don’t come to much if a job is like trying to put on a shoe that doesn’t fit. What wasn’t working for her?

“You have all the trappings of being a functioning adult, yet it just felt wrong – like a relationship that isn’t working. It’s no one’s fault – it’s not you, it’s me! At Trinity, I knew loads of people that were musicians, they were getting on with that, and I’d be longing to be in a room or a studio with them. The college music scene was vibrant. I was involved in virtually every single thing there that connected with music – orchestra, jazz society, musicians that went on to form bands such as Wyvern Lingo, Little Green Cars, people such as Hozier – so the area felt right for me. Ultimately, I knew what I needed to do because after I left Trinity the pointer on the scale went to zero.”

Sallay and Cara are chatting in a deli just off Dublin’s O’Connell Street, but eyes aren’t looking in Cara’s direction. From Crumlin via West Africa, Sallay’s striking presence is an effortless blend of clothes, manner, style and composure. Naturally witty, a genuine thinker, a balanced scholar and artist, she talks of her father growing up “humble and poor in rural Sierra Leone” and her mother’s “working-class background” in the suburbs of Dublin. “My dad won a scholarship, and my mum worked all the way through college. There was a sense that what they did, they did in order for me to have a better life. I did, of course, but it got to the point where if I was allowed to choose, could I choose something else?”

That initial sense of self-reproach linked with a fundamentally responsible person that exchanged professional work for the occupational hazards of creative fulfilment. Inevitably, there were tears before and after bedtime. When the sobbing subsided, and with a bunch of dollars in her pockets, Sallay left Dublin for New York. Cue a life changed.

Blending a longstanding interest in yoga with her newfound artistic (that is, temporarily unemployed) freedom, it was while Sallay was visiting an ashram in Upstate New York that she met several similarly minded city folk. While her time at the Catskills-based yogic community balanced her system, NYC itself ignited her intellect and instincts. Renting a loft apartment in Brooklyn, she immersed herself in what was on offer. She made friends. She found herself. She found her tribe.

“Yes, they called themselves ‘creatives’,” she says with a grin, “because everyone does a bit of everything. They’re hustling their butts off, but they’re making it work.” In truth, what NYC offered that she felt Dublin didn’t was (and here she smiles again) “the gung-ho American attitude! At the genesis of a piece of work, that assertiveness can be very exciting to be around. You have to frame what you want to do in a big way, and with a bit of pizzazz.”

Alongside the eye-opening dynamism of the creative mindset was, she remarks, the cultural encounter of “being submerged in African-American society. I’m black but not African-American. I’m definitely Irish, yet I didn’t grow up in a black culture, rather a suburban Irish culture. There are important distinctions: I have a different way of seeing things and of being black in a modern way. Spending time in NYC made me more culturally sensitive to the African-American struggle in a way that I hadn’t before. I felt it was something worth exploring more on a personal level, which has subsequently influenced my work as a result. It also made me re-enter a dialogue with my heritage.”

Such internal discourse has resulted in more frequent visits to Sierra Leone, which is now more accessible for international visitors. “As you get older, you sense you’d like to form a longer relationship with a place that is also your home in the same way that Ireland is.” So has she settled in some ways with the twin and (sometimes) complex topics of identity and heritage? Are they less fraught these days? Sallay’s reply is part rhetorical, part wish: “I wonder do they ever stop?” Fully aware that “there are issues about these subjects”, she looks forward “to the day when we don’t have to be anything other than casual about them.”

On her return to Dublin from NYC in 2013, Sallay knew that music and the creative arts could only be her new profession. By the first half of 2014 she headlined her first show – not as Sallay Garnett but as Loah (the stage name loosely taken from Isabelle Allende’s novel, Island Beneath The Sea). The gig was, she recalls, a clear statement of intent. “When I look back from a distance of five years I remember it as a special performance and a great way to start things. I was really present, and I cared about how I performed. The problem with it – and it is somewhat still a problem – is that of coherence of sound. That’s something I continue to work on, an on-going challenge, if you like.”

Sallay should be so worried. While her early music was infused with soul/funk grit that had feet tapping and heads moving within seconds, her more recent material veers towards timeless pop with a dance edge. She classifies her newer tunes (on which she has collaborated with Irish electronic musician, Bantum, aka Ruairi Lynch) as “sad bangers” – shorthand for pop/dance music laced with lyric/sonic melancholy. Her new music, she affirms, is less a speculative exercise and all about being more direct.

“I can’t veil my meanings in abstract words any more. For whose sake? And what am I trying to hold onto, anyway? The pretence is gone, and trying to be seen to be clever is over. I just want to get to the point in as little time as possible.”

Speaking of time, too much of it has passed, and we are being politely shooed out of the deli. What’s next, then? An album of new songs (with Bantum) is scheduled for release by the end of the year. Long before that, however, Sallay will veer Heavenwards over London when she takes on the role of Mary Magdalene in The Barbican stage production of Jesus Christ Superstar.

Acting? Singing? Musical theatre? Sad bangers? With harmonies in her head and bright lights in her eyes, success for Sallay Garnett is surely written in the stars. It’s academic, innit?