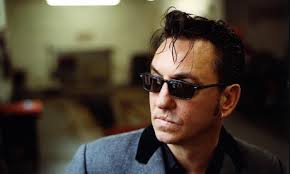 “Age is a terrible price to pay for wisdom,” says Richard Hawley as he picks up a biscuit to dunk into his steaming hot cup of tea. He’s repeating an epigram his father had said to him on his deathbed, and in that stoic English working class way, Hawley stops, draws breath, dunks his biscuit again and takes a bite before the soft bit breaks away and dissolves at the bottom of his cup.

It’s early December, Hawley is in Dingle for Other Voices, and he’s pondering on how his home of Sheffield played such a major part in his life. Music? It couldn’t have been any other way: hands-akimbo veteran rock singer Joe Cocker was Hawley’s Godfather; Hawley’s uncle played with 1960s pop star Dave Berry (UK Top 5 hits with The Crying Game, Little Things and Mama, pop pickers); and because of his music-obsessed father the Hawley household was awash with albums by the likes of Roy Orbison, Ricky Nelson, The Everly Brothers, Lee Hazlewood, Memphis Slim, Little Walter and Bill Monroe.

Hawley is fiercely proud of his Sheffield upbringing, and is a staunch supporter of the community aspects of music, which clearly hardwires him in to Other Voices. He has a genial demeanor that wears its intelligence and wit lightly, yet an undercurrent of despondency informs his music to the point that he is often pigeonholed as a singer-songwriter of certified moroseness.

For some, there is a light at the end of the tunnel; for Hawley that same light is attached to an unstoppable train coming right towards him. Yet he has forged a glittering, award-strewn career out of his doleful yet frequently staggering, beautiful music. His first serious band was Longpigs, who between 1996 and 1999 scored four UK Top 40 hits. Following what he describes as “music industry rape”, Longpigs split up. A happier spell with Pulp ensued, which in turn opened up avenues for a solo career.

“Going solo was more to shut up some people – my dad, Jarvis, my mother. They were really encouraging me to make music on my own, but I found it slightly irritating nonetheless. I’d been writing since I was 14, so I had loads of songs. I was aware that being creative wasn’t just about following what was happening. But it took me years to get around to doing it. It was when my dad got diagnosed with cancer that he said to me, son, don’t leave it till you’re 60 to look back on your life and regret not doing things. And that’s when I started the solo work.”

Signing with Irish-centric independent record label, Setanta, in 2000 he released a self-titled mini album, which was followed a year later with a full-length debut, Late Night Final. “It was great being on Setanta,” he remembers, “because I literally came out under my shell with no pressure whatsoever, and then found to my amazement that I actually enjoyed doing it. So I decided to carry on, and the process seems to have snowballed to where I’m now quite successful. To this day, I find that bizarre.”

Not one to be swayed by fame or fawning (“I’ve worked with many famous people, and I’m not one to be impressed by the associated fame. In fact, I dislike it intensely, or anyone that believes in it.”), Hawley has nonetheless been on the receiving end of so much positive coverage it’s sometimes difficult to sort out the plaudits from the platitudes. Does he have a measure of his own worth, or does he disregard any praise he receives?

“Nobody likes unkind things said about them, do they? It is wonderful to be thought of so kindly by people who take what I do well. It’s not good for a person to be too self-aware; my dad said that if what is written is great then it’ll make your head grow so big that you can’t get in through the door. And if it’s bad then it’ll make you depressed. So I find it’s best to read it as if it were a Marvel comic.” For Hawley, music is the beginning, the middle and the end. “All the other stuff around it is something you have to be wary of. There are many people in the graveyard because they have believed in their own myth.”

Not so Hawley, who is so into humility it’s almost as if he feels he has to apologise for his talent. He’s been to Other Voices a few times now, and is unapologetic as to how he feels he fits in with the series’ aesthetic. He’s almost part of the furniture now, isn’t he?

“I’m a couple of cushions, I suppose,” he smiles as he takes another sip of tea. “What Other Voices represents to me is that it’s a heartfelt thing. In my view, we live in an age where music gets confused with entertainment, and the obvious targets for that is what we see on television. There is, of course, some shallow music that serves its purpose – you have a few beers and you have a dance around your handbag. I won’t put that down, because it’s good fun, and I’ve danced around my handbag many times. But there are other times when music goes beyond that, and it’s when the doors and curtains are closed, and you really need to listen to something that is nourishment. That is being pushed aside from people, I think, and it’s down to commerce.”

Hawley has, by this stage, been to Dingle more often than many non-Irish musicians – what does he make of it? “It seems to be one of the last places that has kept a truly Irish generosity of spirit. For all the musicians that come here, it’s like a hospital for the soul. It’s the place for me. It’s a bit daft to say so much about something so simple. If you’re here, you’d know. Because of the nature of the place, it can never ever get to be like anywhere or anything else in the world.”

It seems to Hawley – whose tea has now cooled, and whose biscuits have now disappeared – that in so many places around the world, a sense of otherness is being replaced with a total lack of individuality. “It’s a great worry to me that quite a few places in the world are starting to look like Middlesborough,” he reasons. “Dingle is unique – it’s the land that time remembered, not forgot.”

(This first appeared in The Irish Times, December 2011.)