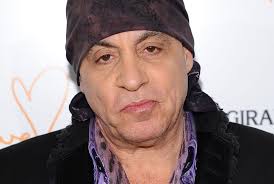 If the phrase ‘ineffably cool’ could be applied to just one person in traditional rock music it would probably be Steve Van Zandt. ‘Miami’ Steve Van Zandt, Little Steven – whatever the moniker – is a natural born chiller, a musician who started out playing with Bruce Springsteen, graduated to Southside Johnny and the Asbury Jukes, then to an on/off arrangement with Springsteen’s E-Street Band and subsequently to a solo career.

Many might view Van Zandt’s contributions to the world of rock music as barely significant. Interestingly, he would agree. “I wouldn’t be remembered at all,” he said backstage at Dublin’s RDS a few weeks ago – yet a couple of hours later he would go on stage and form an integral part of the Springsteen experience. Put it down to his egalitarian political beliefs or his innate humility and good manners, but Van Zandt is one of life’s gentlemen.

Paradoxically, he’s also one of life’s agitators, a sense of which you certainly wouldn’t receive from the man himself, but which is borne out by his solo work (primarily preoccupied with world politics) and his one-time ceaseless work towards social causes via the likes of Sun City, a post-Live-Aid project that raised hundreds of thousands of dollars for anti-apartheid movements in Africa and beyond. These days, Van Zandt’s politicking might have diminished but his energy and sense of commitment hasn’t.

Currently, he’s straddling US television and radio in a formulated twin attack. On television, he’s appearing regularly in The Sopranos as Silvio Dante, a bewigged relic of a previous age. “The only similarity we have,” says Van Zandt, dressed in hippy-chic clothes and wearing his trademark bandana (he’s bald as coot, apparently), his legs spread over a chair in the makeshift dining room that feeds the citizens of the touring Springsteen village, “is we’re both products of the past. I’m a 60s guy, whereas Silvio is 40s/50s, hence the look. He feels the best days of the Mob are over, and romanticises how the old days were much better.”

On US radio, meanwhile, Van Zandt is the instigator of one of the most successful syndicated programmes of recent times – Underground Garage is a two-hour celebration of garage rock/punk rock/60s R&B that is heard in over 100 US cities; the music ranges from Eddie Cochran, The Troggs, The Standells, The Yardbirds and The Kinks to The Hives, The Vines and The Datsuns via The Clash, Ramones and Sex Pistols. Interpolating snippets of film noir/classic movie dialogue with his observational commentary, it’s the kind of radio show that’s equal parts inspirational, influential and ice-cool. For Van Zandt, it’s a torch-bearing mission that paves the way for an almost forgotten strand of 60s rock music – music, he says, “that was freaky then and is freaky now” – and the seemingly never-ending fashion for guitar bands.

You can’t hear this music in America, stresses Van Zandt: “We have a format for everything except rock’n’roll. Of course, you can always go to your local pub or club and see bands – rock’n’roll is great that way and it’s not so difficult to find or do. What is sadly also true is when our generation goes – and when I say our generation I would include bands such as U2, who are probably the last guys in the door – then that’s it. There is nobody replacing us, and I mean nobody.”

Why? It’s not so easy to explain, says Van Zandt. Partly due to the fact that the music business has merged with the corporate world and, he says, that “governments no longer worry about anti-trust and monopolies”, homogenisation has set in. “Homogenisation is all part of trying to make human nature more scientific and understandable, more boxable, controllable and therefore more profitable. What has happened through the years is that the homogenisation process is now very much in the music industry. There are three genres allowed by the gatekeepers in music right now: hard rock, hip-hop and pop – that’s it. We had 12 genres when we were growing up. The result is that everything else has gotten squeezed out, and at least one generation out there has never heard traditional rock’n’roll.”

Consistent quality is certainly a nice thing, Van Zandt maintains, but he knows it’s a fallacy on US radio (at very least). Marketing surveys in the US for American radio is based on the lowest common denominator. What is never factored in, he argues, is the element some people like to call human nature. “We occasionally like to be surprised. We like to hear something new that’s never going to show up on the radio, and this is where Underground Garage comes in.”

It was a tough battle, apparently, to get the show off the ground, but Van Zandt was lucky in that his leverage of celebrity capital just happened to coincide with the rise of The Sopranos as the must-see television programme in the US and The Rising, Springsteen’s subtle, tender post-9/11 record. The way he sees it, there isn’t anyone running a company in America now who isn’t either a Sopranos or a Bruce Springsteen fan. “But you know, Bruce doesn’t ‘test’ well in America. Jeez, you could have fooled those 50,000 people he played to the other night – perhaps they need ‘testing’, too…”

Despite all his achievements, Van Zandt – not disingenuously, but rather poignantly – looks back over the past 30/40 years of his life and claims it as one of unrealised potential. “The radio show might live on through an archive of some sort and that could be my legacy, to be honest. It’s an interesting, quite unique snapshot of what rock’n’roll was and could be…”

But what about his work with Springsteen? “I don’t think it’ll mean anything. For a few fanatics, maybe it will. Look at this way – do you remember Thomas Jefferson or his lieutenant? Springsteen will be remembered… That said, between Bruce and The Sopranos, I have the two best jobs ever, two great organisations of quality work, which is what you want to be associated with. So yeah, I’ve contributed significantly to them. I feel good about that. But will I be remembered? No. Which is okay…”

(This article first appeared in The Irish Times, summer, 2003.)