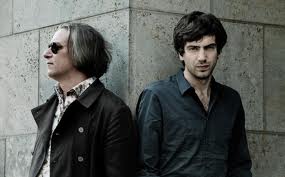 Super group or well-known buskers? You can take your pick, of course, but the way Tired Pony’s honorary member Peter Buck (who was once in a little known band called REM) tells it, the fruitful extra-curricular project is just a bunch of musician friends doing what comes naturally.

“I don’t feel particularly super,” says the guitarist, continuing the line of modesty that has marked him out as being one of rock music’s most highly regarded gentlemen. “But the truth is that we have a lot of experience. Music is what we do; we’re like insurance salesmen – we just sit around talking about the job in hand, during and after work. Plus, you’re with people who you get on with, creatively and personally. No one, honestly, is talking about how many records have been sold by any of us – that simply isn’t the point.”

Initially mooted by Gary Lightbody as a plausible sidebar project from his somewhat more dissected work with Snow Patrol, Tired Pony allows all concerned (alongside Lightbody and Buck, the nominal band member list includes producer Garret ‘Jacknife’ Lee, Iain Archer and Scott McCaughey) to loosen restraints. Buck’s participation came about several years ago via a phone call from Lee, whom he had known from working as producer on REM’s 2008 studio album, Accelerate, and 2009’s live album, Live at the Olympia. “Garret said that Gary was looking for something quite impromptu, and with not a lot of soul searching. The idea was that the songs would be recorded very quickly. Garret recommended me and Scott, who has also worked with REM, because he knew that we happen to work super fast. And we did – it was refreshing for Gary to work so quickly, too, and not to be under as much pressure as he usually is with Snow Patrol.”

With such swiftness and brevity in mind, Tired Pony’s 2010 debut album, The Place We Ran From, was recorded in just over two weeks. Similarly, the band’s latest album, The Ghost of the Mountain, was recorded without undue fuss. Buck’s feelings of these things, he imparts, has always been that if you trust your creative instincts then, generally speaking, the first idea will always be the best one. “Not everyone wants or likes to work that way,” he accedes, “but the sense I have of it is that if you know what you’re doing then you should allow yourself to do it without over thinking it. Some REM records took months and months to record, and, you know, I don’t think they got better for that. My theory? Get the record done, get the record out.”

It helps when you don’t have a massive amount of work to do other than wait for the songs to arrive; Buck’s role on the latest Tired Pony album was, in part, as creative consultant. “Yeah, well,” he drawls, “Gary originates the songs. He will come in with melodies, chord changes, most of the words. Of course, he could record all of them sitting on a stool with a guitar in his hands, and they’d sound great, but I suppose my job – our job, as it wasn’t just me in the studio – is to push or shape them into something different, be it folksy, Americana or even krautrock. Gary had the idea of doing a Laurel Canyon/California singer-songwriter record, so we kinda pushed in that direction together as a unit. And it was fun – I laughed more during the recording of this record than any other one I can remember, but that was possibly because there were at least three Irish people in the studio! It never hurts when the Irish are around, let me say.”

Of course, Buck has history with Ireland – REM was hugely popular here from the get-go of their career in the 80s; Clonsilla’s Luttrelstown Castle was rented out in September 1994 (and used primarily as a base for European promotional duties for their album, Monster); and in 2008, the band undertook the (as-yet-to-be-repeated step by a band of their status) live rehearsal of their Accelerate album over several shows at Dublin’s Olympia theatre. With REM no longer an operational unit of commercially successful major label proportions, we presume that being freed of such label-scheduled ties is something of a gift?

“It goes without saying that I’m extremely proud and happy with my years in REM,” Buck vouchsafes in what actually doesn’t sound like insincerity. “I love those guys and we keep in touch regularly, but there is something really nice in not having an album hanging over your head. And I can keep things in perspective, too. REM was part of my life, but I’m doing other things now. I have a short attention span, anyway, and so I enjoy working piecemeal with people – you know, one week here, ten days there, a few hours here and there. I can stay put or move around a lot, and that suits me. This month alone, I’ll be working on four albums, so it’s totally liberating for me to wake up in the morning, and know that I can do whatever I want, be it writing songs for this or that person, or working on my own stuff.”

With REM’s bottom-line figures now no longer under consideration, Buck seems quite content not only to work where or when the pleasure takes him but also not to have to worry about record sales for any creative enterprise he’s involved with. There’s a level of barely-contained glee in his voice when he says that his 2012 self-titled debut solo album sold a mere 6,000 copies. “It came on vinyl only,” he explains, giggles not too far off, “on a tiny record label that doesn’t bother sending out promo copies or anything like that. As far as I know it was never played on the kind of radio stations that play REM. Now that’s liberating.”

Never the kind to count sales when REM was in its multi-million selling heyday, Buck admits to immodest gratification when he knew that with the right REM album and with luck on the band’s side, about 10 million copies of them could fly out of record shops. “Those kind of sales will happen only very rarely these days. If ever again – and that’s fine with me. Why should I worry?” So there’s no sense from even the smallest part of the business side of your brain that commercial sales are important to you anymore? “You have to remember that REM was really lucky – we were around at a time when we could have hits, and so you could sell 50 million records over a number of years. For me, that’s the best of both worlds – knowing that, and then getting royalty payments during a time now when we don’t sell 50 million albums.”

Buck is on the way to making his second solo album, and will, he says, apply the same strategies he used for the first one. “I’ll pay everyone really well, it’ll sell about 6,000 copies, it’ll be really fun to do, and I’ll be doing exactly what I want to do. It’s the same thing with the Tired Pony albums; no one is saying to us they want a hit single. It’s more what do we want to accomplish? Pride in our work, that’s what.”