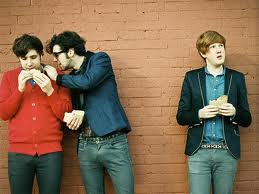 It’s happened before and it will, no doubt, happen again: take a bunch of teenagers from a small town grammar school, put musical instruments into their hands, dress them in the la-di-da clothes of the day and wait until they sell over one million copies of their debut album.

“You occasionally get the feeling that someone has messed up in admin,” says Two Door Cinema Club’s bassist Kevin Baird on the band’s – and there is no other way to describe it – stratospheric success over the past two years, “and that someone hasn’t checked our backstage passes. The way we look at it is that we really shouldn’t be here. When we started crawling up the ladder in profile, especially at festivals, we felt that someone was going to come along and tell us to leave the premises.”

Back in 2008/2009, a year and bit after they formed in Bangor, Co Down, they recall living on a diet of supermarket value meals and bottles of water that they’d, er, appropriated from the venues they played to double-digit amounts of people. Now? Well, now Two Door Cinema Club headline festivals in Europe and beyond, and sell out 3,000-capacity shows. Now, they travel in tour buses that have wine racks full of Chardonnay-this, Chateau-that and Champagne-whatever. Now, they loan out their lead singer to global events such as the Olympics opening ceremony. Now they are so successful that their second album (Beacon) leaks online a full month before its official release. Oh, yes, cor blimey, mate – things have indeed changed.

What should have happened to TDCC, of course, is what occurs to 90 per cent of similar status bands. “In theory, obviously, what should have taken place,” says TDCC’s guitarist Sam Halliday, “was that we should have stopped touring a year before we did, which was a year before it all started to get crazy. What should have happened is that we shouldn’t have been as lucky, if that’s the right word. Mainstream radio didn’t play our songs, mainstream magazines didn’t cover us, but we just kept going, and usually for bands like us, where we’re from, we don’t get that lucky break. But we kept going, people got on board, we toured for another year, and that’s when it started to kick in.”

Even for an independently-minded band such as TDCC, the perceived natural progression – signing a record deal, recording an album, releasing the album, touring the album, going back into the studio and recording the second album, all the while playing compact venues – didn’t win them any tried and trusted favours. In short, they slogged away for a while. It wasn’t working. They slogged away for a bit more. It still wasn’t working. And then they set their sights on America.

“It was about creating our own design,” reveals Alex Trimble, the band’s lead singer and one of the is-that-really-who-I-think-it-is surprise performers at the aforementioned Olympics, “and not following that typical formula, which is undoubtedly the reason why it worked. There is a formula for bands and major acts on big labels – what happens is strategized. For independent bands, even, there is a set formula that most will follow. For us, though, we thought why should we do that. Clearly, the so-called strategies didn’t do us a lot of favours, so we decided to do something different.”

Something different definitely worked. Perhaps the mixture of youth, ambition and freedom from certain responsibilities assisted their passage to continue touring and playing shows virtually non-stop, and seeing such effort set into momentum the swing from playing little dive bars with upto 50 people in them to venues where they now play to thousands.

“We were getting messages from all around the world on Twitter, email, Facebook,” says Trimble, “and we thought that if the demand was there then we should give the fans what they want. When we started we were in the game primarily for ourselves, but in order to keep it for ourselves, we knew we had to give a lot to other people, because these are the people who allow us to do what we want to do.”

Is that a big sacrifice? Not at all, explains a selfless Trimble, an attitude that once again reflects their million-selling, ingenue status. “You can put it in ways that makes it sound like a sacrifice but the feeling you get going to these places and seeing people’s reactions – knowing that you’re giving other people a good time – makes us happy in a totally different way.”

They cherish their songs, is the implicit admission; they create them in a closed room with no one else around, with no one else in mind, and that is the only part that needs to be for them. “Yes, we’re artists, creative types; that’s what we love to do and that’s why we’re in this,” elaborates Trimble, “but we’re also entertainers, and we’re there to give fans an experience, an emotional uplift – joy, if you like. And that also makes us very happy.”

There is push and pull to all of this, of course, as Halliday fleshes out. “It’s been very difficult, mentally, to come around to – making the transition from no one being really aware of you to having your photo taken with a fan. For them it makes their night. For us, it’s tricky to understand why someone would want it. It’s not that you’re rude, or want to be, but it’s definitely a struggle. We’re getting better at it now, obviously…”

“To us it still seems an odd concept, but saying it’s a pain in the arse is ungrateful,” reflects Trimble. “It’s a few seconds of your time that can double or triple someone’s pleasant memories of you, and if you take that ten seconds or so there’s going to be an extra bond, and that works in everyone’s favour.”

And so the 2DCC mantra continues: work it, baby. “You assess it on what you yourself would do,” asserts Halliday. “I mean, I wouldn’t necessarily want a photo with me! But we forget that for some people it’s very important. It’s difficult to understand what you are, or might be, to others. In your head, you’re just you. In their head, you’re possibly something of an idol. Or something like that.”

Conflicts, challenges, compromises, changes in creative tack and some stuff you’d be better off not to analyse too deeply: they’re all in the line of duty when it comes to raising the profile from zero to hero. What Trimble seems over zealous to confirm, however (of the three 2DCC blokes he seems the most tuned in to overt commercial possibilities – although this could be a post-Olympics hangover), is the benefit to the band’s momentum in being signed to low-key indie labels in Europe (Paris-based Kitsune) and America (New York’s Glassnote). That said, there’s an unspoken irony to the fact that we’re conducting this chat in the Dublin offices of Universal Records, which with 2DCC have aligned themselves for the distribution of Beacon.

Being in bed with independent labels has benefited the band, says Trimble, in more ways than he could possibly ever explain. “It might sound a bit twee,’ he says (and it most certainly does), “but we’re friends with everyone at each label. They’re passionate about the band, and they want to make it work for us. They know we know how to do it, how to make it work. And so they just let us do what we do by facilitating us rather than taking control.”

As a result, 2DCC decide when and where they tour, which songs from the albums should be singles, overseeing the art work, and so on. Yet as every commercially successful band knows, there can come a point in your career where major labels can be more beneficial. Depending on your stance, here’s where it gets either interesting or clichéd. “We’ve always had an attitude of saying never say never,” says Trimble, “but where we are now, the status of  independence is perfect for us. We’re proving what we can do on our own. We think that when you’re starting off the best thing is to prove you can do it yourselves.”

And so they firmly, unquestionably have. The snap-happy Tourist History, however, seems quite a remove from the rather more reflective, shiny surfaces of Beacon (which, as if to consolidate its focus, is produced by Jacknife Lee, the Dublin man who has worked his charm on the likes of Snow Patrol, U2, REM and SP/REM splinter act, Tired Pony). In other words, it’s definitely a progression, but to what end remains to be seen. “You can’t really talk up the merits of one over the other,” advises Kevin Baird warily. “The way we like to explain it is that Tourist History summed up who and what we were when we made it in our teens. Beacon sums up where we are in our early 20s.”