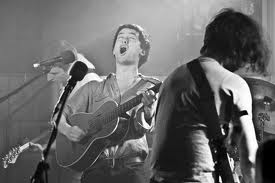 Of any Irish band of the past five years you can think of it is only Villagers that have managed to tick all the boxes. Slinky and sinuous? That’d be bass player Danny Snow and the way his body movement oozes Sylverin-like signatures. Songs so smart and surreal they stop you in your tracks? That’d be I Saw the Dead, That Day, The Meaning of the Ritual, Twenty-seven Strangers (from 2010 debut album Becoming a Jackal) and Earthly Pleasures, Judgement Call, Nothing Arrived, The Bell, and In a New Found Land You Are Free (from new album, {Awayland}). Swirling and visceral? That’d be guitarist Tommy McLaughlin and the way he entraps you in a sonic eye of the storm. And then there’s the singer. The songwriter. The central focus. The boy with the thorn in his side. Conor O’Brien.

O’Brien is in Dingle’s Benners Hotel; we are talking in a library alcove, a place where we can hear ourselves above the chatter and clatter. O’Brien is nursing a glass of red wine, and is tucked into a cosy chair, his youthful, relaxed demeanour enveloped by cracked red leather, heavy curtains and old books.

“With the first album I made a bit of a fuss about the way that songs change from studio to gigs, almost wanting us to be a jazz band. We’re not at all like that, but the songs morph a bit, texturally, and I suppose the difference with the second album is that they morphed in the process of rehearsing them before we even recorded the album. For Becoming a Jackal I recorded all the instruments myself, and I almost treated it like a hangover from college, where I had an academic enthusiasm about it. I mean, for that album I had the theme, the title and the artwork before I’d even written the songs; I was fitting the songs to a project, basically. Whereas with {Awayland} I was completely lost; I had no plans, no ideas. I’d a few songs I’d written on tour, so they were the kind of guiding lights, I guess.”

From Malahide, north county Dublin, O’Brien picked up the guitar at the age of 12 – a gift, of sorts, from his older brother – and doodled away in a household steeped in creativity (his painter father clearly inspired his interest in art and drawing, an example of which is Becoming a Jackal’s front cover). Aligned to this are his creative thought processes, which far exceed most of, if not all, of his peers. His CV, also, belies what some might term his preternatural young looks (we’re not saying he’s a vampire, but, you know, it has crossed our mind now and again).

O’Brien initially gained something of a public profile with his first well-known band, The Immediate, which in 2006 released their only album, In Towers and Clouds. Splitting up shortly after the album’s release (due to, ahem, “existential differences”), O’Brien spent some time in Cathy Davey’s band, but quickly forged out on his own. He chose the name of Villagers, he says, because of its non-specific, anonymous tone, rooted neither to style nor genre. In 2009, Villagers’ debut EP, Hollow Kind, was released on the Irish label, Any Other City, but it wasn’t long before the band signed to Domino. Shortly after came the debut album, critical praise, commercial rewards, Mercury Prize, Choice Music Prize and Q magazine nominations, and the winning of a prestigious Ivor Novello Award (for the song Becoming a Jackal – Best Song Musically and Lyrically).

So everything was rosy in the village hall? Well, no it wasn’t. All of the aforementioned plaudits, gongs and glitz were – very shortly following the debut album’s release – overshadowed by the death of O’Brien’s sister. “That was…” O’Brien takes a sip from his glass of wine, and collects his thoughts for a moment. “Well, basically, I had a mission from then on that everything I did or was going to write was with her in mind. And that changes you to a degree. It was right at the beginning of the process of touring, and so it was bittersweet. From the outside, of course, the aspects of touring look very exciting, but mentally I was mixed up. So a lot of the words for the new songs came out of the thoughts and feelings of what I was having about that. I became more interested in reading more about certain areas; Kurt Vonnegurt is a good example of someone who is into tragic-comedy, and I got more into the idea of using music and words to uplift the listener.”

On the album Becoming a Jackal, O’Brien asserts, he was almost romanticizing sadness – “probably because I’d never experienced it, but once you do you realize how unromantic and completely, desperately horrible it is, and that you are lucky to make music. I felt like I was going through a transformation in my brain over the process of that phase of touring and I wanted to express that in the new songs. That’s why there’s more rhythm and more life in {Awayland}. The record still deals with heavy stuff, but the songs carry that a bit more.”

He sits up suddenly from the cosy chair, making a curtain swish behind him. An important point is about to be made. “I’m writing about the absolute void you can feel in life, which everybody feels at some stage, but using that as something to make us feel like we’re in it together. It’s a secular spirituality vibe. Ha! But it gives you focus, for sure.”

So the initial impetus of the songs was therapeutic, but O’Brien maintains, correctly, that if that’s all you’re doing, then what’s the point? The fun part for him, he admits, is dragging the songs across a bridge from his own therapy to what someone else is going to get from the songs. For him, that’s the craft, the one thing that he completely obsesses over, and loves doing. “It’s all about words – the economy of words. What are the words that I can put in or take out? And that take you to a place where, when you hear it – no matter what situation they’re in – you will get it. To me, that’s the challenge. For {Awayland} I was trying to focus on the rhythmical aspect of the words, and the connection they have with the music. So maybe they’re less self-conscious, perhaps they flow a bit more. That said, in many ways I was focusing on the music more, learning new things, so in some way the words were almost a by-product of that.”

Does he learn much about himself through the writing of a song? “That’s the pleasure of it, isn’t it? If you don’t feel you’ve made a journey through the writing of a song, then they’re the ones, maybe, that you keep to yourself and don’t show to anyone. There’s no reason for them, is there? It’s probably the reason why I don’t write very many songs; I spend so long on individual ones that I just flesh out until they finally arrive.” For O’Brien and his intuitive band (they are one and the same, particularly on stage, where they almost mutate into one indivisible entity that is as exciting and spooky an experience as it sounds) it is all about using the imagination skillfully enough to make whatever he’s working on amusing, interesting, intriguing.

“I try to write with no agenda,” he maintains. “The main feeling for {Awayland}, for me, at least, is that I liked the sense of tickling certain topics, and definitely being less morose. I wanted to write a tragi-comedy across the span of the songs. In my head I had tragi-comedy, wonderment and birth. Those three things were the driving forces…” O’Brien reaches for his wine glass. Death is there, too, though, isn’t it? His hand stops.“Yes, of course, but I was being cheeky. You know, fuck you, death, I’m going to write about birth!”

(This first appeared in The Ticket/Irish Times, January 4th, 2013.)