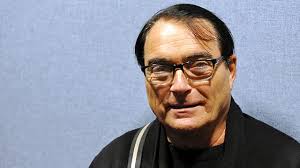 He used to be a robot, but he’s all right now. Wolfgang Flur is one of the most famous musicians in the history of electronica, and as he runs through a soundcheck in the Arctic environment of an underground car park, it’s obvious that this most dapper gentleman wears the fame, renown, recognition and kudos very well.

As the drummer of Kraftwerk from 1974-87 – the period of time when the Dusseldorf quartet released pioneering, iconic electronic music albums such as Autobahn, Radio-Activity, Trans-Europe Express, The Man Machine, and Computer World – Flur played a central role in the development of a musical language that has influenced and informed much of what passes for pop music these years. Far from electronic music he was raised, however.

“My first ambition, musically, was to copy The Beatles,” accedes Flur, now seated upstairs on a couch in the car showroom, his every movement and utterance captured on a video camera that his Turkish wife is pointing in his direction. “What else could I do? We had no music of our own, and in the ‘60s there was no chance to play at any venues other than school halls, garden fairs, gymnasiums or private parties. And when we gigged we had to play what was in the Top 10.”

Flur’s first pop band, The Beethovens, was founded in 1966. He recalls they would meet every Saturday afternoon, listen to Radio Luxembourg, and decide what songs they would cover. “We heard many pop bands on that radio station – The Beatles, Tony Sheridan, Cliff Richard, Lovin’ Spoonful, Herman’s Hermits, loads of other acts. This music was so different to our Schlager music – a form of easy listening music – which was all we had. It was music my generation hated, the music of our parents; they danced to it but we just couldn’t get into it. I was always more interested in pop music, and I still feel like that.”

The first blip on the radar screen that flagged something different was in a new band, Spirits of Sound, which in the late ‘60s Flur co-founded with guitarist Michael Rother (who ended up forming the spine of classic motoric/krautrock band, Neu!). “We started to write original music, but unfortunately we never recorded it – we had no money. We played live, and the music was very different from The Beatles – something akin to King Crimson, psychedelic.”

A couple of years passed; Rother was cajoled into joining another group, and Flur started a career as an architect. “I felt that for me music was over. Architecture wasn’t the worst choice. I was two years working at a studio, drawing ground plans. Things were going very well, and I suppose I could have made a future out of that. But as it turned out I had a very different future ahead of me.”

1972 arrived. A knock on his door. Flur opened it to see Florian Schneider and Ralf Hutter standing there. “They said they wanted me for their band. They were laughing as they asked, but I was not so amused, and so I refused to rehearse with them; in fact, I refused to have anything to do with them. But they came back a few times, refused to take no for an answer, and they explained why – they had always too many problem with drummers.

“I asked them why, and they said that the drummers just drummed too much. Theirs was a minimal group, they said, but I had no idea what that meant. We play experimental music, they said; and then I remembered I had seen them playing in a gymnasium. To me, however, the music was like airplanes flying over – too much noise and repetition. I told them I was a pop musician, but they were very insistent, so I was interested if just a bit nervous. But some day after I went to their rehearsal studio, and for the first time in my life I heard the sound of synthesizers. I was amazed, more than amazed. Blown away, to be honest.”

The rest is history, and an inventive, innovative history at that. Flur’s solo work through the ‘90s to now has been sporadic; collaborations (Pizzicato Five, Mouse on Mars), autobiography (2000’s I was a Robot, which was the subject of a lawsuit filed by Schneider and Hutter), and more recently, as Musik Soldat, a fancy soubriquet for what you and I might term DJ, but which Flur seriously describes as “music presenter.”

Kraftwerk may be in the past for Flur, but he fully realises that what he has done since he left the group (in 1987) has been predicated on his crucial involvement during its inarguable golden period. He shrugs his shoulders, implying more pragmatism than resignation. His wife continues to film his every move. “When the door is opened for me to do things I have the Kraftwerk brand, and there’s good in that. That brand can also be something like a stigma, however, which obviously isn’t good.

“But, look, we are sitting here because I was once a member of the group, and if that was not in my biography then we wouldn’t be here. People come to see me because they’re curious to see if I play Kraftwerk music – but I don’t.”

(This article was first published in The Irish Times, July 2015.)