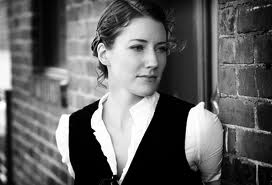 Kathleen Edwards – we have waited a long time for your new album, Voyageur. Is the long wait as frustrating for you as it is for us?

“Well, it feels a lot better that it’s out in the world, instead of having finished it and then going for a long period of time without anyone really hearing it. I was in Dublin last fall opening for Bon Iver, and while the album was finished it was almost like having my hands tied in that I was more than ready to be playing the news songs, but because the album wasn’t actually out I was almost prohibited. Years of my life have been wrapped up in Voyageur – creatively, I felt like I’d crossed over into new territory for myself that was really fun, rewarding and challenging. For the record to sit on a shelf for a while kind of took the wind out of my sales. It was as if all that hard work hadn’t really added up to anything.”

Was it on the shelf die to the usual record company issues?
“Yes, and I understand the reasons why the people that I’m working with required time. There are a lot of little silly details about what is and isn’t a good time to release music. It’s validating that it’s out now, of course, and the truth is that I feel like I’m being heard for the first time. The record isn’t really in the same genre of music that I existed in before, so I feel hopeful in that the next few years are going to be interesting. I don’t feel like I’m going to be tied to a certain type of music anymore, that’s for sure.”

And your songs are still as pure and as raw, aren’t they? You don’t pull any punches on Voyageur, do you? Not that you ever have…
“It still sounds like me, yes, and as much as I tried to edit myself more carefully or to have had a different end result, I still don’t think the way that I write songs is any different. I still write quite personally and intuitively, so the songs are still my stories. I guess I use my songs to be brutally honest in the way I’m not necessarily in real life. This particular record is definitely raw in the sense that I’ve gone through a lot of things in my life in the past few years, and like anybody sometimes you’re not going to walk down the street and talk openly to strangers about painful, embarrassing or difficult things. This record is all of those, and in retrospect I realize I did put out a lot of my own information out there. And it’s not like it’s just my details – it’s my ex-husband, who is also involved in this story. It’s almost like it feels unfair that I’ve told everybody things that maybe I didn’t want to be out there. Of course, I’m probably not the only person who goes through this stuff, but I’m the only one telling people about it, and so I feel the opportunity to be judged is far greater, and maybe that is something I wish I had not done.”

Do you really think some people judge you for what you write about in your songs?
“Ha! Oh, I think that’s probably just my own insecurity coming out when I say stuff like that. If I could say one thing – every record has a story and sometimes you feel like your life or your artistic work, cumulatively, is larger than the person you broke up with – or even the story itself. Sometimes there is more to the picture than the boy that was in it, you know? Some interviews to date have focused on the album being a divorce or break-up album or a new love album, but it’s just a snapshot of life. Maybe the album is relationship heavy, but I have far more interesting things happening in my heart and in my head than just who I’m currently in love with. That stuff is important if one-dimensional.”

Your relationship with Justin Vernon/Bon Iver – has that added to audience interest about you, your music and your life?
“I think we both have the benefit of being a certain type of person that is not really interested in engaging with that kind of feedback, or, indeed, perpetuating any of it. I’m sure it’s inevitable that people will have opinions about him, or me, despite the fact that we’ve never met the person making the comment. I’m not worried about the chatter, though; to quote a stupid movie, they’re not in the circle of trust. Anyone who is outside of that circle doesn’t get to have a say in what my relationship is with my partner.”