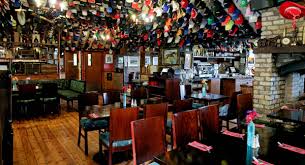 The first things you notice are the baseball caps. They hang down from the ceiling – over 3,000 of them – in neat rows, looking for all the world like multi-coloured bats. Hats from the locality, hats from around Ireland, hats from across the globe. Each hat has been donated by customers, who have heard of this strange but compelling gathering – a gathering of hats that aims to, one day, win a Guinness World Record gong for the most hats in a public place.

But enough about hats. If you’re not from Louth, Meath or North County Dublin, it’s unlikely that the Snail Box will mean anything to you. It is, after all, just another roadside bar/restaurant off a main road (in this instance between Ashbourne and Slane), isn’t it? And, as you know, roadside bar/restaurant places don’t have much going for them, do they?

Of course, you could be right there some of the time, but if you think this particular establishment should be painted with the same brush, then you are wrong, wrong, wrong. I say this with conviction, because in the past four years, we have been to the Snail Box more times than any other restaurant, and every time we leave, we look at each other for a comment and can’t find a damn thing to complain about.

You’ve been to these restaurants yourself – they’re the kind that the food critics, who you read each Saturday and Sunday, have never written about. Because of this, you are delighted that the Snail Box isn’t ever going to become a hip place to eat, yet disappointed that more people don’t know about it.

Not that the owners seem to mind. Having won the Best Welcome & Customer Service Award a few years ago, the Snail Box has built its reputation not just through its customer service strategy (which, frankly, comes across as less strategy and more natural friendliness) but rather through a consistency of food produce that is second to none. It’s fair to say this restaurant isn’t after the haute cuisine market; is isn’t after the type of clientele that knows their Henri Jayer Vosne-Romanée from their Domaine de la Romanée-Conti Montrachet Grand Cru. And neither is it chasing the high-end customer with expense accounts for Michelin star restaurants such as Restaurant Patrick Guilbaud, l’Ecrivain or Chapter One. They are, we all know, a completely different type of restaurant experience.

What the Snail Box has, though, is what many other restaurants have not: a special kind of atmosphere, a familiarity and a warmth that is easy to manufacture but impossible to fake. The truth is, there’s nothing fancy about this place – you can roll up in your best threads or in the jumper and jeans you’ve worn all day, and still feel good about your position at the dinner table. No one is going to look at you because they’re too busy eating their food. No one is going to comment about your lack of a smart jacket because they’re too busy wallowing in the buzz of contentment.

The food? Contrary to what you may have presumed by the preceding few paragraphs, the food isn’t secondary. For the record, the food is superb. We shared a starter of Thai Beef salad, which features layers of tender meat on a crisp salad mix. For mains, we went for fillet steak (medium-rare) and prawn stir-fry. One of the proper foodie reasons we’ve been here so often is because of the mouth-watering steaks, which are always cooked exactly the way we ask for, and which are garlanded with a skewer of sautéed onions and mushrooms, as well as a side order of fries or salad. The stir-fry, too, is a house specialty, served sizzling and smoking hot and accompanied by rice or noodles. Desserts are usually a no-no, due to the amount of food served for the main course, but tonight we shared a Snailbox Fruit Ice Cream, which is akin to a Knickerbocker Glory with fragrant, fruity knobs on. To wash it down, we plumped for a Chilean Merlot (San Elias, 2012), which was – cease and desist, wine snobs! – just right.

The end result? A car journey home with no complaints. Again.