Whether paying customers know it or not, some restaurants have a lot of memories attached to them. Your reviewer, for example, recalls spending more time in the Winding Stair second-hand bookshop/coffee bar throughout the 80s and 90s than was good for the bank balance. Your reviewer, also, is very much aware that part of the reason why he wasted so much time and spent so much money on dusty hardbacks back then was that the office of (the then quality) In Dublin magazine was in the basement, and if hanging around the bookshop meant that you might accidentally-on-purpose bump into the editor for a fancy-meeting-you-here chat, then so be it.

Even back then, the Winding Stair was the kind of place to take comfort in. You could nurse a bog-standard coffee (no one had heard about skinny cappuccinos back then), tuck into a truck-size sandwich and sit by a window that looked over the Ha’penny Bridge.  Your mission in the pre-Internet age? How about reading and watching the world go by without being troubled by texts and tweets for an hour or so?

Some things change, some stay the same; the Winding Stair closed down in 2005, but less than a year later it was exhumed, dusted off and realigned as a rather choice restaurant. That it has been a regular on Dublin’s dining map ever since isn’t bad going – like all of us with varying shades of financial bruising, it has come through recessionary times still standing. It is now firmly established. It reassuringly steers clear of attention-grabbing bells, whistles and foghorns. The winding stairs leading up to the first floor restaurant still emit those giveaway creaks, but that’s the only sign of old age for this particular hardy perennial.

We needed to be somewhere by 8pm, so we booked a table for 5.30pm – too early, some might say, for dinner, but we knew we’d have time to mull over important things such as food choices and the Garth Brooks problem. And besides, we felt no pressure from any of the attentive, busy staff, no beady-eye glances from the on-duty manager. 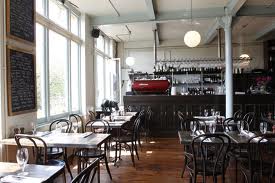 The essential premise, menu-wise, is comfort food – assiduously sourced in Ireland – of the kind that your mother could drum up at a moment’s notice if only she knew how. We both opted for the pre-theatre menu, which had almost too much to choose from. We oohed and aahed over starters: Cavan-based Corleggy’s goats curd, heirloom tomatoes, pencil asparagus, polenta croutons and herb dressing; smoked ham-hock, purple potato, Black Pig black pudding with broad bean, chicory and baby gem salad, and whiskey dressing. Each of these exuded impertinent health and freshness, with complementary, crunchy textures that paved the way for our main courses.

Curiously, we both opted for more pork – Guinness braised short ribs, roast rainbow carrots and tarragon with horseradish mash, and an 8oz Kassler (salt-cured pork loin smoked with beachwood), pickled fennel wedges, garlic and lemon runner beans, mash with cider gravy. You only had to look at the ribs for the meat to slide off the bone, while the Kassler was that common sense blend of density and tenderness. The surprise of the plate, though, was the pickled fennel, which on first taste was akin to a packet of Starbursts (known back in the day as Opel Fruits – made to make your mouth water, if you recall) exploding in your mouth. We then shared a dessert – chocolate, white chocolate and cherry brownie with vanilla ice cream – that rested just nicely on the moral side of indulgent.

Alcohol was selected for the humid evening that was in it as well as for the view of the Ha’penny Bridge: a glass of supple house red (Tempranillo, La Mancha, Campos de Viento) and a 50cl bottle of Five Lamps lager, a snappy craft product from Liberties-based 5 Lamps Dublin Brewery.

It was all very impressive: a sizzling open kitchen, a bustling space well presided over, a dignified and honest-to-goodness approach to décor and practical restaurant aesthetics (clipboard menus, stripped wood, original girders that referenced an industrial past, wall-hung blackboards chalked, most sensibly, with by-the-glass wines, Raffles-type ceiling fans), a relaxing view of the Liffey, and the knowledge that locally sourced ingredients were prepared and cooked by people who left their egos at home. Oh – almost forgot! A few original shelves are now stacked with wine bottles instead of books. Somehow, you sense the former typesetting, typewriting, telephoning inhabitants of the In Dublin office would approve.

THE TAB: Pre-theatre dinner for two (one three-course; one two-course) with wine and craft lager, came to €66.85, tip extra.