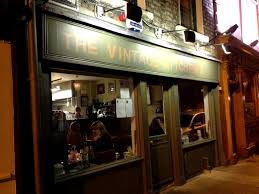 We have been to smaller restaurants but usually they’ve been located in much larger cities than Dublin; hideaways in side streets and alleyways in Paris and New York spring to mind, but we have yet to visit one as downright charming and quirky as Vintage Kitchen (which can seat, at an all-too obvious squeeze, 30 people who will, by the end of their meal, have few secrets from each other).

Describing itself a “pop-down-to” restaurant (as opposed to what other type we’re unsure) might be something of a misnomer, but we reckon it’s because of its homely, if ever so slightly odd, nature. Certainly, for such a small restaurant it packs a great punch in the areas of ambience and food – and the fact that it chooses to justifiably boast about its Bring-Your-Own-Wine policy ensures that it clocks up even more brownie points. An added bonus is the non-charging of corkage – provided you order from the set menu (or two courses from the dinner menu).

Small is good, then, but such size brings its own unique issues (which are not necessarily problems), the first of which is booking. Not for Vintage Kitchen is the kind of person who books a table only for them never to turn up at the appointed time – this is especially a thorn in the side if the booking is for a table of six or more. You are, therefore, called on your contact phone number several hours before the booking time and asked to once again confirm your arrival. This seems eminently right, proper, sensible and, indeed, mannerly – as the restaurant says on its website, “we are a small restaurant, and cannot afford to have empty tables because people do not turn up.”

The second issue (which may be a problem) is that if you are seated opposite the kitchen (and at least three tables will be), then there could be food odour wafting its way from the cooking control centre onto your clothes. It’s a minor detail as far as this reviewer is concerned, but one that could irritate some. The third issue is a definite plus point – vintage is as vintage does, and one of the primary quirks here is that as you sip your very reasonably priced wine and wait for your food to arrive you can look around the walls and see all shapes and sizes of arts and crafts. On the night we are there, we notice the four Beatles made out of what looks suspiciously like corrugated pea/beans cans. A sidebar to this odds-and-ends approach is a crate of vinyl albums that you can peruse, choose and play on the premise’s very album record player. So far, so kitsch.

Of course, a restaurant can have as many little oddities as it likes, but if the food doesn’t cut it then what’s the point? We select from the two-course dinner menu (€25); for starters we have the Spiced Seafood Chowder and Risotto of pancheta (with pea, chili and parsley). The portion of the chowder is immense, and with the accompanying bread and fennel butter (which came, very cutely, in a tiny stainless steel pail) it would easily sort out any Hungry Horace pangs. The risotto, meanwhile, is viscous, compact and very tasty.

Mains of Slaney River Slow Roasted Lamb Shank (with treacle gravy, roasted sweet potato mash, roasted potato, twice cooked carrot) and Pan fried Kilmore Quay hake (with cajun boulibasse, Roaring Bay mussels, lump fish caviar, and roasted parsnip) are impressive, but the flaw is the size of portions – after the bountiful starters, we struggle (and fail) to finish what is in front of us. Dessert, then, isn’t an option, but we’ll be back for more of this someday, somehow. Speaking of which, if you’re keen to give Vintage Kitchen a go (and, yes, you really should), then be advised to book well in advance for your ideal night. The first time I tried to book a table for two (for a Saturday evening) I was informed with a hearty (and definitely not haughty) laugh that all Saturday nights were booked up months in advance.

This is surely great news for the owner, the most amiable, engaging Sean Drugan (who once toiled at Portobello’s much vaunted Seagrass Restaurant, from where he also utilised, to good advantage, a BYOW strategy). It is also good news for the upkeep of quality, which is something Vintage Kitchen – despite a mild kookiness, and, yes, there’s a pun in there somewhere – has in buckets and spades.

(This review first appeared in The Irish Examiner, November 22, 2014.)