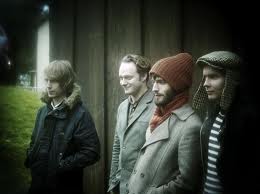 So much has been written and said about your music, but what music do you like to listen to that isn’t Sigur Ros?

“I like to listen to dreamy music; it clears my head listening to ambient, choral music… Everything is interesting, though. I listen to contemporary classical music, too, and electronic music. I put on Iron Maiden in the morning and Leonard Cohen in the evening. I listen to everything in-between! People such as Britney and J-Lo? Modern pop music is interesting to listen to, but I couldn’t handle it all the time.”

What is the signature, singular Sigur Ros modus operandi when settling down to make music?
“Your mind has to be open when you’re making music. Your ears have to be open, too, in order to take in sounds that are diverting – I find that even the squeaks of the buses driving by can be utilized if you find the right place for them.”

Where does your music stem from?
“Some people say it comes from Icelandic folk music, but not intentionally. Our folk music is a bit different – in fact it’s very strange. There are some similarities. We did a song for a movie recently and one of them was an old traditional lullaby – or at least that’s what we thought, but we were told it was an old Irish song! As for the so-called dreamy melodies, well, they just very naturally appear.”

How does the band react to the amount of gushing media coverage you receive every time you release a new record?
“Our success has been pretty much word of mouth, which is really good, in that it has kept us on the ground. We haven’t been pushing big commercial promotion, to be honest. Sure, we’ve done it a bit, through interviews, but living in Iceland has helped us keep our feet on the ground. I don’t think we are in the pop star frame just yet, and to be truthful about it I don’t we ever will be. I’m sure we’ll stay grounded. Part of the reason is that we stay in Iceland. It’s important for all the members of the band to do that.”

Your music has a profound effect on people, doesn’t it?
“There are lots of different ways that our music effects people. That is what I think is so great about it. People are getting their own ideas from the music, and it varies so much. We’re always getting comments from people about how differently they feel emotionally. When I’m on stage, the feeling also varies. It depends on how I’m feeling, how I woke up. But it’s very personal, so some people can’t really describe it. So many emotions come out and are expressed.”

What’s it like on stage playing such music? Some of it is improvised, so do you just go with the flow?
“You’re just playing and not thinking, yet you do everything perfectly. You’re flying! That happens sometimes; you become wrapped up totally in your own world. One of our members used to be a kindergarten teacher for a few years, and he would occasionally play some of our music to the children. They’d tell him it’s dreamy music. ‘An adventure’ – that’s what they described it as. I agree…”

(This first appeared in The Irish Times, August 2012)