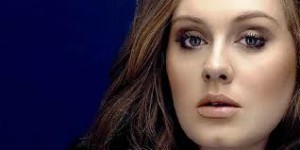 We are twenty minutes into a right old natter, and Tottenham’s Aretha Franklin is wrinkling up her nose. “I’m so sorry, but the dog has farted.” Louis Armstrong, Adele Adkins’ petite, tubular dachshund (aka Sausage), is soiling the atmosphere of XL Records’ headquarters in London’s Ladbroke Grove, but the apology is shot through with a bit of a cackle-laugh and a Carry-On-Regardless demeanour. Spend any length of time in the company of Adele and you’ll come to learn pretty damn quick that the classiest singer of her generation has little time for airs and graces.

Truth is, Adele is as rooted as they come, a 20-something woman with strong Irish connections and what appears to be a direct line to a Heaven-sent range of musical influences that themselves are underpinned by straight-as-they-come emotions. In 2008, Adele’s debut album, 19, ushered in a singer and a voice that knocked her contemporaries and main competitors (Duffy, Lily Allen, Kate Nash) out cold. Now, with Duffy and Nash clearly showing their shortcomings on follow-up albums, and with Allen (now known as Lily Rose Cooper) currently hiding in the long grass, Adele’s new album, 21, is geared up to be this year’s model. But 21 is more than just a Mexican standoff with her music chart mates. It’s unlikely that an album released this year will match its often profound depths and peaks of euphoria, all of which are enveloped by a stirring mixture of stripped-down, subtle soul, blues, country, gospel and pop.

“It was always music for me, as I’m not, and never have been, very academic.” Dressed top to toe in black, with a beehive hair-do out to there and curved eyelashes out to here, the dog on her lap, Adele is a charmer. She falls over herself, almost, to make me a cup of tea before she gets down to chatting. “I get bored very quickly – I have the attention span of a fly. So music, yes, but it was never something I purposely pursued.

“In other words, I never had the aim of being a professional recording artist. Like, my friends at the time, we all had a dream and none of theirs was coming true, so I reckoned why the hell would mine? The only reason I ended up studying music at Croydon’s Brit School was that I knew I was going to fail all my GCSEs, so I panicked. Whereas I knew I’d pass all the music and performance stuff, and because of that I thought I’d get work somewhere in the music industry.”

Adele had writing songs since she was 16, and whilst at Croydon had set up her MySpace page where songs such as Hometown Glory were being listened to. With her Brit School qualification in her bag and a job at Gap keeping her in pocket money, Adele eventually rolled up at the offices of XL (home to The Prodigy, Badly Drawn Boy, M.I.A., White Stripes, Sigur Ros, Peaches, Vampire Weekend, Dizzee Rascal, The xx), where she had hoped she’d land a position as a talent scout.

“They offered me a record deal instead – but getting signed was never an ambition. I knew I’d be involved in music somewhere but I never – ever – thought I’d be a recording artist. It just seemed pretty unlikely. I clearly remember the day I came to them, as it’s one of the pivotal days of my life. They asked me if I had a manager, and I said, well, I have one at Gap!”

And so Adele’s story began. Debut album 19 followed, its success quickly setting her up as an authentic voice of the emotionally bruised teenager. But how does anyone follow up such a stirring debut? The answer, in Adele’s case, is with relative ease, and with, apparently, none of the shortcomings that usually undermine highly anticipated second albums: lack of material, insight, guidance, and a surfeit of ego.

“When I was 16,” recalls Adele, “I wrote my first song, Hometown Glory, which is the song I got signed on the back of. Then, of course, the rest of the songs for 19 came after that. But I remember when I was promoting 19, I started to think what the fuck am I going to write about for the next album? It’s not life, is it, when you’re spending your time in hotel rooms and airport lounges? What if I turn into one of those people I hate? What if I had ended up writing a really egotistical record, about being lonely while you’re raiding the mini-bar? People aren’t sympathetic to that, and I’m not, either.”

Life, as is so often the case, had other plans for Adele – she hooked up with what she openly terms as “the complete love of my life, and the most amazing immense relationship so far in my life. It didn’t last, unfortunately – it ended because it stopped being fun, and thankfully the ending wasn’t bitter – but the whole thing changed me. It made me really passionate about love, life, myself, pretty much everything. I had so much to write about – it was like a tap that was difficult to turn off. The relationship just consumed me, which is where the songs came from.”

As on 19, the songs on 21 ring true. With such a resonant source from which to mine authentic heartbreak, Adele has achieved that rare thing: you believe utterly in what you’re listening to. “It’s important to me that people believe the songs are honest because they totally are. I would hate if someone thought that, yeah, whatever, she’s made them all up. My primary inspirations for this record were the likes of Etta James, Carole King, Roberta Flack – people behind completely convincing love songs that I fully believed when I first heard them. I remember hearing the Miseducation of Lauryn Hill when I was 10. I was waiting for the bus outside Woolworths in Brixton, and my dad bought that record for my mum and a video of Flubber – fucking Flubber! – for me.

“But I nicked the album and listened to it every day after school in my bedroom, sitting on my little sofabed, reading the lyrics, and hoping to God that one day I’d be a singer. So that conviction, the breathtaking delivery of songs – the believability – is almost part of my DNA. I’m not happy unless I feel I’m offering that – even if it’s just a little bit.”

A little bit? Adele is underselling herself here, as 21 is the resultant work of someone whose heart was shattered but whose dreams have come true, a songwriter adept at mining gold from despair. It must make certain people livid to realise that she had no career strategy whatsoever. “Maybe it was just having a kind of self-belief,” she reflects, “and also having to bear the brunt of attitudes from authority figures such as teachers who were saying that, for me, success was unrealistic. So I chose to survive rather than live in a fantasy world. I suppose I could have been more determined, but, well, here we are anyway…”

The whiffy fallout from Louis Armstrong/Sausage has drifted away, and Adele has more things to do, more people to charm, quite likely more cups of tea to make in order to put them at ease. “It still feels odd, though, if you know what I mean,” she concludes, eager to explain the huge changes in her life from then to now. “In many ways, I’m still a ratty-haired blonde girl from Tottenham. So far, my music has passed all expectations, and occasionally reactions from fans take my breath away. Sometimes it’s difficult to let things sink in, and that can come across as me being a bit icy or unappreciative, particularly on television. But I often feel that if I let it sink in I’ll just melt into a puddle.”

(This feature first appeared in The Irish Times/Ticket, January 2011.)