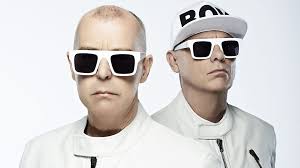 A mug of Caffe latte – up to €3. Single train fare from Laytown to Dublin – about €10. A weekend away for two in Prague (including meals, decent wine and unnecessary shopping) – about €1,000. A red brick house on Ailsbury Road – anywhere between €10m-€30m. Drinkies with the Pet Shop Boys – priceless. There are some things money can’t buy, and one of these is sipping pink champagne (“it’s what Elton would serve”) with Neil Tennant and Chris Lowe in the Penthouse suite of London’s Sanderson Hotel. Tennant does most of the talking, leaving the rather more cynical Lowe twiddling his thumbs and chipping in with vague asides. Despite the disparity on display, it seems obvious that we have a fully functioning working partnership here. By their presence alone, the message is clear – you can’t have one without the other.

Civility, no small level of style, compact campness and extreme politeness are held in great stock by the ‘boys’ (each of whom bears the air of college lecturers, albeit ones partial to champers and talking about Liza Minnelli, Battleship Potemkin, and Stock, Aiken & Waterman), so talking to them in such Philip Starck-designed surroundings should come as no surprise. We’re here to chat about their forthcoming album, Fundamental, which sees PSB return to matters of crucial importance to them: social commentary, political digs, emotional turmoil. They sing about these topics in their usual direct manner – excellent, unambiguous songs and lyrics underpinned by a decidedly non-sweaty but groovy selection of beats and subtle keyboard riffs.

Intelligence in pop music is a rare thing, agrees Neil Tennant, and being smart puts people at an advantage. “There’s a tradition of smartness in pop music – when did that start?,” ponders Tennant. “Sir Noel Coward, perhaps – he was a very good lyricist, smart, witty. Then there were bands like 10cc in the ’70s, and ABC in the early ’80s. Soft Cell, too, perhaps?”

Lowe offers another name: “Scritti Politti?” Tennant mulls over this for a second, before replying “Maybe too smart?” Chris nods in return, adding thoughtfully, “yes, perhaps a tad.” (This interchange is typical of their conversational flow throughout the interview, and is conducted with all the hale and heartiness of something quintessentially British, a middlebrow hybrid of Wind in the Willows and Gilbert & George.) “The Beatles, of course,” continues Tennant. “They had lots of intelligent songs, didn’t they? I think it’s important that pop music, if it’s intelligent, wears its intelligence very lightly. What we don’t want is a pop song that weighs us down with its smartness – such a weight could quite possibly cause the song to collapse.”

“People don’t like to be brow-beaten, do they?” asks Lowe, as he tops up our glasses. Tennant nods slowly. “I don’t like to think you’re being given the impression they know something you don’t. You might have a different angle on it, but at the end of the day, the same news media are pretty much available to all of us, although you may not want to read them. I’m always very wary of lecturing, and I hope we’re never accused of that. You do get acts in rock music – mentioning no names – who think they know something that you don’t.”

This is something you could never accuse Tennant and Lowe of; from the start of their immensely successful, quite idiosyncratic career, they have eschewed the usual rock star traits of bombast and condescension for something that closely approximates normality. Irony is used as a means of expression, and not as a weapon of mass superiority. Incredibly, the PSB unit has been around for 25 years. “Did we really meet up 25 years ago?” Lowe asks his champagne glass. “Yes,” says Neil, with something of a sigh. “We met in August.” Have they changed drastically over the time period, or have they evolved ever so slowly? Chris: “Or have we tried different things along the way?” Neil: “Or have we just gotten better at what we do?”

Back then, says Tennant, the circumstances of their lives were dramatically different. Tennant was working for a books company, while Lowe was studying to be an architect. Gradually, through a learning process that honed Tennant’s writing and Lowe’s musicality, the pair came up with songs. “I’d already written a load of songs on my guitar going back to when I was 12 years old,” says Tennant. “25 odd years ago I was sitting in my little bedsit in the King’s Road. Chris had written songs, but he had forgotten them all.” Chris looks up from the table: “I’m not so sure they were songs, they were more doodles on the piano.”

“When he came into play with my synthesizer I thought he was very musical,” Neil recalls. “Which was good; and the combination worked. In fact, the combination on that synth and guitar came up with some good songs. The turning point came when Chris came back from his parents’ house in Blackpool, and he’d written a whole instrumental of a song on a piano; I wrote the lyrics, and that was Jealousy.”

Pet Shop Boys, says Tennant, have since come from being very naïve to quite sophisticated. “Except we don’t really like to sound too sophisticated. Ultimately, we like to make points in a very light way. It is, after all, only pop music, so we hope it sounds good on the radio. We’ve never really had fear, and I think that’s what has kept us together. We weren’t really scared to be on Top of the Pops for the first time – we just thought, well we’re us, and we’ll be us. Doing just ‘us’ made a contrast to everything else on the show, and that was clearly a good thing. And then we started to tour, but only when we could afford theatrical shows. We made records with other people – dream people such as Dusty Springfield, Liza Minnelli, David Bowie.”

“We had this furious idea,” Tennant continues, “that we would always maintain our integrity and do things our way, and not be pushed. When we got signed to a record label (EMI), we knew we weren’t going to be scared and told them what we were going to do. We demanded to go to New York to have our first single remixed. We did that, and then we told them what kind of formats we wanted the song released in. We did that, and then the record wasn’t a hit! We had quite a lot of courage – and ideas. Record companies like it when you have ideas. We’ve never lost that, and that’s why we’re still here.”

They’re also still here, of course, because they happen to be very good at what they do. Pet Shop Boys remain something of an anomaly, however, in the nature of pop music. Aren’t they too mature? Old fashioned, even, when compared to Black Eyed Peas or Girls Aloud? Not so, says Tennant, who sees cultural value in the fact that people who are middle-aged (statistically, at least) consume just as much pop music as their offspring – and with greater knowledge, experience and context. Hip-hip-hurray for the grey hairs!

“It’s quite interesting that as time has gone by, pop music has developed into something that is consumed by people who are deemed to be ‘old’. Originally, it wasn’t meant for people of that age, which is possibly the reason why intelligence in pop music – what we were talking about earlier – is such a surprise. Intelligent pop is aimed at the readers of Word magazine, which puts it into something of a niche; it’s where people like Neil Hannon and Rufus Wainwright – both of whom are very good examples of intelligent pop – reside. Pet Shop Boys, on the other hand, are marketed towards the mass market, from South America to Japan. To be frank, we’re aiming for Top of the Pops a week on Sunday.”

Tennant admits that occasional PSB excursions into different cultural areas (stage shows, soundtracks) are of a minority interest. The primary focus is the challenge of the mass market, and how one might make an impact on it. “I wouldn’t want to sit here and have people thinking we’ve written some great songs but that no one really knows them. I’ve always had that, and it’s something Chris and I share, because pop music is a kind of a discipline – you have to edit down what you do to the strongest ideas and music. It doesn’t always work, but when it does it works really well.” He pauses to take another sip of champagne. “I have a strong feeling that Bono and Edge think that the mass market is a primary thing. They’re really fighting for it, aren’t they? I think that mass-market success is absolutely at the heart, the concept, the point of U2. Mass-market success gives you power.”

For Pet Shop Boys, says Tennant (and Lowe nods approvingly), it gave them the power to change the mainstream by being deadpan; the power to introduce the concept of minimalism into record sleeve design, marketing, presentation, visuals and one-word album titles (including Please, Actually, Behaviour, Very, Bilingual, Release).

“If you’re doing that in a limited niche market, an almost culty way,” says Tennant, “then it gives you the power to have a song called Rent, which was inspired by rent boys, and having that in the Top Ten. That’s when you help to move things along.”

(This first appeared in The Irish Times/Ticket, 2006.)