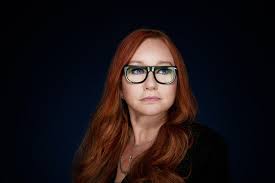 She is, as they say, a different kettle of fish, altogether. For some, American singer/songwriter/performer Tori Amos is many things to many people: a firebrand of individualism, a torchbearer for idiosyncrasy, a beacon of light for those wavering between independency and soul-selling.

To others, she is the oddest side of odd: the woman suckling a piglet on the cover of her third solo album (Boys for Pele), the woman who unabashedly engages with songs that explicitly reference events from her life (rape, religion, sexual awakening, marriage, miscarriage, gender issues) as well as topics not usually covered by a female pop star with a piano (misogyny, homophobia, masochism and, but of course, beekeeping as a source of female empowerment).

Amos is at it again, but this time her new record is, well, another utterly different kettle of fish. Released on the classical label, Deutsche Grammophon, Night of Hunters is a concept album comprising a 21st-century song cycle inspired by classical music themes. Autobiographically set in a rambling Georgian house on the outskirts of Kinsale, County Cork (any resemblance to Amos’s house there is quite likely deliberate: “it’s a safe house. I flee situations, experiences and people to get there; it protects me and helps me reinform myself”), the record’s themes touch on mythology, conflicts, tolerances and resolutions within marriage, and the dual nature of what she refers to “the hunter” and “the hunted.” It is, all told, an incredibly ambitious piece of work by a virtuosic artist at the height of her narrative and musical powers. It’s also – let it be said – a bit mystifying, out-doing Kate Bush and leap-frogging over Joanna Newsom in terms of theme, execution, quirk, strangeness and charm.

We meet Amos in a baroque, brothelesque basement of a London hotel. She is smaller than you might think, smarter-than-smart, a mixture of petite, pithy and panache. Deutsche Grammophon approached her, she says: “They have a doctor of musicology, and he made a point of seeing some of my live shows. Along the way, he asked me how I felt about 21st-century song cycles based on classical themes. I said, a tall order, easy to get wrong, but too tempting to say no to.”

It was also a challenge that Amos, a former child prodigy, simply couldn’t resist; by the age of five she had started composing instrumental piano pieces, and a short time after won a full scholarship to the Preparatory Division of the Peabody Conservatory of Music. By age 11, the scholarship was rescinded, while her precocious interest in pop/rock and her dislike of reading sheet music quickened the end of her classical training. “They said, what do you want to be and I said I want to be a composer. They said, a female composer? Be a concert pianist, you have a chance – maybe one in a billion. Unless, of course, you want to go to the pop world. So I thought, one in a billion? I’ll take those odds one day…”

Presented with the opportunity of the song cycle, Amos agreed to forge ahead, albeit with certain conditions: she needed the tools by which to work with, and they had to supply her with all the music. Deutsche Grammophon’s executive producer, Dr Alexander Buhr, then provided her with extensive biographical details on some of the great composers of the past 400 years as well as recordings. Amos then applied “a very studied devotion, and a delicate ruthlessness” to poring over the works of, among others, Schubert, Debussy, Satie, Bach, Chopin, Granados, Mussorgsky and Schumann. Was she familiar with all of the composers? “No, but that was okay,” she says. “I listened and my ears told me what I needed to know; everyone got a fair shake.”

Through a typically audacious blend of fearlessness and melody, Night of Hunters works as much as a song cycle as a highly intelligent pop album (in other words, you don’t have to have an in-depth knowledge of classical music to, you know, dig it). Interestingly, it arrives at a point where it can sit very comfortably alongside pop music’s more eccentric or offbeat offerings; it is, in effect, a real work of intensely personal musical creativity by a bona fide artist.

“The real danger would be to have done a prog-rock/classical hybrid,” Amos remarks, “which I think would have diluted the work. I would love if people got the background because if you are taking on board a classical form like a song cycle it’s got to work as a piece of sonic architecture; it has to have a certain amount of plinths in order to make it work so that it’s not just an exercise in merging styles. What I’d hoped was to walk a very thin tightrope with all that’s connected with the record.”

But she walks a thin line most, if not all of the time, doesn’t she? “Yes, well, I try things out, but I was trained at the Peabody Conservatory and for all the slagging they get the upside to it is that some things were ingrained, and one was that female composers didn’t really have the same opportunities as men. So something like this is just irresistible.”

It’s exactly 20 years since her debut album proper (Little Earthquakes) was released. From then to now one imagines she has been dragged through the hedgerows and back again.

“There have been tumultuous times,” she agrees, “because in creating there has been, can be, a delicious excruciating process in composing. It’s a very lonely experience – it isn’t like jamming with people – and you push yourself sometimes to feel things in a way as a writer that perhaps other people would want to deny or conclude too quickly. Instead, I say: this happened, so let’s go back into it and investigate. You need to go back in because you really need to find out how you feel about it. No sentiment, either, get outta that frame of mind.”

Where does she now see herself in pop music terms? Does she view what she does as being in competition with the likes of Lady Gaga or Katy Perry, for example? “Oh, no! They’re great at what they do; I could be Gaga’s mom, I suppose, but being where they’re at, commercially, is not a good place to be. As for where I dwell in pop culture – well, I don’t think about it, to be honest. I reckon it’s more fun to keep creating, to be a creative force. I’d like to see myself known as a composer – and I think my work will move more into that. I’m not sure where it’s all going, but I’d like to think I’m carving my own niche for what feels right at the time.”

Does she agree that she has one of the most distinctive back catalogues of the past 20 years? Too smart to blow her own trumpet, Amos instead says, “there’s a lot there, for sure; but I own my own publishing and copyright, and I’ve had that for over 20 years now. I remember all kinds of people would approach my father – who has looked after that side of things for me for a long time – and they wanted me to sign away my publishing and copyright for very little and for a long time. But my father said if so many people want my copyright then why shouldn’t we want it, too? I have to thank him, every day, for the business nous to question that. So it’s all about the catalogue – to do good work with it, build on it, find different perspectives with it.”

Continually altering perspectives are what have ensured and maintained Amos’s enriching creative output over the past two decades. Meanwhile, Amos retains her thirst for redevelopment. “If you start repeating yourself,” she concludes amid the burgundy chintz and ornate curlicues of the bordello-like dungeon, “then it’s the beginning of the end.”