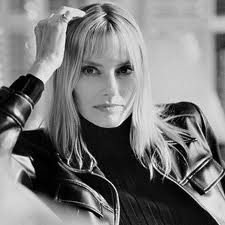 She’s been known to moan about her lot in the record music industry, but Aimee Mann is, possibly more than most, justified in making her continual barbed statements: fact is, she has been well and truly shafted. Since her days in US pop/rock band ‘Til Tuesday in the late 1980s, Mann has released solo album after solo album that almost defy the meaning of the term ‘quality control’.

In the past twenty years, she has maintained a level of creativity within uncommercial popular music that has marked her out as one of the finest female performers in rock. Welding an acutely observant lyrical stance (she’s the daughter of a psychiatrist, don’t you know) to a classic power pop blueprint, her material creates a lesion wound across the senses that is vaguely painful and quite irresistible. She might have a reputation for being difficult, but if genius is a fine line betwixt the headstrong and the heart, then this Mann is your woman.

With 20 years since the release of her debut, Whatever, Mann views the past 15 years as being a defining period for her in terms of creative output. Certainly, there seems a definite line she can draw between the ‘Til Tuesday years and the start of her solo career. “For me, it seems like since I started working on Whatever that things have really changed, and that I felt much more creative and already starting the process of separating myself from the desires of what record companies wanted. That has gotten more so as the years have passed.”

Almost every artist struggles with the same kind of problems at major labels that she experienced, Mann relents, although she says she’s different in that she doesn’t mind talking about it. There’s always an implied backlash or blackmail scenario when you’re signed to a major label, she says; a double edged, no win situation. It goes something like this: the artist is afraid that if they say how it really is they’ll be punished for it in some way, typically the record label won’t promote a record. For a long time Mann felt like that, too, only to realise that the record companies weren’t promoting her albums no matter what she did. Result? She started not to care anymore.

“I found it very depressing, very demoralising and there were many times when I thought I should probably just quit the business. It’s difficult to impart, but I think what happens is you spend a lot of time in a world where the only people giving you feedback about your music are people at the record company. You’re trying very hard to produce work that you can be really proud of, but all the feedback you ever get is that what you do is not good enough. You start to think, why I am doing this; that you are, in fact, just not good enough, that maybe you should just face the facts and get out.”

If, as Mann has done time and again, an artist creates a superb piece of work, gives it to the record company and it’s not even given cursory attention or promotion then a peculiar sinking feeling kicks in. “You begin to realise the very strange set of circumstances you’re in as an artist,” she explains. “You’re signed to a label, the label’s job is to promote the record, but they’re not doing that, and yet you can’t leave the label because it’s all at their discretion. They can pick up your option (to make more records) or not, but there are no options for you. If they’re doing a bad job, you’re just stuck with it. And you’re stuck with it for record after record, which at their discretion they can release or not release. You can work for a year on a record and then have them say, hhmm, it’s not good enough, make us another one. That’s incredibly demoralising – who wants to keep writing the same story that’s just going to be rejected time after time? After a while, you just don’t write the story anymore.”

Mann’s third solo album, Bachelor No. 1, was originally slated for release in 1999, but was held aloft at arm’s length, as if it were a soggy nappy, by a major record label who claimed the songs just weren’t commercial enough. Cue the leaving of Mann and the foundation of her Superego label. Now operating within the US as a standalone company and licensed to various labels around the world, Mann and her Superego look set to reap the rewards of independence.

Since then, of course, Mann has been garlanded with honours and plaudits. Through her songs on Paul Thomas Anderson’s Magnolia – not forgetting her marriage into the Penn family through singer/songwriter Michael, brother of actor Sean  – her taste of Hollywood has to date been very sweet. It’s safe to say that while she isn’t setting the charts on fire, Mann’s wilderness days are well and truly over.

“I got to participate in a project that artistically was wonderful,” she enthuses about Magnolia. “For me, it was very exciting to see my music being used within a film. It’s exciting for any music to further the narration or underscore the emotional scenarios in a real way, but for that to be my music is terrific. I like to contribute to anyone’s artistic vision, if it’s good. And because the soundtrack was on a major label (Warner Bros) and the fact that they rallied around the movie and got behind it come Oscar time, for once I had the power of a multinational corporation behind me, and that introduced me to a far wider audience.”

By her own admission, Mann is now established in a bona fide Hollywood family. Michael does his own thing in the music industry, while Sean is highly regarded an actor. As for Mann – well, she just sits back and observes, making candid mental notes on human behaviour and social graces. “They know a lot of famous people,” she understates. Fame, claims Mann – and she means quite large-scale fame along the lines of global recognition, not local radio disc jockey fame and the like – does something that’s very hard for most people to overcome, something that is patently not good for you. It makes you reliant, she says, on the appearance of things to the detriment to how they really are. Her pet theory? When people become confused about the difference between the image of something and the reality of something then that starts to get close to mental illness. You read it here first, folks…

“A lot of people have that problem, and I think fame is like a type of weird trauma that happens to people that makes them unable to distinguish reality from its image. That’s just my observation – I’m not pointing fingers at anyone (oh, no?), but it’s a whole world and you can see it happening in certain people who have taken the appearance of something, who have mistaken it for reality and who don’t understand what reality is. They’re disconnected from their true selves. It’s shocking, and it’s interesting to think of fame as a type of trauma because so many people think it’s a pleasant thing. But it works on you – you develop a dependence on it and you think it’s real. But it’s not real to have everyone wait on you hand and foot. That’s not real! That’s my theory, anyway.”

And so it goes. What is very real is that Mann’s primary motivating creative force – her most prized virtue, she says – is analysing people and their behaviour. Their emotional states – loss, estrangement, alienation, heartbreak – as well as their place in the universal quagmire. “What’s wrong with people, anyway – they’re crazy!” Her worst aspects? She gets disoriented very easily, and is very disorganised. “I’m easily overwhelmed and I just can’t get it together. I’m the kind of person that if I go into a supermarket and walk three aisles down looking at all the different coloured cereal boxes, I just kinda go into a stupor. I just can’t handle it.”

You know what you need don’t you, Aimee? “What?” You need to be waited on hand and foot…