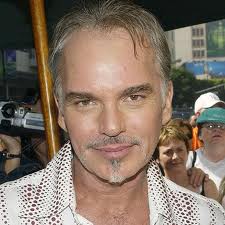 You know the many faces and the tri-part name, that he’s one of the most highly regarded American actors of his generation; that he used to be married to one of the most high profile American actresses of her generation; that he and his former wife, Angelina Jolie, were portrayed in gossip magazines as The Wild Couple or The Weird Pair. What you might not know is that Billy Bob Thornton is a man who measures his words the way he measures his breath: evenly, as if he thinks about inhaling/exhaling air the way one would about looking at a precious work of art.

Two other things about Billy Bob Thornton you might not be aware of: firstly, he knows too well that lost causes are the only ones worth fighting for; secondly, he’s really quite good at writing slow-burning country/folk songs. Born in Hot Springs, Arkansas, in the mid-1950s, the son of an Irishman (the rest of him is Choctaw Indian and Italian), Thornton’s background is one that is steeped in relative rural poverty, an early life he admits to being “strange, twisted and screwed up”. The family diet back in the 1950s, he says, consisted of poor meat (squirrels, possum) that his grandfather hauled out of the nearby woods while his father was working coaching schoolboy basketball teams. The only other forms of entertainment were the radio, through which he heard nascent rock’n’roll, country music and crooners, and evenings listening to stories being told on the front porch by his mother (a psychic with her own eerie tales to tell), relatives and neighbours.

It might be a cliché to state that Thornton was a born storyteller, but the evidence is there for anyone who cares to investigate. From his movies to his music, Thornton has narrowed the focus from the supposedly sensational (married numerous times, the owner of an electric chair) to the sanguine. Yet if he himself is a born storyteller, his own life is something that couldn’t be made up by a master of fiction. Or, for that matter, a gossip columnist.

Continually at odds with his father, who died when Billy Bob was 18, and with whom he never really made his peace, Thornton chose baseball over basketball as a post-High School career choice, winding his way through late teenage and early 20-something years in a range of ill-judged jobs on the periphery of the Arkansas music scene. By the mid-1970s, he had been in several rock’n’roll groups (including Tres Hombres, a ZZ Top tribute band) and for a while it looked as if the music industry would raise this Southern maverick as one of their own. By the end of the 1970s, however, it seemed as if music as a life choice would not be his for the taking, and so, armed with ambitions, not too much money and his best friend (Tom Epperson, a budding screenwriter) he moved from Hot Springs, Arkansas to Los Angeles, California. It was, in retrospect, a journey from the frying pan into the fire: staying in sleazy motels with their typical accessories and attractions, jobbing in low-rent pizza joints, subsisting on a diet of potatoes that eventually led to a heart attack brought on by malnutrition.

“I went to Los Angeles with the idea of going into acting, due to being so frustrated with not getting anywhere with the music,” says Thornton. He’s wearing his grizzled, hippy face today – the real Thornton, not some superbly realised movie character – and is mannerly to a fault. In truth, he looks more like a roadie for a rock band than an Oscar winner, yet his earthed demeanour underlines his craggy appeal to the point where – a rare occasion, this – the conversational barriers between interviewer and interviewee are dismantled and put away for another day and another person.

Gradually, small roles in Z-movies (has anyone ever seen Babes Ahoy and Chopper Chicks In Zombie Town?) came his way, alternating with more low-level jobs in fast food outlets, stage work and television shows. Come the end of the 1980s, Thornton was making a living.

“A meagre living as an actor, it has to be said, but I thought it best to stick with it. And then Tom and I scripted One False Move – a generally unseen movie, but a critically acclaimed one. That got Tom and myself more and better work in our respective areas. Then came Sling Blade in or around 1994, and when that struck gold [Thornton, who also starred in and directed that movie, nabbed an Oscar for the screenplay], I became what some people call or consider a movie star.”

If you become a movie star as yourself, he says, that’s what people want to see. In Thornton’s case, the audience, unusually, allows him to be different in every movie he makes. He can write, direct, act, make music and people are forgiving of him. How many other people in Hollywood are allowed to do that, he ponders. “In acting, I disappear into these other people, these other lives, other worlds,” he reveals. “There are parts of me that are in them, not necessarily the way I behave in my real life, but things I have observed or feel.

“As a singer/songwriter, I stay – whether it’s comfortable or uncomfortable – in my own reality, my own private radio, so to speak. And it’s more personal. In my music, there is no distance between myself and other people. I make a movie and it comes out a year later, and when people see it I’m not there. In music, what I love to do is to connect with the audience, especially in a place like Ireland, which has such a storytelling tradition. The joy of music for me is to come out on stage, play music for people, have fun, for no one to be there to judge or compare for just that period of time. That’s what is great about the music and it’s what you can’t do as an actor. Even in the theatre you can’t do that as an actor because you’re still trying to shut the audience out – when you’re on a theatre stage you don’t want to know there’s an audience there. In music you do – you want, have to have, the audience there with you.”

The search for real life amidst the stink of Hollywood’s casting agency grooming process is writ large in Thornton’s work. He believes (and it’s a valid belief, copper-fastened by undeniable truths involving words and character traits such as integrity, honesty, artistic commitment) that people accept him for who and what he is more than many other actors. In his real life, he says, he is not a part of the Hollywood gossip machine. “That’s just a bunch of horseshit, really, and so untrue. You don’t see me in the gossip magazines coming out of such and such a nightclub or whatever party, because I hang out with regular friends.”

He has, therefore, come to hate the media’s jealously and backbiting that masquerades itself as journalism. “God bless anyone who makes a record or a movie and puts it out there,” he comments. “Obviously, some things are better than others, but the fact that people try, the ones who mean it, is good, and I’m all for them. The people who are out to make money, to be famous? Those people I don’t believe in.”

Like Thornton’s character Ed Crane in one of his best movies, The Man Who Wasn’t There, he’s an essentially lonely guy who has, to date, walked through life not knowing exactly what he’s meant to be doing. He’s done the commercial movies (Armageddon – “a two-hour piece of trash I wish I hadn’t done”) as well as the slightly more loveable left-of-centre projects (One False Move, Sling Blade, Monster Ball). Probably unlike any other Hollywood actor in the history of cinema, he says he doesn’t care how ugly he looks in a film. Integrity is all, he states. You believe him when he says this.

“Absolutely. I only want to do things that have integrity, and I don’t mean for that to sound pompous. What I mean by that is, I think we’ve got enough commercial rubbish in the world already and I don’t want to add anything to that. The only proof I have in wanting to have integrity is if I showed people the list of movies I have turned down. I’ve been offered about 20 movies in the past two months and I’ve turned every one of them down. I’m not a wealthy movie star; I don’t make that much money – I’m still an actor for these movie people and I know I’m not the first person they call. For a famous actor, I make a modest living, which is more than a plumber I admit, but it’s relative.”

Thornton says he lives every day like it’s his last, each day letting his friends and family know how much they mean to him. “I want to make sure that everybody knows,” he emphasises, as if he’s making up for lost time. Which, as it turns out, he is. “Some things have happened too late for me. My brother died and I felt I didn’t let him know enough. There are things I didn’t talk to my dad about… I just want to make sure it’s never too late, that I don’t have any regrets about my family. As long as I can do that I’m okay. In terms of ongoing goals in work, as long as I can do a record a year or so and one movie a year that I believe in and make a living for my family, then that’s what I want to do. And in those movies and records say things I believe in and never do it for any other reason than being creative.”

He feels fortunate, does Billy Bob Thornton. He describes himself as the luckiest guy in the world. “I’m getting to make music, which is my dream come true, and to act and play characters I love. For the first time in my existence, I have days when I’m not nervous. I never really had that.”