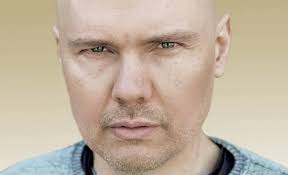 Billy Corgan has been both baton master and whipping boy of a post-grunge generation. He was the front man of Smashing Pumpkins, the band some initially considered to be Nirvana’s poor relative; he is the rock star that even Sharon Osbourne – wife of dear, cerebrally-departed Ozzy – found to be unmanageable; he is a former boyfriend of Courtney Love, and in an addendum to this, the former lead player in a music tabloid soap opera (complete with the usual self-absorbed messianic control freakery and public bouts of depression) that ran its course when Smashing Pumpkins imploded at the end of 2000. The focus on the music, it seemed, was getting lost – all people could see was a band in tatters, sliced apart by drugs. Corgan, all six foot three inches of him, a spectral goth figure in black, sporting a shaved dome, wanted out.

A stint playing guitar on a New Order tour brought him back to Planet Earth, but his post-Smashing Pumpkins group, the short-lived Zwan, suffered from a recognisable malaise: people once again being too interested in the lead singer and not the band or the music. Perception is a dangerous thing, and when it’s wrong it’s a killer – Corgan’s new solo album, TheFutureEmbrace, obviates the requirement for a permanent band format. This time he stands or falls on his own.

“The sum total of my life is telling a story that I always felt would be told,” says Corgan during an extended period in London promoting the new record. The mood is calm, almost mellow, and Corgan is in fine form – polite, considered, and not at all like the reported anti-media ogre of some years back. “If you looked in on me at different points of my life, with different albums, the perception of me has shifted through the years. At times it’s been very polemic, super positive, super negative, and I disagreed with all of them.

“All I’ve ever asked of anyone is that they accept me as a total human being, some good and some bad. The story of someone who has wrestled with things all his life is more compelling than someone who inhabits a perfect picture. On occasion, I’ve been made out to be a wretched, whining whatever, and those people are mistaken because there’s a great deal of sensitivity to my work. At the same time, I’ve overridden that with my sense of ambition, to prove some point that didn’t need to be proven. My life over the past fifteen years? It’s a good story.”

It is, too – but where to tell it? Aside from his latest incarnation as a best-selling poet (his debut work of poetry, Blinking with Fists, was the highest debuting poetry book on the New York Times best-seller list in over a decade), Billy Corgan’s got a blog and he’s going to use it. For the past four months, the lanky, loquacious singer has been telling parts of his life story on his website (www.billycorgan.com), and it makes for compelling, voyeuristic and occasionally uncomfortable reading. “It’s just the beginning,” Corgan tells me. “It’s a simple story in which a person that comes from a basic background of lots of abuse tries to figure their shit out. For my generation, this is many people’s story.”

Self-therapy through the expunging of inner turmoil has been at the base of artistic endeavour from year dot. Walking a thin line between selfishness and selflessness, the artist, says Corgan, is there not only as a compiler of self-help footnotes but also as a lightning rod for other people to hold onto.

“For me, it’s not so therapeutic because it’s dredging up a lot of bad memories that should really have been forgotten, but the nice thing is that I’m getting a lot of emails from people saying the way it’s written is making them look at their lives, and making them think about their stories. It seems to be opening things up for them. The people that don’t get it don’t understand the focus of that on myself; the people that get it understand what I’m saying, which is that I’m really not too different from anyone else.”

And yet by the nature of his stature in modern rock music, he is: Corgan might not be as important a figurehead for a disjointed generation as he once was, but he retains more than an imprint of spokesperson status. He views the blog writing as a means of communicating to his fans (and even casual observers) a rock star’s vulnerable balance between self-obsession and self-expression. He says that what has been written so far is merely “the tip of the iceberg; it gets a lot crazier and weirder.” This is good news for the music industry equivalent of the red tops – and indeed, perhaps even the tabloids themselves should Corgan decide to reveal aspects of the Nirvana/Courtney Love years. Will there be self-censorship?

“Does it speak to the story I’m trying to tell? Some people are mistaken by thinking I’m trying to reveal every secret. What I’m really trying to do is tell a story, and like any story, or movie, you have to edit it to keep the plot going. I’m not going to go into every sin, because it would be boring after a point, and unnecessary, but there are a few sins in there that are critical to the telling of the story. It’s an autobiographical tale, but it’s not just me from start to now – I wouldn’t be doing it if there weren’t greater artistic reasons for it. I’m still figuring it all out.”

Yet Corgan likes the writing platform, and sees it as part of his artistic and creative future: “There isn’t a great deal of censorship or editing, and at certain times the plot wanders. Yet it is what it is, and that’s what makes it so compelling. It’s almost like a bootleg!”

Unlike TheFutureEmbrace, which is lush, textured, contemporary. Thankfully, it’s also a record without any of the ’80s-referencing so beloved by the current crop of rock bands.

“I think there are unwritten rules when you enter past your post-35 years-of-age life. Whether you’re conscious of them or not you can feel the pressure; the record company executives tell you in a very nice manner that you’re not quite touching the kids in the way you once did. So you have simple choices when you hear that: you can homogenise what it is you do, you can sentimentalise what you used to do, or you can do what I have done – leap off a cliff.”

TheFutureEmbrace is the brave, successful sound of someone who would rather die on the point of impact than to be one of rock’s walking wounded. “It’s all a part of my maturity as a person to make music I believe in,” states Corgan. “I don’t care what’s going on elsewhere, I don’t care whether people think it’s cool or not, because I have enough confidence to believe that eventually people will come around to what I’m doing, even if it takes 20 years.”

Corgan has lived a life less ordinary, that’s for sure. He agrees with my observation that it’s a more rounded life than some people might think. “That’s totally dead on. I’ve always felt that. There’s a thing that happens in culture all the time – a new artist comes along and they’re given a stamp: this is the nice guy, this is the crazy band. And essentially there will never be any need to change that stamp, because most artist’s careers don’t last long enough for there to be time to reconsider. But if you have enough talent to stay around long enough then people will come to their own conclusions and stop listening to the handy ones.”

(This first appeared in the Irish Times/Ticket, summer 2005.)