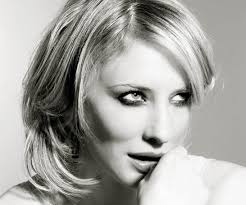 There are few actresses for whom the word ‘luminous’ genuinely applies, but Australia’s Cate Blanchett is one of them – although by now she is probably weary of the description. And yet it’s true; there’s something about the way she looks up close and on the screen that makes you want to reach out and touch her skin to check if it’s as other worldly as it seems.

Such musings are par for the course, needless to say. In the real world, Blanchett is a real person with occasional bouts of skin problems, no doubt. Right here, right now, however, no such blemishes spoil the Blanchett countenance. Up close and personal, the actress is somewhat less incandescent than, say, her role as Galadriel in The Lord of the Rings/Hobbit film series, but you can nevertheless glean a natural, organic quality to her sense of well-being as she sips from a frothy cup of (quite possibly Fair Trade) cappuccino.

“It’s all a bit therapy-based, isn’t it?” she responds to a question as to whether a person acts for reasons of self-expression or ego. Blanchett says she isn’t particularly interested in the promotional part of her work, talking about herself or what motivates her for any given role, “because I don’t stop and think about that every second of the day. I think I do acting because I’m quite curious about what makes people behave the way they do. I find human beings endlessly interesting. So for me, I suppose acting is about delving incredibly intensively into various pockets of life and then you leave it and move on. You never have to make a decision as an actor about what you’re going to be when you grow up.

“Is that good? I don’t know… I think it would drive some people mad, and does. Acting is a form of madness, and I think that’s why I constantly say I’ll give it up. I haven’t yet, but it doesn’t mean I won’t. At the moment, I really enjoy it, I think I have a love affair with my work.”

Born in Melbourne in 1969, Cate (an abbreviation of Catherine Elise) Blanchett’s background is more theatrical than anything else: drama at Melbourne University, a graduate of Australia’s National Institute of Dramatic Art, roles in the classics (Miranda, Ophelia), parts in the likes of Anton Chekov’s The Seagull and David Hare’s Plenty. A couple of early film parts went unnoticed (1994’s Police Rescue, 1996’s Parklands), but her role in 1997’s Paradise Road sent her on her way. Subsequent appearances in Oscar and Lucinda (1997), Elizabeth (1998) and The Talented Mr Ripley (1999) highlighted her uncanny abilities to invest a role with an unerring sense of equal parts responsibility and impishness. Blanchett is also a movie star that, unusually, doesn’t necessarily want to be the centre of attention within a film: her five-minute cameo, for example, in The Shipping News, is quite indelible. She is more into the idea, she implies, of the actual work than aspects of a wonderful career unfolding in front of her.

“A career is something you can say you’ve had when you look back over your life at the age of 70 or 80,” she remarks. “I don’t feel like I’m building towards something. Coming from Australia, going to theatre school, coming out of NIDA – there were so many fantastic theatre actors that weren’t working, and I just knew I couldn’t be an out of work actress. If I hadn’t got work I’m sure I would have gone back to university and done something else. I was always bemused and, in fact, found it hilarious that I always got work. I’m always quite pleased that I get one job after another.”

As ego-less as someone in her position can be (a highly accomplished actress, regularly and now unnecessarily compared to the likes of Meryl Streep in terms of ability, quite likely the best movie actress of her generation), Blanchett says there is a misconception as to her standing: “There are about two or three per cent of actors that can green light a movie – whatever that means – and that’s to do with box office receipts. I don’t think I’m necessarily in that league.”

It’s likely she won’t be, either, but one gets the impression that’s because she wants it that way. The kind of person who would rather not know the answer to certain questions, she seems content enough to allow her life to flow rather than for it to be directed. Her favourite answer to certain questions (“I don’t know”) is not so much a three-word mantra trotted out to knobble the interviewer, but rather a genuine response, given following a moment or two of internal head scratching. When she is asked what got her into acting in the first place, she replies that she’s not particularly sure if she really wants to know the answer. “I just know there might come a day where I don’t want to do it any more and then I’ll do something else. As a result, it’s important to me not to make this” – a swerve of the hand around the room denotes the received opulence of her movie star status – “the complete centre of my life.”

Somewhat more instinctive than academic (“I don’t know that you can teach acting. Sometimes all you can do is awaken something that is dormant within somebody. It’s a bit like playing tennis; we can all play it a bit but some people have the gift. And if those people work at it they can become incredibly good at it.”), Blanchett refuses to get bogged down in self-analysing. She dislikes watching her own movies (“all I see is myself”) and as a rule doesn’t stay for the movie at premieres of her films (“it’s so petrifying, like being at your own opening night and watching yourself on stage.”) When asked does she have a measure of herself as an actress, she says she simply doesn’t think about it. “What’s the point? Where does it get you?”

Because of her inquisitiveness about the complex nature of the human being, she says she prefers rehearsal and research to actual performance. “At drama school I always enjoyed the rehearsal process the most and I had to learn to enjoy the performance part of it – I find getting up in front of people the most difficult. I went to Melbourne University but I was never an academic, and what I loved was sitting in the library and going through the books, using the resources. Now I like the performance as much, but it’s the thing of suspending of the self. So it’s never a dry research process, it’s always going to have a physical outlet. I love that. I’m reading and researching as if I’m going to write an essay, and then I bring it to life…”

A firm believer in fate and serendipity, Blanchett reckons that if projects or movies are cynically conceived they are bound to be disappointing; if they happen naturally, then so much the better. And what about the sense of gratification that an actress of her standing must surely feel when she nails down a character? Her answer is typically selfless and self-critical: “If you feel you’ve nailed a part down, then the incompleteness of what I see is probably what keeps me working.” Continually striving, forever busy (“Sometimes I find it very hard to sit still. No matter how tired I am, I create stuff to do, so I think I must love being busy.”), it would seem that if Blanchett has a measure of anything in her working life it’s one of progress. Certainly, the past 15 years have seen her blossom from theatre-based ingénue to international movie star. She allows herself a moment of self-reflection: “When you can see progress, that can be addictive. I think I’ve seen progress. I don’t replay old movies of mine, but I feel that I’ve achieved progress. Anyone who works intensively in any given medium for four/five years understands the medium of operations better.”

Does it get any easier? “I wouldn’t say it gets easier,” she replies, as she finishes her coffee, spooning out every last vestige of froth in delicate but assertive sweeps, “but I think you are more aware of the possibilities. You know more about talking to the camera. What you do becomes more fluid.”