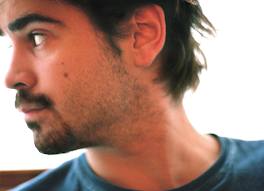 There comes a point in every wild child’s life when they have to either clean up their mess and glance back at it ruefully or wallow in it and suffer the consequences. We can easily see which route Dublin actor Colin Farrell has chosen – he sits beside me in a state of health so rude it’s almost unforgivable.

This is probably why, as soon as he enters the 5-star Dublin hotel lounge and strolls over to the cosy sofa, that female heads swirl and female conversations comes to an abrupt halt. It doesn’t last more than a couple of seconds (the Irish like it to be known that they are cool to the point of chilled with rock icons and movie stars) but for that brief period of time we are all members of the Colin Farrell Appreciation Society. Yes, even the blokes, who to a man know it’s pointless to seep a smidgen of envy. Let’s be honest here – Farrell looks the proverbial million bucks. He knows it wasn’t always that way, however.

“At some points,” he recalls of what he refers to as the lost years, “I was removed from the amount of passion and curiosity that I had about acting. Maybe that passion and curiosity got diluted or a little bit toxic due to the amount of success and fame that came my way.” Farrell was 22 years of age when Hollywood came knocking, and, he says with a smile, “there was so much on offer. It was Willa Wonka’s chocolate factory, or the keys to the exact city of your dreams as a child. I remember Steve Martin introduced me at the Oscars some years back with the words ‘the next step is rehab’.”

The comedian was right. We’re not here to highlight mistakes, lies and misdemeanours, but Farrell isn’t the type to airbrush his past and make it look any less ugly than it has been at certain times. For a period between 2001 and 2005 it looked as though he was hitching a one-way lift on the highway to Hell: partying like there was no tomorrow (“It wasn’t hard to find 20 strangers who wanted to go back to my hotel room till 8 o’clock in the morning,” he has admitted), embroiled in court cases regarding a leaked-online sex tape, and then a spell in rehab for exhaustion, and drug and alcohol dependency. He entered rehab in 2005, admitting that his body and mind were fragmenting; he left rehab after some weeks emancipated.

He is, he says with a palpable sense of relief, genuinely delighted that this particular chapter of his life is over. “That chapter was pretty much a seven year block – from going over to America in 2000 to the Miami Vice movie in 2006 – and it came crashing down like a house of cards. It doesn’t make a noise but you can see the structure is gone. Initially, I was fearful – you know, ‘Jesus, what’s going to happen, the phone isn’t ringing’, all of that.” He hadn’t known, apparently, what a bad reputation he’d landed himself with (“I was never screaming at people or trashing rooms”), but the pinch started getting tighter when he realised that film studio head honchos weren’t necessarily open to (as they say in Hollywood) reaching out to him.

“Oh, yea,” he virtually winces at the memory, going on to lucidly outline his failings. “Without any self-aggrandising, the myth had shown itself to be fallacy. That said, I’m glad to say I have a bit of goodwill in Hollywood; it might seem a contradiction but it actually exists. It’s the same in Ireland and other parts of the world: blood beats throughout hearts and people experience stuff like hope and faith and gestures of kindness. I know that people rooted for me during those wild years, and that was lovely to discover after the fact.” And the practicalities of being seen as not so much a loose cannon as Guy Fawkes? “Well, after Miami Vice some big films went away from me, but that was kind of okay because I had other work lined up that provided an opportunity for me to go back to the more simplistic elements of what I was trying to do, which were the elements I fell in love with – a good actor that tells a story in a way that your voice comes across, but also that you allow the person who is perceiving it to have their own interpretation and experience of it. So I went back to that, and through that period I did movies such as Pride and Glory, Cassandra’s Dream, In Bruges. Those films allowed me to reconnect, and that’s where I find myself now.”

It looks like it hasn’t been too much of a struggle for Farrell – a vague notion that he would agree with. For no reasons that he can think of, he says he just “fell into acting”. After he unsuccessfully auditioned for Boyzone, he attended acting school but dropped out when, in the late ‘90s, he was cast in the BBC drama Ballykissangel. Attractive features notwithstanding, Farrell’s acting skills developed quickly enough (a bit movie part here, a small theatre role there) for American talent scouts to come chasing. “I was not full of self-confidence,” he admits. “I was just on the journey of being an actor, and finding out what that meant to me personally, making a bit of a living, auditioning, getting call backs now and again.”

What would his ambitions have been at that point? “To work, to work, to work. As an actor, you understand very early on that you’re in a low percentile job for getting consistent work. That’s common knowledge, but that’s what I wanted to do. My childhood dreams of fame that I may have had – either as a footballer or a singer  – disappeared when I started acting. The practical thought every day was just to get work as an actor.”

But then American came calling? “Yeah! A fella came over from America and messed it all up! Brought me down a path that lead to massive financial success! Well… What really happened is the guy from America came over and asked me did I want to go over there for some meetings, and I said sure. The meetings were set up, and I went over to LA for a few weeks. And that was it.” Almost instantly, Farrell was cast in Tigerland, a low-key movie that nonetheless set Hollywood business tongues wagging about this “new Irish guy in town”. Following the generally positive reception to Tigerland, Farrell’s ducks, so to speak, lined up in a neat, long row. 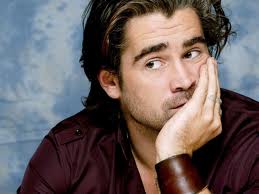 “I really benefited – or capitalised, if you like – from the work that was presented to me under certain elements of fear that exists in Hollywood of people not wanting to miss the boat. If they hear something is good, or big, or happening, they go, ‘Oh, man, give us with a meeting with these people, can we get a private screening?’, and so on. So a short time after Tigerland I started getting really major work. Shocked? God, yes, of course. I was going over to America to have a laugh – I was quite happy in Ireland, just acting and trying to figure out where I was going and how I’d get there.”

Which is pretty much where we came – except that along the way to his present state of Zen-like self-awareness (and through the fog of the wild years) Farrell is the father of two children: ten-year old James (with model Kim Bordenave) and two-year old Henry (with actress Alicja Bachleda-Curus, who co-starred with him in Ondine). He is also at a point in his career where he can slip and slide from big-budget (Total Recall) to low-budget (Seven Psychopaths, which reunites him with In Bruges’ director/writer Martin McDonagh).

It’s a good position to be in, creatively and financially, yet Farrell dispels the idea that he can do virtually anything he wants to. “There are very few actors who can stake a claim to that kind of position, and I wouldn’t be one of them. That said, I’m an actor who has a lot of choice in his life. I only realised fairly recently how ridiculously uncommon and privileged and decadent it is to have that level of choice. The majority of actors in the world that work – they don’t choose. They don’t go, ‘aah, the script isn’t speaking to me, or I’m not too sure I can do anything with the character!’

“As an actor, you audition for the job, you hope for the best, and if you get the part you ply your trade. Having such an amount of choice is, simultaneously, one of the great things about the position I’m in, and also one of the – and I say this with full awareness that it’s said in the voice of a spoiled man – burdens. It’s a burden because you have to factor in loads of possibilities. A film being successful is such a gamble; you have to put into the mix as many factors as you can – the directors, the genre of the movie, and all of that. For instance, I think what Total Recall might paint a picture of is an actor just having fun doing as many things as he can. I like different scales of film, different genres, trying to walk in as many shoes as I can.”

And the money helps, surely? “Let’s be honest – the money on Total Recall was fantastic, but if something in the script didn’t speak to me I honestly – honest to God – wouldn’t be able to take it just for the money. I wouldn’t – it’d crush me. Well, it wouldn’t crush me, but one of the great benefits for me, one of the most heightened privileges about what I do is that I get to do something that constantly keeps me curious, constantly provokes me, that I enjoy, and that I actually have fun doing. I’m very aware of how much money comes in, of course, and I’m lucky enough to have two beautiful sons with two different mothers. I’m fortunate to be doing very well, so, yes, the money for movies is lovely.”

It varies, of course, from movie to movie – the difference in pay cheques between Total Recall and Seven Psychopaths is massive, but that, explains Farrell, is for a reason. “One is something you can relate to and find something in the script that keeps you interested for a four month shoot, that is going to be a physical experience, but which you know is made for mass consumption. The other is completely for the heart and passion of it.” He isn’t saying, of course, but you can tell in a heartbeat which kind of movie Farrell likes best. What Farrell is doing, he is at casual, charming pains to point out, is chasing an idea. “You really are, and sometimes those ideas have been chased down the line and exploded into a thousand pieces, so you can never catch it.”

He then finger-combs his short head of hair and delivers a multi million-bucks smile. Inevitably, you can’t help but be impressed. The lounge, meanwhile, experiences a collective flutter and swoon. “But you try.”