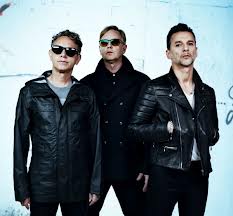 There are survivors and there are survivors. Travelling along the same time path and flightplan as U2, electro-pop pioneers Depeche Mode have come through the actual ravages of 35 years as a group reasonably intact.

A little history might be useful: skipping out of Basildon, Essex, in the late 70s as a quartet of working-class, cherub-faced teenagers – their songcraft sculpted by synthesizers rather than guitars, influenced by pop rather than post-punk – their first hits were bright synth-pop tunes, penned by original member Vince Clarke. In 1981, just after the release of their debut album (Speak and Spell), Clarke left to form Yazoo (with Alison Moyet) and then the more durable Erasure (with Andy Bell). Clarke’s departure left the door open for one of Depeche Mode’s heretofore hidden talents – Martin Gore.

Gore, a self-confessed pessimist, steered Depeche Mode in a completely different direction; the once perky songs were replaced by hitherto hidden darker-hued concerns:  strapped and bound hedonism, a distinct yearning for the Sub/Dom lifestyle, more than flirtatious hints of S&M. Come 1986 album, Black Celebration, the transformation was complete – Depeche Mode no longer comprised Essex boys on the razzle, but rather young men intent on having a seriously twisted time. In the midst of it was Gore, the shy teenager who had in the early 80s moved to Berlin (aha!) following a break-up with his devout Christian girlfriend. Cue nightclubs slightly more risqué than the high street Roxy, and a man unafraid to walk on stage in bondage gear. “I think this album was one of the easiest to make, and as far as I can remember it’s our first album to be finished ahead of schedule.” Despite having lived in Santa Barbara for the best part of 20 years, Gore has retained his Essex accent, as well as a kind of reticence or shyness that is more engaging than irritating. He is talking from Austin, Texas, for the promotional push for Depeche Mode’s 13th studio album, Delta Machine.

The album, however, is their first not to be released via Mute Records. While many may ponder exactly why being signed to a particular record label might be a good thing (shared ethos and cultural proclivities being but two reasons), there is nonetheless a concern that cleaving the bonds between a band and record label that nurtured (and creatively indulged) them might just affect some change in dynamics or creative direction. Not so, says Gore, who is quick to point out that although Mute label boss Daniel Miller (who first signed Depeche Mode over 30 years ago) is no longer in charge, he is still attached to the band’s collective hip.

“When I first played the album demos to the band and to Daniel, they all liked the direction of the sound, and they thought it gave us a good template for the subsequent recordings.” Gore goes on to explain that Depeche Mode first met Miller at the end of 1980, when they did a support slot for a band in a venue in the London hotspot of Canning Town. Miller was mixing the sound for the gig, and on following the band backstage instantly offered them a one-off deal for a single. It seems odd that the multi-million selling band, straying from Mute to Sony, didn’t want to have Miller removed from the picture. What precisely is Miller, then – the band’s lucky charm, their best friend? “We have him on board as a kind of consultant or mentor,” answers Gore. “I know that word has a very X Factor ring to it, so perhaps we should move swiftly on?”

Well, then, how about Miller being a sounding board and band consigliere? That’s more like it, avers Gore. “He has some very special qualities, and his A&R instincts are amazing. I know all of the producers we have worked with over the years listen to everything he says, because everything he says has a point to it. Usually, a label boss or A&R person pops into the studio and comments on things they know nothing about – they make ridiculous points and don’t really understand the music. Daniel isn’t a traditional musician, and he doesn’t necessarily understand chords, but he has a great feel for music.”

When you first met Miller over 30 years ago, I ask, what kind of ambitions or aims did Depeche Mode have? Were you up for world domination, or was playing as a support act as big as it got? Gore ponders before replying. “I suppose we were amazed that Daniel was offering a one-off single deal – because that was our ambition, we just weren’t thinking long-term then. The fact that we made it to our first album being released was, quite honestly, staggering.”

Gore says the game plan, as such, was to take things one step at a time. It’s always been that way, he continues – even with Delta Machine. Step one: write songs. Step two: record them. Step three: release the album. Step four: embark on a 16-month tour. Step five: take a break. “And after that maybe we’ll all get back together at some point and write the songs for the 14th studio album.”

Despite the rigorously upheld game plan, there’s no doubting the band’s survival instincts. Gore agrees that the band which hopped out of Basildon is radically different to the band, which, during one of their lengthier tours in the 90s, employed the services of both a psychiatrist and a drug dealer (the former was sent home before the latter, by the way). 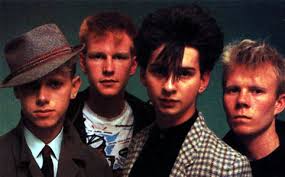 “Oh, yes, we were very different when Vince Clarke was at the helm – we were a pure electronic band, very pop. When Vince left we tried to change that – not instantly, but gradually. I’ll admit that some albums early on were quite unsuccessful attempts at being a bit weird yet at the same time wanting a pop edge. But we were finding our feet, I think, after the shock of Vince leaving. With Black Celebration, however, we finally found our path in music, and what we felt comfortable doing.”

Which is, essentially, fusing musings on religion, death and sex with industrial size, melody-driven electroshock treatments that have had the likes of Nine Inch Nails, Korn, Slipknot and many a Detroit techno producer pay their respects. These days, says Gore, there is a definite sense of clarity. It makes a change from the 10-year period (1986-1996) when the band were cruising to massive international success on a diet of booze, nervous breakdowns, hard drugs, seizures, booze, internal strife and hard drugs. “That seems such a long time ago now,” sighs Gore. “I mean, Dave [Gahan, lead singer] recently celebrated his 15th year of not touching either drink or drugs. I gave up drinking seven years ago, so that’s stuff you don’t think about anymore. Was I an idiot? Or just young? There’s an element of that, for sure. When you’re young you want to lead a more hedonistic lifestyle, don’t you? If you’re in this profession, you’re almost encouraged to live that kind of lifestyle. It’s probably the only job in the world where people actively encourage, and are happy to give you, drugs – and buy you alcohol. Everywhere you go people want to do that.”

But you and the other members of the band got out before it was too late, didn’t you? “Definitely. A lot of people worry – as I did at some point in my life – that if you give up drink, if you abandon the lifestyle, then maybe you won’t be as creative as you once were, but that’s a big urban myth. What actually happens is you have a lot more time and have a clearer head to think more, which means you’re bound to have a much larger output of work. That’s proven to be the case for me – I don’t think it would have been if I’d continued drinking.”

And Mute Records? Is it worth banging on about how important it can be for bands to sign to a label that reflects likes, dislikes, personalities? “There’s no question about that,” claims Gore. “Had we signed to some of the other major labels that were chasing us in the late ’70s/early ’80s, I’m sure we would have probably been dropped after our first album, and definitely after our second. We would not be here today, I’m certain of it.”

(This first appeared in The Irish Times/Ticket, March 2013.)