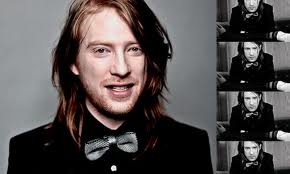 The first thing you notice about 30-year-old, six-feet-plus Irish actor Domhnaill Gleeson is the shock of unruly red hair that announces itself without so much as a beg-your-pardon. The second thing you notice is a certain casualness of demeanour that comes with not really noticing that members of the public are looking at you; and the third is just how much of a nice guy he is. He may be wearing Alexander McQueen threads (the price of which you really don’t want to know), but back in a high-ceilinged room at Dublin’s five-star Merrion Hotel, it’s off with the tops and on with the red striped t-shirt.

For someone so grounded, it will be a measure of his mettle as to how he engages with the response to his forthcoming movie, About Time. Gleeson has been a visible actor (as well as a director/writer of two well-received short films) for the best part of ten years, yet his film roles to date have been character parts, blink-and-you-miss-it parts or I-know-the-face-but-just-can’t-place-the-name parts. About Time will change all of that.

In a career first, Gleeson plays a leading role. Not only that, but it’s a leading role in a romcom directed and written by Richard Curtis (he of Four Weddings and a Funeral and Love Actually fame), and co-starring American actress, Rachel McAdams. To outside observers, About Time isn’t just another movie for Gleeson – it’s a game changer for him. He deflects such a notion in a typically self-deprecating manner: “I’m sure a bunch of more famous people were cast for it and refused it, so then I was offered it. If you’re honest with yourself that’s probably the way it happens a lot of the time.”

True enough, but you’d be hard pressed to come up with a shortlist of other actors, Irish or otherwise, that could – as Gleeson flawlessly manages to do throughout the movie – channel their inner English middle-class attributes without being in any way irritating or false. “In some ways it’s just another movie,” he says, initially guardedly, “because an actor needs to work, so that they can make a living and express themselves, and do all of those artsy things that actors talk about. That’s why most actors work. If anyone goes into acting in order to make piles of money then they’re probably an idiot. The reason you do it is to make something worthwhile that might stick around for longer than you live.”

So far, so good. On the other hand, however, Gleeson is cognisant of the fact that About Time is a bigger undertaking than many other movies he’s appeared in. He mentions a previous role in a big budget film (2012’s highly stylised Anna Karenina, which was directed by Joe Wright and which co-starred Keira Knightley) where he played a romantic figure. That was, he admits with a smile, quite different to his usual “tortured, killed, under huge physical, life-threatening pressure roles. So I felt that, if as an actor you could be in danger of your life, then why can’t you be in love? I also didn’t want to be the guy who was in drama roles all the time – I really wanted to see if I could do comedy.”

Such characteristics go back years. Domhnaill is, just in case you didn’t know, the son of acclaimed actor Brendan Gleeson, and – it could be argued – contracted the acting bug from a very early age. He recalls being on various television and movie sets as a child (“I remember there were free biscuits on the set of Braveheart!”) as well as enjoying his roles in secondary school productions of Grease and King Lear. He regards his Road to Damascus-like experience, however, as not occurring until his late teens, when he read the play Lieutenant of Inishmore, by playwright (and now also filmmaker) Martin McDonagh.

“Everything about that play was just amazing,” Gleeson enthuses. “Up to that point in my life it was the best thing I’d ever read, including novels. It was my all-time favourite thing; I’d be reading it on my way into college, and I just found it so funny – it made me laugh many times on every page.” In what was either fate or serendipity (or both, come to think of it), around the time that he was reading the play, McDonagh and theatre producers were holding auditions for a substantial part. Gleeson shakes his head – dislodging long strands of hair in doing so – at what happened next. “Amazingly, madly, I got the part, and so the first real acting job I had, at the age of 19, was in London’s West End. Very quickly from then, I realised that acting was what I wanted to do.”

Small roles followed, as did college (“I was unwilling to work until I got my degree”) and, perhaps crucially at that point in his life, calm advice from his parents. “When I was in college, they said to me that I should choose a career based around what I was interested in and not what I thought would make me the most money.” Of course, several years previously, Gleeson’s father had done exactly that by quitting his teaching job for a stab at full-time acting. “It was a risky move,” he admits, “but he and my mother realised that it was what he wanted to do, and if he was going to be happy, he had to give it a shot. I imagine that if things hadn’t gone as well as they did for him – and it wasn’t all good at the start, I know – then I’m sure he would have gone back to teaching; there is a certain amount of reality that impacts on decisions you make.”

On the subject of his famous father, Gleeson knows only too well that the virtues (and, in some cases – but not Gleeson’s – the sins) of the father can be laid at the feet of the son. “It’s possible some people do this, but I’ve never defined myself as ‘son of Brendan’. Or the fact of he being my father as something that held me back in any way. Everybody has to be known as something, and I’m as proud to be the son of my parents as I’m proud to be in a film that I hold in high regard. It’s never been an issue for me, to be honest.”

And what about his decision to choose acting as a risky career option – did his father ever try to dissuade him from entering the profession? “No,” is Gleeson’s succinct, polite answer. “My parents always supported what I wanted to do. Every now and again, however, you would be reminded that if you’re going to go into acting, then you’re going to have periods of time – possibly very lengthy – where you’re not working. That it can be a very difficult lifestyle, even if you’re successful at it; and that standing on a red carpet is merely one of approximately three times a year out of a very unglamorous schedule. Oh, and that you’ll be questioning your place in the world, that you’ll have to work very hard, and so on. But no, they were always really supportive, as I say, and the advice was given because they just wanted me to go into the business knowing the risks.”

If you get a sense of the person from the movie roles they choose, then we can safely say that Domhnaill Gleeson is in it for the quality of the work, that he’s exceptionally good at what he does, and that he has no time for the fame game or the culture of celebrity. That said, About Time has the words ‘massive hit’ stamped through it. Will it matter if Gleeson’s commercial profile goes skywards? “It matters if it impacts on your life,” he ponders. “It matters if it makes it difficult for you to have a pint in a pub with your friends. And it can matter in a way that might make casting directors choose you for a role that they otherwise would have passed you over for. Of course, I don’t have any idea as to what will happen when the movie is released, and in a way there’s no point worrying about things that you no control over. If it happens, then I’ll have to reassess. Fame having such an effect on you living your life is not nice, and in terms of it being something to aspire to, then no, I would follow my father’s lead on that, which is to say that it’s a load of bollocks.”

And with that, he shakes his mop of hair, laughs, stretches out his long legs, and awaits fame to confront him. Fame, you sense, is going to have a tough fight on its hands.