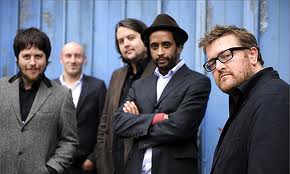 Not now, though. Indeed, not for almost ten years. Between 2005’s Leaders of the Free World, 2008’s Seldom Seen Kid and 2011’s Build a Rocket Boys!, the band from a small English town called Ramsbottom, near Bury, has become the opposite to anonymous: winners of the Mercury Music Prize in 2008 (for Seldom Seen Kid), a BRIT Award (Best British Group) in 2009, and – as part of, perhaps, of a scenario that they never could have foreseen – critics and crowd favourites for the kind of live shows that effortlessly blend waves of emotion and surges of chorus singing.

It is far from waves and surges that we find ourselves these days. We are in Salford, at Elbow’s very own rehearsal and recording studios, Blueprint. Here, amid stacks of guitars and all manner of recording equipment, books (including Bob Dylan’s Chronicles Volume One), we listen to the band’s forthcoming album, The Take Off and Landing of Everything (although on the day we chatted the working title of the record was Carry Her Carry Me), and prepare to talk to Guy Garvey, who has repaired to the band’s local pub, which is a mere minute’s stroll from Blueprint.

Their first studio album in three years, The Take Off and Landing of Everything is all you hoped it would be – it’s a record for people who hold the old-fashioned notion of an album being an album and not just a collection of random songs close to their hearts. It sweeps and soars in all the right places, it documents travails, troubles, trials and triumphs. So it’s a, er, journey, then?

Guy Garvey, a bearded, hefty figure in a souwester that doesn’t really look as if it has seen a lick of salt on either high or low seas, takes a sip of his pint, looks at me sideways and considers whether or not I’m being facetious. (Which, as it happens, I’m not.) “The easiest way to describe the new album,” he says, mulling over what’s to come next like an auld fella puffing on a pipe, “is how it differs from the previous one. When we were working on Build a Rocket Boys!, we very clearly wanted to deliver something that was sparse and reflective. We also wanted make a record that the fans would appreciate – not to necessarily build on the success of …Rocket Boys!. It was almost like we wanted to get one off the blocks very quickly so we could reassure people that we’re still about the music first and the success after.”

There was, reflects Garvey, a conscious effort to involve the group this time, and also to integrate something that he has long had a bee in his bonnet about: tempo change. He is right when he points out that the idea of slowing music down and speeding it up has been lost, dynamically at very least, because of the way it’s recorded. “It’s almost like music is being recorded these days in something approximating a grid system,” he posits, “purely for ease of editing. Tempo change is a valuable tool, as is volume dynamic.”

Between this and involving other members of the group in a more integral way, the album sees Elbow progress to a different level: just when you think the tempo changes reference a prog rock band you’d long since forgotten about (well, hello there, Greenslade!) along comes a rather nifty melody line and an even niftier chorus that are no closer to prog rock than Broadway show tunes. Alongside the valuable tools of tempo change and volume control are Garvey’s lyrics, which once again reflect a level of maturity, humour and emotional engagement so obviously missing from many of rock’s so-called ‘elder’ statesmen (of which Garvey, at the age of 40, is a recent addition). It is arguable, however, that anyone under the age of 30 won’t have a fig’s notion of what the word ‘woodbines’ means, isn’t it?

True, nods Garvey sagely, but nonetheless there’s a seriousness about the songs that befits the music. “The album title refers to various things having happened to the band over the past year or two,” he explains. “One of those was that my long term relationship finished, which, far from being your typical heartbreak situation, has actually turned into a very friendly thing – breaking up was the right thing for both of us, which sounds like a cliché but isn’t. So, on the album I’m trying to shine a light on the grey areas of relationships, in that life isn’t always like a soap opera. The perceived wisdom is that when a relationship ends, one person is heartbroken and the other person isn’t. But rather, in our case – and in many people’s experiences, I’d say – it can be a great expedition that just came to an end.”

Another element of work practice that energized proceedings was the wilful holding on to what Garvey enthusiastically terms the “energy of the first take”, the instinctual reasoning of knowing what sounds right. “For the first time we’ve kept certain aspects that arrived first. Usually, there’s an energy about first takes that you can’t recapture when you re-record again and again – ditto with the lyrics. So for the first time we’ve held on to those early attempts. I’ve also held on to the first draft of the lyrics, and – unusually – not revised or updated.”

There is a sense here of a band going back to basics, returning to that first flush of giddily engaging with the possibilities of songwriting. Back in the early 90s, of course, the landscape of the music industry was less rugged than it is now. According to Garvey, Elbow just about sneaked in before, as he says, “it all went pear-shaped.” He cites the signing of a particular kind of record deal and having “a long term manager that we trust as much as we trust each other” as being the two primary reasons as to why Elbow not only gained a foothold in industry terms but also continued apace on such a rocky road.

“These days,” he reasons, “you wouldn’t go into music management if you were interested in making money. It’s possible our manager has an exit strategy somewhere in the back of mind, but he should hold on because I think there’s never been a better time for music. You can make and release an album for very little from the comfort of your bedroom, if you so choose – and you can get it direct to the listener. That said, the kind of promotion we have enjoyed, and the kind of money labels used to put into bands in order to grow them – that has, pretty much, disappeared.”

And engaging with that level of reality for Elbow – for a band of your status what’s that like? Liberating? Frustrating? Garvey hums and haws, and takes a long sip of his pint, closes his eyes. He is clearly about to slip into some kind of reverie. Here we go…

“Well, when we started all those years ago, it was all about home taping is killing music, and then it was Internet piracy is killing music. It’s still a bugbear for me that some people just don’t buy music anymore. It’s okay for us – we’re fine in that regard, because we can survive on gig ticket sales, but it’s a crying shame for young bands whose members can’t quit their jobs because people listen to their music on the likes of Spotify rather than buying it. These guys can’t go and do it for a living – to me, that’s what really killing music. Another thing is something we’ve never questioned – that, for us, the art form we work towards all of the time is the album, not the live performance. Yes, of course we aim for great gigs all of the time, too, but ultimately, I think we make music for people who own speakers.”

It’s an odd thing to say in an era when most people listen to music via earphones the size of fingernails, but Garvey is one of contemporary rock music’s wise guys (as opposed to just a wiseguy), and a spokesperson for Elbow, one of contemporary rock music’s most considered, intelligent and broadly romantic bands. “Big soft lad?,” Garvey ponders for all of a second. “Yes, that’s me.”

As for the new album? Well, it’s a beaut, as well as a distinctive development (a little bit classic time-signature prog rock, a little bit archly emotional, a lotta glorious, sweeping melody) of Elbow’s ongoing development. “It has to be, doesn’t it?,” notes Garvey. “And it’s exploration, which, quite simply, is crucial to us – that and wanting to mix things up a bit, to make the working dynamic just that little bit different. Keep the process interesting and love the results? Oh, yes, that’s our motto. Now, are you gonna have a pint, or what?”