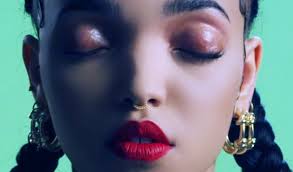 That’s twigs with a lower case ‘t’, to you, mate. Yes, people, we’re in the potential danger zone of being as pretentious as the next arty Big Thing, but when you have a chat with fka twigs (the woman formerly known as Tahliah Barnett) you come to the conclusion fairly quickly that she’s as normal as the rest of us. Well, she would be if she weren’t so damned talented.

The 26-year-old musician and former dancer (the more eagle-eyed amongst you may have seen her, some years ago, busting rather vigorous if lithe moves behind the likes of Kylie, Cheryl Cole and Jessie J, notably so in the latter’s videos for Do It Like a Dude and Price Tag) has see her profile rise so much over the past nine months that she has had to retreat from feverish media onslaught in order to calmly prepare for the release of her debut album, LP1.

Such attention hasn’t been influenced by the kind of overnight sensation nonsense that often rides shotgun with certain pop stars – twigs has been biding her time for a few years now, having gained discerning notice from July 2012, when she dropped the controversial and remarkably singular video for Hide, a track from her debut release, EP1. A year later came EP2 and another even more controversial video for the song Papi Pacify. We’ll get to the videos later – right now, twigs would like to talk about LP1.

And why ever not? It’s quite the best earworm blend of trip-hop, electro-pop and deep electronica you’ll hear this year – not for nothing has her music been aptly described as ‘R&Bjork’. Music aside, there’s also something extra special about the lyrics, which tell it like it is in areas such as love, lust, insecurity, paranoia, obsessiveness and sexuality. Thematic home truths and sonic hybrids – were they something she consciously set out to deliver?

“I wanted to be very honest about how I was feeling,” says twigs in a gentle tone that, to the uninitiated might belie the strength of her convictions. “And to have all of the decisions I made about what went into the making of the record true and uncompromised. That thing about not compromising is important to me, not only as a creative type but also as a person. The thing is, I like to tell the truth all of the time, I like to be honest all of the time, so that was my main objective.”

She is certainly that with her words; curiously, for such a visually assertive performer, she admits that the sense of insecurity some people have picked up on in her songs is very much present and correct. “That’s a fair point,” she reasons. “Why? Over the past 18 months I’ve been as insecure as I’ve ever been, which is ironic because I’m with a wonderful record label, I’ve worked with amazing people, and I know I’ve made a really strong album. Then there are all of the magazines that have wanted to photograph me. You’d think with all of this I’d have massive amounts of confidence, but no.”

The new album, outlines twigs, was a process (“as a person, not as an artist”) of overcoming her own vulnerabilities; of proving to herself that she could do something bold and brave. “And that I could relay a vision of what I wanted into something real. All of that was done very much on my own, despite there being people trying to sway me, or to inflict their thoughts and opinions on me. All this stuff – what was right, what I should do, what was wrong – was delivered by people who thought they knew me, but no one knows you so well as yourself.”

The singer pauses for breath, reigning in apparent annoyance. “And that meant I had to stop listening to people who had slight problems with the way a song sounded, the way the lyrics scanned, the way a video looked. Coming up against these things, resisting them, over the past 18 months was, I think, the time when I finally became an adult.”

One is careful not to read too much between the lines and the pauses here, but we’re guesstimating that twigs is referring to the aforementioned two videos, Hide and Papi Pacify. A quick précis might be relevant. Each video is highly stylized but beautifully simplistic: Hide (co-directed by twigs and stylist Grace Ladoja) largely lingers on a woman’s crotch covered by a red Anthurium flower, the priapic stamen of which is continually caressed by a hand. Papi Pacify (co-directed by twigs and Tom Beard), meanwhile, artfully pivots around the faces of a man and a woman in what appears to be a 50 Shades of Grey scenario as executed by Robert Mapplethorpe. There’s a laugh from twigs at this one.

“Yes, well…” Another laugh, quieter this time. “Let’s face it, no boyfriend wants to see their girlfriend in a video with a big, handsome black dude feeding his fingers into her mouth, do they? But that concept is my expression, and boyfriends have to deal with that, don’t they?”

They do, indeed, but twigs is about to recall how that particular video caused what she politely describes as ructions between her and her (then) boyfriend. “He said why did I have to do the video that way? That it was disgusting, that there was nothing beautiful about it. I told him that was how I wanted to express myself, that it was how I felt, that the concept was what I wanted it to be, and that it had to be the way it was. It’s all about being true to myself, I remember telling him. He said I was just a silly pop star.” We can almost hear the hackles rise across the phone line. “Yes, well, hhmmm. Those kinds of people want you to be successful but only on their terms, never on mine. Bye, bye, chill out, bye, bye, mister…”

Expressions of sexuality aren’t always so easily explained, twigs points out. Throughout Papi Pacify, she details, all you really see are people putting fingers in mouths. “Is that so shocking? Is it such a big deal?” Her irritation is well placed. “When some people say to me that I’m trying to provoke, I reply, right, so you’ve never had your partner’s fingers in your mouth at some point? I know they have, man! Is that more unusual than seeing a pop video of a young girl, who doesn’t understand anything about her sexuality, cavorting down the street. Isn’t that provocative in a more obvious way?” Does she think about the consequences of such videos, whatever way the visual content might be viewed? “Nah – I just do it, and it gets done.”

Getting it done, getting it dusted, getting it right. Negotiating the paths between pop star and art, cover star and pretence, can be tricky. There’s little doubt that twigs could be most things to most people, but there’s a strong sense trickling from her that she’s not as malleable as some people think. She knows, for instance, that all the love and air kisses the glossy mags and websites are throwing her way won’t last.

“Music comes first. There has to be a reason why I’m in these publications, and the reason is the album. In months to come, if a magazine approaches me to be included in the 10 Most Stylish Females of 2014, and they want me to be Number 7, and to talk about what gels I use, then no, I don’t think so! That’s stupid…”

It’s not about looking cute, says the sensible woman who spent an entire music video with a guy’s fingers in and out of her mouth. “The fashion shoots are fun now, because I’m 26, but I want a long career. When I’m in my 30s, I might choose not to use make-up anymore, to be a football mum, to wear chinos, flat shoes, shave off my hair, tend to my garden. You know, when I’m not looking so cute. Ultimately, I want people to care about the music, to care about what I’m saying.”

(This first appeared in The Irish Times/The Ticket, August 2014.)