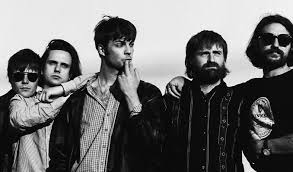 As feasible manifestos go, it would seem that Fontaines D.C. have got it right: “A minimalist approach was there from the start: three chords, backbeat, don’t say anything at all. Play the songs, and let them speak for us.”

There are in rock music many different stylistic strands yet, evidently, only two methods of performing. The first is a mix of jazz hands, big mouths, brightly coloured clothes, and an onstage presence that we can confidently describe as ‘entertaining’. The second, and arguably more circumspect, is what seems to be a sullen display of bad manners but is, more often than not, a serious attempt at reining in the uber-personality. That’s what Fontaines D.C. are all about – all killer, no filler. Egalitarianism, sensible self-image, realistic self-worth.

During the years, we have seen too many bands and musicians lose the run of themselves at the sight of a positive review, but not these Dublin-based musicians. While the response to their live shows over the past 18 months – as well as reaction to their recently released debut album, Dogrel – has bordered on the rapturous, there is a sense that Fontaines D.C. are taking it all in their stride. Such an approach makes perfect sense, yet one can’t doubt that their lives have been twisted sideways with the speed of their success in the past 12 months. Although they’ve been a band for five years, it is only in the past three that their music has graduated from small rehearsal rooms to grander stages. The last year, meanwhile, has seen the band rapidly progress from Ireland-only favourites to likely international chosen ones. That marked progression of profile – how have they processed this? It hasn’t been easy, they admit.

Gathered around a table in a gentrified building in Dublin’s Liberties – in part, the vivid geographic genesis of the songs that populate their equally characterful debut album – three members of the band chat about their early days and where-to-next timeframes. But first, the present workload, and how the shift from obscurity to cover stars (how they would laugh at this description) has proven to be challenging.

“Yeah, it’s difficult to ignore,” says bass player Deego (aka Conor Deegan III) of the barrage of adulation directed towards the band. “It affects the ego, good and bad. You get sleep deprived, you lose touch with loads of friends because you don’t see them.”

“The positives are that we get to travel and see so many places we would never have had the means to see otherwise,” remarks guitarist Curley (aka Conor Curley). “But having that conversation with your peers about aspects of the hard work is difficult, because as a band we know it isn’t what they think or presume it is. It isn’t the dream come true, because we work like dogs.”

“I’ve spent more hours awake this year in a van than I have in my own house,” points out guitarist Carlos O’Connell. “It isn’t at all glamorous, but once you become used to it you start to live within those restrictions in the best way you can.”

All of the five band members (missing from the round table conversation are vocalist Grian Chatten and drummer Tom Coll) met at Liberties-based music college BIMM Dublin several years ago. Not all finished their courses, but each knew a good thing when they encountered it: the company of like-minded people that had more in their heads than lopsided ideas about what success really meant. Several things solidified their fixed friendship: a love of literature and poetry, an unquenchable desire to discover music they hadn’t heard before, an unaffected process in creating art, and a collective selflessness that stripped away any notions of ego. Alongside these was a shared obsessive nature that glued it all together.

“The friendship was there from the start,” notes Curley. “We had all started with an idea and were excited about playing music. We were also all in it at the same time, and that development brought us closer very quickly. The first rehearsal we had probably sounded awful, but we came out of the room feeling incredible. After that, we’d stay up late talking about songs that we were either working on or we had heard. There was an incredible excitement about the whole thing.”

The band’s self-confessed “punk-Beatles” starting-off point developed quickly enough into a three-chord amalgam of New York-influenced post-punk. They were, they admit, “probably a lot more ready-steady-go, plug-in and play”, whereas now “we labour a bit more over the various sounds and how we want to come across instead of being, sonically, a flash-in-the-pan.”

With Dogrel unanimously established as one of the finest albums of 2019 (from any band of any nationality), the musicians feel there’s little point in further discussing its merits and its inspirations. They are, frankly, weary of the media’s all-too inevitable echo chamber effect. “That occurs when you say something about certain things [on the album] that people find vaguely interesting,” says Deego, “but then everyone starts repeating it. It’s good that people have something to say about us, for sure, but the whole ‘lads that like writing music and reading books of poetry’ got blown out of all proportion.” Curley, as deadpan as Buster Keaton’s face, throws in an observation that makes all of us laugh: “It isn’t really extraordinary that we read.”

The discourse, too, about Dogrel’s stimuli, its illuminating range of characters, its vernacular, and its vital, oral sketches of ‘Dublin in the rain…’ has been chewed over ad finitum and ceremoniously spat out, says Carlos. The vibe we feel is that if one more question is asked about it they’ll answer politely while simultaneously stifling a big fat yawn. “Months have passed,” Carlos continues, “and while the album isn’t by any means dead if anyone wants to know what it is about then they’ll just have to listen to it and find out.”

This is only right and proper. Onwards is the uninhibited battle cry for this most articulate of bands, and so for most of the summer – with some festival shows as buffers – they will be sequestered in Dublin writing new songs. Unusually for any music act with such a multi-textured debut album, there is no impression whatsoever that they will stick to any given pattern. Anything and everything is up for grabs. “You have to call it,” states Carlos, revealing a brusque, dogmatic frame of mind. “Do you want to write an album that you know people will like because they’ve liked previous songs of yours that are written in a certain fashion? Or do you want an album comprising songs we just continue to write – different-sounding songs, perhaps?” The question is pointedly rhetorical. “We know that the next album can be whatever we want it to be,” Carlos concludes, “and that’s the very best position we can be in as artists.”

Why so? The game/set/match reply: “Because no one expects the next album to be anything other than us as a band.”