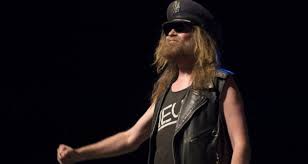 So which Julian Cope do you remember? The pop star Cope of Teardrop Explodes, the Liverpool post-punk band that enlivened Top of the Pops with reassuringly left-of-centre gems such as Treason and Reward? The solo Cope wrapped around a gravity-defying mic stand-cum-lectern as he crooned his solo hits, World Shut your Mouth and Trampolene? Or, most latterly, the erudite Cope, the modern chronicler of Japanese rock music, krautrock and prog rock? To these add yet another: debut novelist.

But first, knowing that he’s speaking to someone from Ireland, Cope wants to know where I live. I tell him that I live a few miles from Tara and Newgrange in County Meath. Not for nothing has Cope been termed the modern antiquarian (one of his thoroughly researched works of non-fiction is The Megalithic European, an acclaimed travelogue documenting over 300 prehistoric sites in mainland Europe). He becomes noticeably giddy. “That’s my middle world, man! In that case, may I say” – and this is intoned as if I’m on the receiving end of a knighthood from King Arthur himself – “greetings from Avebury!”

Julian Cope is a bona fide maverick, a cult artist’s cult artist, yet his appearance (heavy duty biker chic, accompanied by very long hair and a fulsome bird-hosting beard) totally belies his considerable charm and Matrix-like intelligence. He lives in what he describes as “quite a posh house” a short distance from Stonehenge, with his “ladies” – wife Dorian, and daughters Albany and Avalon. Adorning the walls are books, books and more books. It comes as no surprise to learn that the Cope family is not in possession of a television. “The TV licence people just can’t believe we don’t have a television. I’m a bolshy git – I shout at them things like, ‘I don’t need TV, I’m an intellectual!’”

Cope’s debut novel, One Three One, is subtitled ‘a time shifting Gnostic hooligan road novel’, and by Merlin’s lengthy beard it is exactly that. Think Beckett on a bender with bursts of surrealism thrown in for good measure. Stuffed to the rafters with incidents, accidents and downright brilliance, it is a treasure trove of weird. Following decades of writing non-fiction, was a work of fiction inevitable? “My wife thinks it was because of the worldview foisted on someone like me who travels so much. It didn’t really occur to me to write a work of fiction, but as time passed I had so many stories gathered that I wanted to tell.” Were the stories fictionalised in order to protect the innocent or the guilty? Cope barks out a laugh. “Very much the latter, although I’m not sure how much concealer I’ve put on!”

Born in Wales 56 years ago to parents “who were working class people that desperately wanted to be middle class”, and lumbered with “this flowery name and this pseudo-posh voice”, Cope moved to Liverpool for teacher training school in the late 70s, but abandoned it for a spell as a self-confessed drug-addled pop star. He has long since left his pop star days behind, and only occasionally partakes in drug taking – most recently imbibing the Mexican psychoactive plant, salvia, in order to assist his understanding of the time-travelling aspects that feature in One Three One.

The differences between writing a work of fiction and non-fiction – did he determine any obvious challenges between one and the other? He mentions his staggering obscure music review work of a couple of years ago, Copependium (Faber & Faber), as a reference.

“That book was written over ten years, and because it was written without any commercial restraints whatsoever, it meant that some of the reviews in the book are beyond borderline fictitious. In the review, say, of Comets On Fire’s second album, Field Recordings from the Sun, I write at the end of the review that the band’s lead singer dies, as well as the guitarist. So really, I was probably on the way there to smearing the truth.

“Luckily, however, I’ve created trust in my readers, with works like Megalithic European and Modern Antiquarian. People need to know that if I say turn left then I mean that; if I say that the stonework is 17ft tall, then I mean that. It’s that Robert Graves thing – there’s a poetic truth to certain things, so as long as I’ve fulfilled my obligation not to send people to the wrong hillside then I’m good. Once I got into the edginess of record reviews, then I knew I could stumble into fiction.”

Cope views his debut novel as a portal into newer creative areas. For far too long, he knows, he has been viewed as an outsider, something that the novel will hopefully put an end to. “The most important thing is that the book has received a very positive response,” he says. “I’m very receptive to positive responses for this book because it means I’ve not yet fallen so far out of society that I’m only entertaining myself.”

“I’ve a very peculiar literary agent,” Cope continues, apropos of not much. “My old publisher, Harper Collins, directed him my way, because I was such a pain in the arse for them. They said normally we don’t do this, but you really need an agent so that we can deal with the agent and not with you! So my guy works only with singular people – the likes of Michael Palin, Clive James, Ray Mears, myself – and what I loved was that when he read One Three One, he said it was a good job he had also read Dante and Cervantes. He also noted that, whether I was doing it on purpose or not, I had a disdain for literary heritage.”

Disdain or not (it seems more a necessity to gleefully play with the form) Cope reckons that with One Three One, he’ll be serving – at the age of 56, no less – a new and different kind of apprenticeship. “I think it’s good for an artist to renew their vows, so to speak.”

And there’s still music to contend with, as Cope reveals he’s presently writing a drinking song cycle. One of the songs, he reveals, takes place in Liverpool; another is located in the Outer Hebrides. Three, he says, are Irish-related. “One of the Irish songs is called Clonakilty As Charged. Based on my recently upgraded visionary drinking habits, it’s a righteously singalong tune! Mind you, they’re all very catchy…”