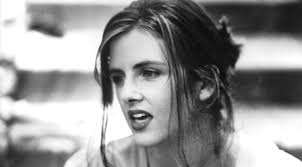 What a contradiction Maria McKee is: she exudes the type of laidback hippy chick demeanour that went out of style the day after Woodstock packed up, yet she’s no sooner sitting down at a table in a very posh Dublin hotel lounge – where customers are talking in little more than whispers – when she refuses to comply with a polite and reasonable request to move to a smaller table. Her intransigence and assertiveness would be admirable if it weren’t for the fact that McKee appears to be deliberately obstinate for no apparent good reason. We are a short way into our conversation when she calls over to her husband, a quiet American named Jim, with the following: “HEY JIM – HE JUST ASKED ME AM I DRAMATIC. WADDYA THINK?”

Faces crane around to see where the voice is coming from; Jim demurs, says no in a way (“er, noooooo…”) that clearly means yes, and I finally decide that if you plan to walk around Maria McKee you’d best bring along a metal detector for all those hidden landmines. In fairness, McKee is currently in a state of flux: she is promoting a new album, High Dive, her first for seven years, which has no major label backing. While the positives of this (complete artistic control, ownership of copyright, no record company executive looking over her shoulder wondering why they don’t hear a hit single) seem to outweigh the negatives (barely enough money for a financial glance, let alone a push; ditto for promotion), McKee is at loggerheads with the change of status.

“It’s exhilarating when it comes to making the music,” she says, all the while working at folding and unfolding a piece of paper, which she continues with until the interview ends, “but putting the album out on our own has been an extraordinary challenge. There were times when we felt we were banging our heads against the wall.” Despite her independent standing, she knows she can’t take her work to the next level until she once again has large-ish financial guns shooting behind her. The people who come to her gigs know her name, she admits, but she’s preaching to the converted and needs to reach a wider audience.

“It’s great to go away and come back seven years later and still be playing to people, but the show has gotten bigger, grander, it needs more space. I’m at the point now where if my audience doesn’t expand I may not continue because I’m feeling constrained. The trick is figuring out how to go about achieving the balance. What do you do – keep making record after record?” McKee says she finds touring a bind and a burden. It’s fine for a month or two, travelling in a van playing one-nighters and staying in small hotels, but after a while she loses if not interest then certainly stamina. She needs, she says, “lucky breaks, a soundtrack maybe, an opening slot with a big band, word of mouth, the Internet…”

Ironically, her big break came with a song from a soundtrack – Show Me Heaven from the Tom Cruise movie Days Of Thunder. Although not a hit in the US, the song – wholly unrepresentative from her repertoire, but one of those power ballads you still hear on daytime radio – afforded McKee a level of success in Europe that one suspects she sorely misses.

Born in Los Angeles in 1964, McKee’s half-brother was Bryan Maclean, a member of Love, one of the most acclaimed US rock groups of the ’60s. Influenced by Love’s baroque’n’roll as much as by theatre, Bruce Springsteen, nascent Americana and punk rock, in her late teens McKee formed Lone Justice and rode a wave of success enhanced by the patronage of U2, Bob Dylan and Tom Petty. Breaking the band up in 1987, she forged a solo career whilst living in Ireland, signing a deal and releasing three albums between 1989 and 1996. She considers Ireland to be her second home and spends as much time here as her schedule will allow. She didn’t intend to leave, she says; she returned to LA to record an album and “just got back into the swing of things there.”

Contradictions run through her life like blood through veins. While her roots run quite deep in California – she’s fifth generation, and lives in the house her grandmother bought in 1938 – she says she lives like a gypsy; even her roots are transitory, she explains, as both she and her husband love to travel. “I’m kind of like an itchy soul: when I’m home I want to be away. When I’m away I want to home, and so on.” When she tells me she’s remarkably needy when it comes to routine, my eyebrows form a quizzical arch that asks what might be at the core of her sense of dissatisfaction. Eventually, she comes clean: she suffers from mood disorders and if she doesn’t have a strict routine she gets “into trouble. The weather has something to do with it, too, I need a stable weather pattern…

“It’s very difficult for some people,” she says very quietly, the piece of paper still being worked on with her fingers. “I’ve learned to try to curb my impulses as much as possible so that I don’t hurt people, but there are some things that never change, and I am who I am. I suppose I’m not the easiest person to be married to. Jim is very patient. I need patience and understanding… There have been some people I have alienated along the way. It takes a lot of love for people to stick around me. There’s a lot of good, but you have to really navigate your way…”

Admitting there are horror stories about her within the music industry, McKee says those days are over. One wonders, however. She admits to there being conflict on the current tour between her and the young road crew (“that’s been an issue…”) and that the art of songwriting is difficult for her: “It’s hell, mysterious, there’s no formula I follow; I’m not a craftsman, I don’t go to the piano every day. I wish I were but I’m not. I admire my favourite songwriters’ almost mathematical approach, but that’s not me. I like to keep a flawed element to the songwriting because it allows for an emotional trail.”

She has lots of plans for future work, despite her earlier comments on the possibility of not continuing. “Musically, I’m more ambitious than anyone I know. I have specific goals, however; I don’t want to be a huge rock star and I don’t want to make huge amounts of money because that’s the enemy of art. But I’d love to make enough money to make art and to do it comfortably, but not so comfortably that it takes an edge away.”

Is there anything she would like to change about her life? She seems a curious, mercurial kind of person, I suggest – her head is above water, but other parts of her body seem to be immersed in something else. She agrees. “I’d like to find the balance between being an incredibly dynamic artist and yet as a person learn how to think about how my impulses affect others. It’s gotten a lot better as I’ve gotten older, but there’s some way to go. I’m still I’m not a walk in the park.”