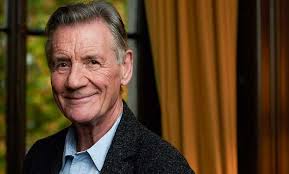 “I’ve been to many places in the world where I am not recognised.” Surely not? After all, we are talking with Michael Palin, an Englishman in his late 60s who has had more than one bite of a cherry that is singularly known as “fame”. First, there was his integral role as part of the famously influential comedy writing group Monty Python; then, there came his second wind, so to speak, as a travel writer and documentarian. For the past 40 years, his face has regularly been on our television screens, and in the past ten years, what with the advent of global satellite television and the syndication of his many travel documentaries, his face and voice have come to represent the kind of good-natured, cheery and rather sage Everyman that so many of us aspire to but rarely if ever achieve.

“China, for instance,” Palin continues, initially sounding not unlike one of his Monty Python characters. He is speaking by phone from his London home, where, he says, we might be interrupted by the arrival of a plumber. His wife, Helen, normally sees to these kinds of domestic matters, he mutters, but she’s at the gym, so… “There are, believe it or not, a few billion people that have never heard of me. Oddly enough, I’ve been in India a few times, and have felt rather comfortable there because people don’t know who I am, either, which means I can go around without being the centre of attraction, and actually watch the place, which I love to do. I think, though, that some of my television programmes are getting through there now, so the recognition factor depends on where they are shown around the world, and where the travel books are known and sold. There are countries, such as Poland, that are becoming so much more aware of me. In some countries, then, I’m better known, in others I remain blissfully anonymous.”

Being nabbed by an unsuspecting tourist or a curious native goes with the territory of being a famous face. Palin is astute and aware enough to realise that if one of his programmes goes out in a particular country, and he’s not recognised after it has been broadcast, then it could mean that no one watched it. “I have to remember that as it’s important. In England and Ireland, I just have to walk through a town or city and everyone seems to know me, so that seems to be a sign that people see and enjoy the programmes, and I can’t complain about that one bit. When I’m actually working, travelling, and trying to get the impression of a place, taking the temperature of it, see it without seeing me, then it becomes a bit of a problem to be overly recognised. You know, you’re sitting down in a café with your notebook and someone will come up and say, ‘oh, hello fancy seeing you here’. Immediately, you’re limited to what you can see and look at. So, as a traveller, I prefer being the observer rather than the observed.”

Things have changed, of course, from 40 years ago, when Palin, as a member of Monty Python – the ensemble comedy writing/acting team that unwittingly changed the face of comedy – was best known in the UK and Ireland for groundbreaking comedy sketches involving dead parrots, the criminal Piranha brothers (“vicious but fair”) and the Spanish Inquisition (“nobody expects!”). These days, he finds that different generations, who would once have known him for specific elements of his career, are aware of him for pretty much everything he has done.

“I’m constantly surprised,” he admits, “at the geographical spread of recognition. I remember I was once on an island in the Pacific, Little Diomede Island, the most extreme north-westerly possession of America. It’s cut off from civilisation for half the year, Inuit people live there, and they have a satellite dish, and as we were leaving one of them asked was I the guy from Monty Python and the Holy Grail? They’d seen it on satellite the week before, which was a coincidence, but I think to be recognised on such a remote place is amazing.”

Does the cultural legacy of Monty Python weigh lightly or heavily on his shoulders? Putting the short-lived television series and its cinematic offshoots into context, it really was a catalyst of change for subsequent generations of comedy writers, wasn’t it? “I’m very pleased that people remember Monty Python with such affection, and that it still engages and gets such a reaction today. When it first came out in the 1960s, the BBC protected us from a young audience by putting us out late at night. Gradually, over the years, a young audience opened up to us, and that is now well established. For me, I’m rather pleased they still enjoy it because it shows they have the same kind of attitudes that we had at the time, which, essentially, is that the world is an absurd place doing lots of silly things, and it’s good to laugh at ourselves as well as others. To my way of thinking, a little spirit of subversiveness when you’re growing up is quite healthy. It’s an important part of life and is, perhaps, better if it’s directed towards humour than jumping in fountains in foreign cities.”

When he views the legacy of Monty Python from a distance, does he judge it as a culturally significant entity or was it just he and his friends randomly throwing together jokes and sketches? “When we put it together,” he explains, “it was a self-conscious attempt to create a new form of humour. We certainly wanted to create a new way of projecting that humour, and the way it was put together was very different from what took place before – you know, the way every sketch had to have a proper punch line. We had a very disparate method – sketches sometimes began at the end or in the middle; we once ran the end credits at the start, and on one occasion we had the television actually switch off in the middle of a show. The BBC got very upset about that!

“What you could say is that Monty Python took quite a lot of risks at the time, that it was put together by six people who had a completely unproven belief in their own ability to write comedy shows. We were quite arrogant in our way, but we were given a certain amount of freedom to make the shows the way we wanted to make them. I’m not so sure that it would be the same these days. Now, something like Monty Python would have to prove itself, audition itself, have market research undertaken, and so on. We put out about 20 shows before the BBC came in with any attempt to censor what we were putting out. Which is quite remarkable when you think of it.”

Palin is no stranger to Ireland; his roots to the country go back to his great grandfather, Oxford don, Edward Palin, who married an Irish woman. In one of his 1990s BBC documentaries, Derry To Kerry, Palin attempts to trace his family line. It turned out that his great-grandmother was called Brita Gallagher, and was from (possibly, says Palin) the Donegal area. “I couldn’t find any final details, unfortunately, but Ireland is very much part of my roots and I’m very proud of it. I’d been to Ireland quite a few times before that documentary, though; the first was on my honeymoon in the mid-’60s. We honeymooned in Dublin, then went down to Tralee and then up around the West coast. It’s such a beautiful country, but on our honeymoon, I have to say, it rained almost continuously for four days. We were just married, though, so we went to bed very early! But the Ring of Kerry is indisputably beautiful. I’ve been back many times travelling all over the island. It has a certain attractive feel to it for someone who comes from London. I like the Irish attitude to life – lots of jokes, and I always get into a conversation with someone. They have time to talk, and the conversations don’t necessarily have to have a purpose, it’s just people engaging with each other.”

It’s easy enough to start detailing the rich, resonant life of Michael Palin, but where to stop? One of the best comedy writers of the past 40 years? Yes. One of the best travel writers and documentary makers of the past 30? Undoubtedly. President of the Royal Geographical Society? Correct. Does he have an asteroid named after him? You bet (it’s titled ‘Asteroid 9621 michaelpalin’). One of the most recognised people on Planet Earth? Definitely. A helluva nice guy who lives a genuinely interesting life? Spot on.

And yet we have to ask: on a scale of one to ten, how has his life been, so far? Palin’s answer is swift and to the point. “It’s been absolutely amazing. I feel as happy now as I’ve ever felt. I’ve been extremely fortunate throughout my life in that I’ve met people – whether it’s the Monty Python crew or television/film producers who had faith in me – who have pushed me into doing things that I might not have done myself, and managed to bring out what talent I have for observation and comedy writing. I hope I continue to be fully engaged. I also don’t feel quite so worried about the competitive side of doing better than others, and all of that sort of bother, which preoccupies you in your 20s, 30s and 40s. I feel like I’ve gone through that, and if I had to stop now for whatever reason I wouldn’t be dissatisfied at all with what I’ve done in the past.”

We hear a doorbell ring. The plumber has finally arrived. “But I do want to go on,” Palin concludes, “and touch wood I’m in pretty good shape to carry on travelling, thinking, seeing things and getting excited about them.”