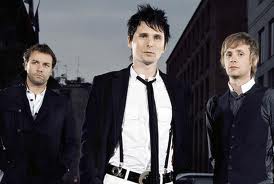 Matt Bellamy’s dressing room backstage. It is hotter than a very hot summer’s day, and the petite, voluble singer of Muse is sitting on a sofa, beside which resides a piano. Bellamy likes to have some time before a concert to go through some practice runs; he is a self-taught musician (he also plays improbably ornate guitar), and as a teenager had a twin obsession with Nirvana’s Nevermind album and a piece of classical music by Hector Berlioz – Grande Messe Des Morts. When Berlioz received the commission he commented that his brain felt it would explode with the sheer pressure of all the ideas he had in mind for the piece. Bellamy wants Muse’s music to be of similar intensity. Music, he once explained, “to be able to make you get on a plane and not be afraid of crashing.”

“Music is something I can’t live without, it’s a very natural language to me,” says Bellamy. You could say it runs in the family – his father, George, was a member of 1960s pop group The Tornados, short-lived purveyors of cheesy if somewhat prescient instrumental hits such as Telstar and Globetrotter. “I find that certain things you can communicate through music are not really easily communicated in any other way. First and foremost, then, it’s in the feeling of the songs – the very nature of them is something that cannot be reduced down to simplistic descriptions.”

Bellamy’s words almost tumble over each other, such is the speed at which he speaks. He is clearly a man with many things on his mind. “Whenever you express yourself in any way, it’s in terms of the personal, the world around you, the past and the future. All of these different things I’m finding ways to express through music. In the beginning of the band, it was perhaps limited to certain things, but as we’re developing I’m able to express different things. You could strip it down to hopes and fears about certain issues, but there are definitely some personal elements creeping into the songs – some are not so grandiose. On other songs I’m definitely pitching in what it feels like to be me, my age and me in this world. The process of doing it is very pleasurable and the impact it has is a bonus; the procedure of doing it, however, is the main driving force as opposed to the reaction we get back.” The moments Bellamy feels the reaction the most is when Muse are on stage – reviews are ultimately insignificant. In the context of a concert it’s about something that is quite unique. “The feeling we get from live shows is one of the primary things that keeps us going.”

Bellamy and his two band mates – bassist Chris Wolstenholme and drummer Dominic Howard – formed at Teignmouth Community College when they were in their mid-teens. Instantly bonding due to their ‘blow-in’ status (their respective parents moved to the seaside Devon town from other places in the UK), they remain close knit and are, perhaps, the epitome of how good it is for musicians to know each other as childhood or teenage friends first. If this gives Bellamy an edge in the natural-leader stakes, then it’s something the other quieter musicians seem not to mind. He might be the most obvious talking head in Muse, but it’s clear that the band’s ideas (a mind boggling number, all of which seem to revolve around sci-fi, technology, the man-machine interface and the love/loss equation) are communal.

The rise of Muse has been a steady upward curve. From their 1999 debut Showbiz onwards, they have successfully transcended their initial blatant influences (Radiohead, Jeff Buckley) to become a sleek if somewhat grandiose rock act. They are largely anonymous and private individuals who have not bothered the tabloids with late night drunken revelry and other pap-snapping tittle-tattle.

“We can enjoy our time off from the touring life,” says Bellamy, “without being bogged down by media exposure. In the past I definitely wasn’t ready for the media spotlight, and indeed it’s something I’m still not into. We’ve been quite careful to keep a low profile and have made sure we’re known for music rather than anything else. That decision was mostly natural, although there have been a few moments where you get asked certain questions and get led down certain paths to give a type of answer. But then we always wanted to gain popularity through music – it was never through wanting to be famous or being recognised in the streets.” In other words, it’s great to play in front of big crowds, but he wouldn’t want even a tiny portion of that crowd to be chasing him home? “Exactly.”

It’s a long way from Bellamy’s former job as a painter and decorator (His top tip? It’s all about the preparation – get out the silicone and seal those holes). In terms of songwriting, he suggests, it’s far better that he is not distracted by some of the other elements that one associates with fame. Is it a problem maintaining a level of modesty and maturity within the rock’n’roll on-tour lifestyle? “We have a natural healthy cynicism about the music industry, and that stems from where we came from, and the fact that we met at school. We’re still able to look at each other and remember what we were like when we were kids, so that keeps you in a bit of a personal bubble. When you go to some of these weird parties and are in situations where sycophants are around you, or are at some music industry thing, you’re still able to enjoy but not believe any of it.

“The very beginning of the band, when we were looking to get a record deal, was quite excessive – being put on first class flights to America, ferried around in limos. We don’t live that kind of life now even though we’re far more successful. Back then it was such a contrast – none of us had any money. But from that we developed the ability to distance ourselves from environments like the ones I’ve mentioned. We enjoy them for what they are and laugh at them, but we don’t let them become part of us.”

There is a strong sense that Bellamy hasn’t changed that much at all, or hasn’t really accepted the changes in his life. He agrees. “I’m quite sure I could put on a pair of overalls tomorrow and enjoy an honest day’s work. I enjoyed the painting and decorating job at the time, and it’s not too distant, to be honest.”

How does he feel, then, about the meaning and value of success? Does it become relative or meaningless after a point, after the first five million album sales or the first million in the bank account? Or is it something of a more personal feeling?

“You start investigating other creative avenues you might not have had the courage to pursue,” he replies. “Success allows you to challenge yourself, how not to repeat yourself. The good thing about Muse is that we’re quite open to that, and I think success for us in the future will depend on how able we are to adapt to trying out new things, new styles. As to what our limitations would be – well, that would be the next test.”