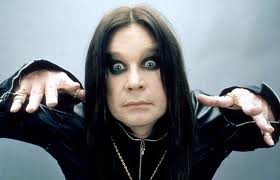 “What is this that stands before me? Figure in black which points at me?” This is a line from Black Sabbath, the signature tune of the immensely successful 1970s Mogadon-driven heavy metal band of the same name. The band’s former lead singer, Ozzy (John) Osbourne  – who sang these very lines before continuing with “oh, no, no, please God help me” – is standing before me, a figure in black which is pointing at me. I am, surreal as it may sound, quite literally at home with the Osbournes.

This is the interview that almost never happened: Ozzy’s tired, Ozzy’s not in the mood, Ozzy’s not feeling well, Ozzy’s blah, blah, blah. But after cancellations, postponements, delays, change of interview location and the not at all usual associated phone calls, we’re here in leafy England, being driven along narrow roads in an area called Jordons, houses on each side of the road bigger than hamlets. “It’s the Beverly Hills of Buckinghamshire, you know,” the driver tells me, pointing out actor David Jason’s grounds here, former Sweeney cop character Dennis Waterman’s crash pad there.

As we approach the Osbourne residence, two sets of big black gates initially blocking our way down the snaking drive, the first member of the Osbourne household comes into view. Sonny Osbourne is hairy, salivating at the mouth, his tongue lolling out, sniffing around the strangers, eyeing us warily – an Alsatian dog who treats my sphincter-tightening presence (alas, I am not at peace with dogs) with the contempt he reckons it deserves. The Osbourne house? It’s absolutely magnificent. Set on more than several acres, it’s a big pile tastefully stuffed to the gills with objet d’art, Persian rugs, silverware, family photos, walls of gold and platinum discs and antiques.

Speaking of which, here’s Ozzy. My God, he looks awful, like a Spinal Tap caricature come to life: long, straight hair dyed purple at the ends, shades perched precariously at the bridge of his nose, his hands shaking (O-Z-Z-Y amateurishly tattooed on the knuckles of his left one), his speech slurring, the gulper of so many pills (anti-depressant, anti-seizure, sleeping tablets, “all kinds of different psychiatric medication” he tells me) you can almost hear him rattle as he walks. Left with a chemical imbalance following his many years of drug and alcohol abuse, Ozzy shuffles around like a poorly Granddad in carpet slippers, a breathing advertisement if ever there was one for the system-sucking effects of continued hard drug use. His wife Sharon mopes around, dinky drink in hand, casually indifferent, it would appear, to the goings-on. What larks, Pip, what larks. 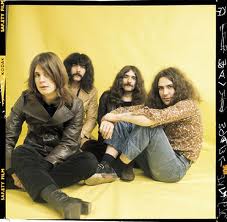 Ozzy’s game for a laugh and swears like a battalion of soldiers. Leading me into one of the pile’s many rooms, he starts off by saying he’s led a charmed, blessed life, one full of luck mixed with a certain amount of talent. Following the Black Sabbath glory decade of the 1970s, subsequent years spent forging out a solo career were consistently scuppered by his lapses into hard drug use. When Black Sabbath fired him at the end of the 70s (musical differences, I don’t think) he ended up in Los Angeles’ Park Hotel, refusing to come out of his room for three months. His visitors (which, after the first week, did not include room service) were his drug dealer, who dropped off cocaine several times a week, and off-licence and pizza delivery people. Then, one day towards the close of his stay there, a woman called Sharon Arden buzzed the doorbell. The daughter of legendary 1960s manager Don Arden (best known for dangling people out of hotel room windows), she managed and then married Ozzy. She is, without any shadow of a doubt, the reason why Ozzy is still alive and why he continues to be a successful rock act. He’s given up the hard drugs, he tells me, and the smoking. Alcohol? No spirits (gin, vodka, whiskey), but he enjoys the occasional glass of wine and the odd bottle of beer…

“As I got older,” says Ozzy, sipping from a pint glass of water throughout, “I began to wake up with monumental fuckin’ hangovers. Believe me, if I felt great in the mornings, I’d still be doing it. If it was working for me, I’d go, fuck this, I’m gonna get me a bag of powder. But I couldn’t stand the desperate feeling the next day. I didn’t get out of it scott-free…”

It all changed in the mid-90s when Sharon tried to get her husband onto Perry Farrell’s achingly hip Lollapalooza tour. “They said that me and my music was irrelevant. So Sharon told them to piss off. She said, fuck ‘em, I’m going to do my own festival – Ozzfest. I said to her not to do anything rash like booking me in for a string of dates, so she just advertised a few – but they sold out in a heartbeat. Then it grew and grew. Before we knew where we were, we’re doing 50 shows worldwide – Moscow, all over Europe, America. As if that wasn’t enough, we’ve got a major hit television show in the States, which is fuckin’ mind blowing.”

Between Ozzfest and MTV’s The Osbournes (a reality-style, fly-on-the-wall satellite television show filmed at the family’s Beverly Hills residence over a five-month period), Ozzy is enjoying the most successful period of his life. The little working class kid from 14 Lodge Road, Aston, Birmingham, who describes his early Brummie persona as “a raggedy arsed, unclean peasant” and his later one as “a very simple man that doesn’t take much to confuse”, has become the most unusual rock/television star of the era. And one of the richest – the MTV show is the most successful in its 20 year history. “I just plod along…” mumbles Ozzy, when asked how he does it. Perhaps Sharon, one of the show’s producers, provides the necessary impetus.

“One thing I don’t do is blow my own trumpet,” he continues. “I quit smoking a year ago, because I was doing bad shows – I’m getting older and my tolerance is dropping, But the smoking was effecting my performance, so I threw it on the fire. If I’m on stage, I don’t want to be a weirded-up old guy that’s trying to be a teenager, singing like a fuckin’ idiot. When I’m onstage and I look into the audience, I wonder how many people work in a garage; deliver shit they don’t want to deliver. They’ve all got jobs, or most of them have, and probably working in one they don’t like. They save up their spare money and come to my shows to see me perform. And if I go on stage and appear not to give a fuck… I’ve always taken the approach that I would pay to see them; I’ll never become such a dickhead that I’ll say people are privileged to be in my company, because that’s wrong. All you see in this house is what my fans have provided me with. Living a straight life is not for me. I need something to take my mind out of itself. Rock’n’roll has brought me a lot of happiness. People say now that I’m becoming a television icon, but primarily I’m still Ozzy the rocker.”

In a strange Elvis-meets-Nixon parallel, Ozzy the rocker was invited to the White House in the early 2000s, where George W. Bush honoured him. Shortly after, he performed in front of the Queen of England (one wonders what she’ll make of early Black Sabbath classics such as War Pigs and Fairies Wear Boots?). “I’m finding, as I get older,” says Ozzy, clearly tiring of talking, “that I can’t leap and bound around as much as I used to. It takes its toll on you, but the fans want to hear the songs. How much longer can it last? When the tickets stop selling, that’s when we’ll know.”

What does he see himself doing in five years? “What do I look like – a fuckin’ clairvoyant?” he answers back with the only genuinely amusing Cheeky Charlie moment of the afternoon. “Somebody asked me in 1970 as to where I’d be in ten years time I said the same thing to them. I don’t know. I don’t think I’ll be on stage for another 35 years, that’s for sure.”

So Ozzy – what with all the drugs, the booze, the shooting of 17 cats during your first marriage, the onstage biting-off-the-head-of-a-bat incident, the hanging-the-dwarf act in your early 80s live shows, the threatened murder attempt on wife Sharon in 1989 (“I mixed psychiatric medication with alcohol and blacked out,” is his reasonable enough explanation) – do you think are you lucky to be alive? “Lucky to be alive? Blimey, mate, that’s an understatement, that is.”

(This first appeared in The Irish Times/Ticket, August 2002.)