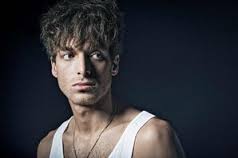 Oh, by jingo it’s a long way from working the Saturday night shift in his parents’ chip shop. Back when Paolo Nutini was a teenager in his hometown of Paisley, just outside Glasgow, he’d make a few bob serving up singles, doubles and a side order of crisp onion rings in Caselvecchi Café.

And now? Well, now he’s sitting in a swanky Dublin hotel boardroom. He looks tired, does Paolo. Or, to be more precise, he seems to have mastered the art of looking tired while still obviously full of vitality. In short, Nutini looks like the kind of attractively disheveled singer-songwriter guy your girlfriend’s gaze (or, for that matter, your boyfriend) would wander over to more than you’d like. Even though we’re indoors, Nutini’s hair is unkempt and windswept; even though it’s blowing a gale outside, he’s wearing a simple, unbranded t-shirt; even though it’s a sky full of grey, he has a tan that would shame a Spaniard. We should loathe this fine specimen of a man, but darn it, Nutini comes across as a really nice bloke.

It has been, believe it or not, over ten years since he inveigled his way into the music industry. Initially, Nutini was a roadie and t-shirt seller; he later worked as a recording studio gopher in Glasgow’s Park Lane Studios. And then, in 2003, he popped up on stage at an open-air gig in Glasgow. It was here that the 16-year-old was clocked by his soon-to-be manager, who promptly dragged Nutini down to London, where he embarked on an apprenticeship of sorts in pubs, cafés, and other assorted venues. Within three years, he was selling out gigs across the UK. The rest of the story is – well, you get the picture: million selling albums, major success, various worlds unashamedly prostrating themselves at his feet.

And yet he seems untouched by it, which leads us to believe that music – as well as his involvement with it – still gives him what it gave him over ten years ago. Nutini finger-combs his hair, rubs his three-day stubble, and speaks in a virtually impenetrable, thickly layered accent that can only be Scottish.

“Music has always seemed like a challenge,” he begins. “You know, fun, but a challenge nonetheless. You have just a mish-mash of noise and words and ideas in your head that eventually gets pared down to something coherent, and when you hear the end result being hurled back at you from a live audience – well, that’s a trip I know I’ll never get tired of. And the feeling of connection during the gigs – the chemistry between you and audience, the energy flying to and fro, the reaction – is just amazing. There’s a lot of mutual adoration flying around, too; nerves, tension, anxiety, and all kinds of emotions. Hopefully, all of that will turn into adrenalin, all the way through to ecstasy and relief. To think that all of the aforementioned is part and parcel of my job – and to make sure it’s all conducted in a structure that has a degree of spontaneity – is brilliant. For me, the trick to winning is to make sure as best I can that there are the same amount of people – if not more – at the end of a gig as there were at the beginning.”

Nutini’s albums – 2006’s These Streets, 2009’s Sunny Side Up, and 2014’s Caustic Love – sell in their millions, but to the casual observer he remains something of a love/hate experience. On stage, however, it seems that even his detractors agree he can cut the proverbial mustard. There’s a primal looseness about his performances – a beery blend of natural swagger and pronounced sweat. Does he drink before a show, we wonder? Nutini nods his head. “I might have a glass of wine at dinner before a gig, but I’ve never gone on stage drunk.” Never, ever? “No, really, honest. My responsibility to my fans doesn’t just stop at the ticket they’ve bought to see me, you know.” We detect a hint of annoyance underneath the accent. It quickly passes.

“I use my family and friends as an example of this – if they buy a ticket for a gig that doesn’t take place for months, they stick the date in their diary, pin the tickets on a noticeboard, and then when the day comes they dress up, book a meal, grab a taxi. Add all of that to the sense of expectation, and you’ve got a powerful responsibility not to disappoint people. So if you, as an artist, or singer or whatever, go on stage under the influence, then in my opinion it’s not on. You want to be inebriated by the music, however; and you want your inhibitions to drift in a way they might after a few drinks. You want to be elevated, and I genuinely think you want to be high, in the most sensible and responsible fashion. You want to be euphoric, I suppose, where the music coming from the stage takes you to a place where certain levels of intensity and joy resides. That’s what you want, isn’t it?”

That’s what happens to him during a gig, he relates. He closes his eyes and enters into a frame of mind that, he enthuses with a beatific smile, he still finds exciting, intense, vibrant. “It still scares the crap out of me, but it still gives me the kind of buzz that’s legal. I certainly don’t go onstage and go through the motions – or the emotions – and walk off with money in the bank. I find the more that my ability catches up with my ambition the more of a buzz I seem to get from it.”

Caustic Love is something of a step-up from his previous album releases, which always seemed to walk a dangerously thin line between bridging the twin reference points of UK singer-songwriter John Martyn and (alarmingly, to these ears) Irish singer-songwriter Christy Hennessy. Nutini seems acutely aware of the change in direction, but is, perhaps, more taken with the song content itself than the subtle changes in arrangements.

“You might ask why the album is called Caustic Love?,” he posits, although this topic seems to be more on his mind than my own. “In love, you can be scared, beaten, lost; you don’t want to make mistakes, do you? I often think of what it must be like for, say, nuns – they effectively lock themselves away and marry what to all and intents and purposes is a mystery. They marry a mystery! It’s as much an obsession as falling in love with something concrete and staying in love with them until you die. Falling in love doesn’t seem the most sensible or responsible idea, does it? But you do it, and you don’t reflect on it. Love eats away at the defence mechanisms, the things that hold in your vulnerabilities. But at least you’re feeling something.”

We appear to have touched a nerve, albeit only for a second or three. Writing honest songs, expressing emotions – that’s mostly your thing, isn’t it, Mr Singles, Doubles and a Side Order of Crisp Onion Rings? Another ragamuffin grin appears, and for what seems like the nth time he drags his fingers through his head of unruly hair. Not every song is written like that, he says. “With some songs you just stumble across a good vibe and want to make people dance, make them smile. You don’t always want to make them cry.”