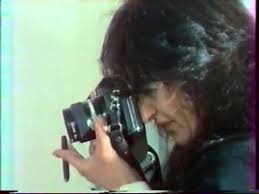 Pennie Smith on her photo of The Clash, which has been voted the Best Rock’n’Roll Photograph Of All Time:

“I’m so familiar with it that I can’t assess it. I’m astonished that it’s taken off so well. For me, taking it, it was feeling that something was about to happen. I saw Paul Simonon lift his guitar from his shoulder, wondered what he was going to do with it, knew he was coming my way, and I just took the shot. It wasn’t a constructive photo, rather like tiger hunting in the old days – will I get the tiger or will the tiger get me? It’s only recently that I’ve come to realise perhaps the reason it’s loved so much is that it’s a bloke’s thing. It also works because it was so unusual for Paul to do something like that – he’s so gentle, so straightforwardly ethical, Mr Cool losing his temper. Paul refers to the photo as our bastard child, because it keeps reappearing and demanding attention. It’s symbolic of anything, really, and very little to do with music, I think, but rather something else altogether. If it had been in focus, the image would have died.” 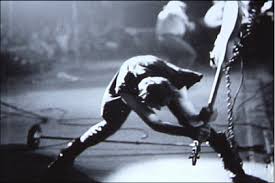 She doesn’t use colour. She hates using flash. She doesn’t pose anyone. “If I’m talking to people and bang a flash off in their face they’d look shocked. Also, being front of stage taking flashes is like letting off machine gun fire – it destroys the atmosphere.”

Photographer Pennie Smith is talking to The Irish Times minutes before her debut Southern Irish exhibition, and she’s having none of that old nonsense about her being one of the best rock music photographers of all time. “I’ve been found again somehow,” she remarks on her current mainstream status – a status that rock music fans have been aware of for many years. “Maybe it’s the liking for guitar music over the past year or so. I also think photography has become a sellable art medium. Ultimately, I’m a jobbing photographer that has carved my own niche. I’ve been very lucky…”

In her 50s, Smith has been taking photographs of rock bands, singers and musicians for over 30 years. She started working for New Musical Express in that paper’s hip gunslinger phase, an almost mythological period of time when writers such as Nick Kent and Charles Shaar Murray travelled around the world interviewing the likes of The Rolling Stones, Led Zeppelin and other rock’n’roll icons of the day. She’s still as busy as ever with a work ethic that comes across as equal parts abstract and ambitious. Work that she describes as “swotting up” (her archive of negatives for her as yet undeveloped website) remains a low priority. “I’d rather work on something interesting…” Smith is horrified to admit that she has been ‘shooting’ since the early 1970s, claiming correctly that the people she has been working with over the past few years (notably The Strokes) weren’t even born then. Always in the back of her mind, she says, was a sense of not doing work for posterity, hence her bemusement at seeing her photos hanging up in a gallery.

And what work it is. The 40 or so images at the gallery represent a drop in the ocean of Smith’s output, but it nevertheless encapsulates what she finds interesting about rock musicians: ugly or beautiful, they express a mixture of ego, otherness and a commitment to the cause of style and revolt. It doesn’t matter whether or not she likes them. What’s important is a level of empathy.

“It’s not like I need to be chums with them, or they with me,” she admits. “But I have to appreciate that on the road it’s their own space, and if you didn’t like someone whilst travelling on a bus for a few weeks that’d be a nightmare. It’s really about feeling comfortable with people. All the bands I regularly work with are people I wouldn’t necessarily speak to after the job. They let me get on with the job and I let them get on with their job. On the road, it’s the same – we read, we watch a movie and I don’t get in their face until I have a camera in my hands. Usually, by the second day with a band I’m invisible to them, which says very little for my charisma. After a while, they seem to think that I’m not enemy aircraft – what I do is what I do.”

And what Smith does is take great monochrome photos, compositionally quirky, very much of the moment, visually arresting and quite likely possessing the distilled essence of rock star. She’s photographed pretty much every well known rock star and band you can think of (she shot most of NME’s covers from 1972-1982) and several you thought you’d forgotten (Mansun and, bizarrely, Dublin’s Aslan). She makes a veiled reference to U2, who she once photographed (or, in her own words, took “pot shots at”) but which for whatever reason “didn’t work out for my benefit or perhaps theirs.”

What makes her work enjoyable, she says, is the people she works with and the actual art of it. Ironically, it isn’t the music: “I’m tone deaf! It’s shocking, isn’t it? I get invited to all the studios and the album launches. I’m asked what I think and I haven’t got a clue. I’m the kind of photographer who isn’t waiting for someone to tune up their guitar. I can see the visual build up of what might happen next, which has probably got nothing to do with the noise coming from the stage. Sometimes I’m asked what I thought the gig was like, and I can quite genuinely say I didn’t hear it. If you’re looking through a camera you aren’t aware of what’s going on. You’re watching and hoping that the light changes at the right point for you to snap a good one. Of course, I can’t be on the road with a band if I didn’t like their music in an overall sense, at very least, but it’s more to do with the people I’m with. Like any job, I suppose…”

Is there anyone she has photographed and hasn’t liked? Blondie’s Debbie Harry was having a bad hair day when Smith arrived for a photo shoot many years ago: “she just didn’t want to know. I shot her and left, but that photo worked out.” Politicians don’t exactly inspire her: “I found them weird to photograph. The lot that I did (for NME in the early 1980s) were on their best posing positions. I couldn’t get my teeth into them at all. It was really sterile – here comes the photographer, let’s just sit here and be terminally boring.” Prize fighting photography dragged her away from rock’n’roll for a while, but she left it behind when she realised she couldn’t see as many dimensions with the sport as she could with music.

“I like the bunker mentality of a rock band on the road. I travel with my camera, not too much equipment and one bag, just doing my job. I like the kamikaze sense of whether the photos come out or not. As soon as photography gets into poncy studios, lighting directors and make-up artists I’m out the window. That’s what I like the rock business for, because it’s not quite civilised society.”

Latterly discovering that she’s backing herself into a career corner through a sense of self-indulgence, she generally takes on projects and work only on her terms. “I probably get paid enough money now to be a bit snotty about who I do and don’t work with,” she says. “I’d got wind of The Strokes early on and I found them so interesting. Once I saw them, I knew there was no other place on the planet I’d rather be than right in their room taking their photographs. There was an instant mutual liking. The Strokes excepting, I don’t translate well to America. They think I’m far too grubby – I’ve not got the right nail varnish; I don’t even clean my nails.”

We both look at her nails and realise that, yes, America will never take her to its collective heart. She stops short, says she’s spoken far too much, that the exhibition is due to start very shortly and that she’s gagging for a smoke. She returns, sated, mere seconds away from the opening. Her timing, as usual, is perfect. Pennie Smith chooses to disagree, however.

“As a photographer,” she concludes, “you’re hopefully there a nanosecond before the right moment. If you’re there at exactly the right moment then you’ve missed the shot, haven’t you?”