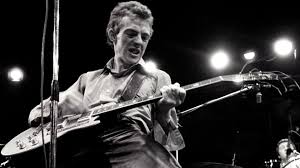 Never say never? Who would ever have thought that The Irish Times and Philip Chevron would be discussing the reformation of The Radiators From Space, the first Irish punk band and one that in 1979’s Ghostown released possibly the most ambitious and shamefully overlooked album of Irish rock. Yet here we are, sitting al fresco in Dublin’s Parliament Street, to an interruptive backdrop of a blaring Wild Rover and several main drag citizens. Synchronicity, muses Chevron – it’s a terrible thing, altogether.

It wouldn’t be the first time, however, that such synchronicity has impinged on Chevron’s life. Briefly, his career has been stitched up by interweaving threads of history, art, emigration, symmetry and occasional personal discomfort – it would seem there is neither one without the other. Indeed, Chevron – for all his eloquent, tangential thought processes and shiny rock star clothes – comes across as the type of person who would shrivel up and wither without at least three of these emblematic tokens.

But really – isn’t almost twenty-five years a ridiculously long time to wait to reform a punk band that wasn’t even overly feted in their own land? A band that left Ireland in the wake of general indifference and elitist plaudits? The vague answer to this question is more than likely. The clear-cut answer is somewhat more, well, direct. “The simple answer is that for the first time right here and now seemed the right time to do it,” says Chevron, a slight, slim man still embroiled in many aspects of the arts, but currently focusing on rehearsing with the reformed Radiators (which includes original members Pete Holidai and Steve Averill, and new member and former Pogues bassist Cait O’Riordan). “Periodically, people asked us about getting back, but the co-ordinates never seemed to be in the right place at the right time. There had been other reasons to do it, also, but none of them felt good enough. And one of the main reasons why it felt good enough to do it now is that Cait O’Riordan became available.”

History has a funny way of playing tricks: intermingled with Chevron’s smash and grab and nurturing approach to art is a cast of avuncular characters within Irish rock: Fachtna O’Kelly (in the mid-70s a music journalist who gravitated towards artist management and who sowed the seeds for the formation of The Radiators), Jackie Hayden (former CBS Records man in Ireland who produced The Radiators early work), Eamon Carr (formerly of Horslips, whose trad/rock concept albums helped shape Ghostown, and who was instrumental in getting The Radiators signed to London-based Chiswick Records). Added to this mix were Thin Lizzy’s Phil Lynott (who gave the band a leg-up UK tour support slot) and James Joyce (whose disaffected spirit imbued Ghostown from start to finish). The band left Ireland for London in the autumn of 1977 and – although they had thought they might – never returned.

Yet there, lying in the ruins of Camden Town, were second-generation Irish artisans such as Shane MacGowan and Cait O’Riordan. As the reputation of Ghostown increased amidst an admittedly select crowd of people, so the seeds of The Pogues grew. Within a few years, Chevron was playing alongside O’Riordan (who subsequently left the band to marry Elvis Costello). Now, O’Riordan brings her own history into The Radiators; the puzzle is the same but with pieces put back in a different order.

As Chevron states, O’Riordan making herself available gave the band a new sense of purpose, a crucially important factor in the hoary continuing-from-where-we-left-off scenario. The artistic point of The Pogues reforming some years back, points out Chevron, was that they had – just about – survived to tell the tale. “It was hugely resonant to see Shane MacGowan singing The Old Main Drag at the then age of 47 – against all the odds. For me, a lot of The Pogues repertoire was about that, and therefore there was little point in adding to it. It was simply a celebration of the fact that we were still around, albeit with a little less hair and slightly larger paunches.”

The Radiators getting back is a different thing, Chevron contends. He admits the band had rarely connected directly with people’s experiences, but the justification for the core members getting back together again was to see if they could add to the narrative, the story. “And a lot of time had to elapse for that to happen. Given that we’re a band who always existed to respond to what it was like to be Irish, there was a long period where there wasn’t anything to say about that, frankly.”

But things have changed by which judicious comments must be made and certain social and political advances have to be made sense of. Chevron views Ireland as a concerned, probably agitated outsider, and says the development of Ireland over the past two decades has been “ghastly to watch”. He splutters and curses at the very thought that many people would think such progress is “great, and sure isn’t everything grand?” Yet he’s savvy enough to realise that The Radiators is no spurious cavalry charge advancing over Howth hill in order to tell the people of Ireland what ails them. “We never had illusions that we could make a difference – although there may have been once or twice where we helped changed perceptions, but only in the right people.”

The questions of freshly minted material and who exactly their audience is these days are of equal importance. Chevron, in his almost forensic manner, is resolving each as he goes along. “With regard to new material, we first of all had to stand up the old material and see how it fared, musically. The Radiators had an ambitious musical palate in the sense that we wanted to see how far we could go, and now we’re stripping it back down again. It’s because we’ve been there, and there wasn’t much point in adding string sections or heavenly choirs. Over the years one of the things that happen to you as a musician is you learn when simplicity is best; you learn when less is more, which is something a nineteen-year-old doesn’t necessarily know. So the music is quite primitive now, and I quite like it. We haven’t got anywhere yet with new material, but we’re throwing a few ideas into the pot and seeing what happens. We don’t have a grand plan.”

And their audience? Chevron doesn’t have the faintest idea, and this is where the reunion might become unstuck. While he rightly says that the music – like Ghostown before it – will find its own admirers, the truth of the matter is that The Radiators audience of the ’70s and ’80s was a narrow constituency comprising people with an innate facility for moving on to pastures new – not necessarily a trend-oriented crowd, but certainly a gathering that would question the creative validity of any given art form. Without a hint of derision, Chevron calls it the “arty crowd”, the same that Sex Pistols and The Clash attracted in London and The Ramones, Blondie and Talking Heads in New York.

“I hope there will be enough of an audience to make the reunion worthwhile, and I hope we don’t embarrass ourselves, either. It’s a risk you take, and it’s something I’m acutely aware of because The Pogues have very much a constituency. But The Radiators never were hip, so it’s not possible for us to be retrospectively cool. There’s always a chance that no one will want to see us, but that’s a challenge we’re willing to take.”

The creative risk-taker might just twig that something cool is going on, however. “Why not say you might like this, why don’t you want to know about us? It’s a little bit more than just a cerebral experience, you know. You should go and see The Radiators not because your Irish rock history book tells you that you must. Don’t come and see us for that reason – rather, come and see us because we might just be a decent rock’n’roll band.”

Which ultimately – and to their credit, it has to be said – is what the present-day Radiators are attempting. They’re not saying they’re anything special, insists Chevron, and they’re most certainly not allowing history or expectations to cast a spectral shadow. “That’s just baggage and you can’t afford to take it with you,” remarks Chevron, smiling as the tinny sound of Wild Rover hovers from a passing truck. “You still have to make sense of a song in the moment, and if anything qualifies us more to do this now in a way we weren’t qualified to do it first time around it’s that we have the humility to know that it all happens on the night or it doesn’t.”

Which leads to the question this writer has wanted to ask Chevron for over twenty years: what were you thinking of creating something as ambitious as Ghostown? “There’s a part of you that cherishes you were that person,” he answers, “even though life might have knocked the stuffing out of you since. I’m always glad that I knew as little about life as I did when I wrote Ghostown, because otherwise it would have been tempered by too many other elements, by too many empirical concerns.”

Chevron’s shiny suit glints in the sunlight. A hint of the teenager in the man remains. “You have to make records like that, when nobody dares stop you.”

(This interview was published in The Irish Times, summer, 2004.)