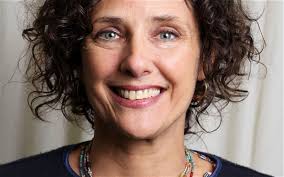 Rebecca Miller knows that people will want to ask her questions about her father (the Pulitzer Prize-winning American playwright Arthur Miller) and her husband (triple Oscar-winning, British-Irish citizen, Daniel Day-Lewis), but that doesn’t mean to say she’s going to listen to, let alone answer, them. We met several months ago in Dublin, when she was attending the Audi Dublin International Film Festival, for the Irish premiere of her new film, Maggie’s Plan, and we weren’t too surprised by a request not to ask any questions relating to her father and husband.

In truth, this is fair enough – Miller is, after all, an acclaimed writer and film maker in her own right, and besides, she must be weary of fielding queries about the two very famous men in her life. Such proximity has made her even more adamant to forge her own niche, and she has achieved precisely that with a parallel sequence of acclaimed books and films (one of which, 2005’s The Ballad of Jack and Rose, featured her husband – who, as we shall see, must not be named).

Miller takes her seat in the chintzy hotel room; she looks typically smart bohemian, oozing mature hipster sensibilities that naturally arise from decades of hanging out with the New York art-scene intelligentsia. She is pleasant with it, though – brainy and bright, with no hints of pretentiousness. The same can be said of Maggie’s Plan, a NYC-based screwball comedy that deftly blends classics such as Bringing Up Baby with inventive Woody Allen and crafty Noah Baumbach. The premise concerns hyper-rational 30-something Maggie (played by Greta Gerwig, currently Noah Baumbach’s partner), who wants a baby without male involvement. We won’t spoil the overall effect of what is an exceptionally insightful film, except to reveal that it touches on topics that Miller regards as “complicated.”

These topics include ‘big issue’ questions such as the meaning of marriage, motherhood, relationships, and biological clocks grinding to a halt. Hasn’t Miller said before that she never had a great desire to be a mother, and that if it hadn’t been for her marriage to Day-Lewis she probably wouldn’t have had children? She arches an elegant eyebrow at such a tangential question, but she responds gamely – without naming names. “Well, I’d like to amend that by saying if I hadn’t met the individual I married then I don’t think I would have had the kind of determination and wherewithal to have had children as a single woman. Also, it isn’t really true that I never wanted to be a mother, because I was always quite maternal, but it takes so much drive to do what someone like Maggie does – she has almost a vocation to be a single mother.”

Is marriage an age thing? Do people in their 20s and 30s have a more fluid notion of what constitutes a lasting relationship? “In my experience,” says Miller, who has been married to Day-Lewis for almost 20 years, and with whom she has two sons, 18-year-old Ronan and 14-year-old Cashel, “it doesn’t necessarily cut along the age line. I have friends my age who are in very fluid relationships, who are not traditionally bound, and are very happy about it. I also know people who are younger and moving into more traditional, promissory relationships. Personally, I think it’s an individual thing.”

Miller’s childhood in Roxbury, Connecticut, was defined to a large extent by being surrounded by a community of artists – sculptors, choreographers, writers. Her mother was Inge Morath, once an assistant to Henri Cartier-Bresson, and subsequently a Magnum photographer who worked on film sets (including, in 1960, The Misfits, which is where she met that film’s screenwriter, Arthur Miller).

After graduating from Yale University in the mid-‘80s, Miller worked as a painter and sculptor, and then veered into making early art installation films that she co-exhibited with her work. By the late ‘80s, she drifted into acting. “I didn’t know how to get on to movie sets, so I started acting partly because I knew I wanted to be a director, and partly because I needed money. Eventually, I got a job that helped me to pay for some small films I was making. In a way, acting didn’t necessarily lead to directing, but it did teach me things about directing that I don’t know how I would have learned otherwise.” It’s one thing to take acting classes, she says, but by being directed by the likes of Alan Pakula, Mike Nichols and Paul Mazursky, “it was as if I was able to use myself, my mind, my body, as a kind of learning ground, an experiment. I also learned about my own limitations, and I realised that acting wasn’t my primary talent.”

What did she feel her limitations were as an actor? “I would have trouble not seeing certain things in the way a writer or a director does. There are few people who can do that.” She mentions Gerwig and her Maggie’s Plan co-stars Bill Hader, Maya Rudolph and Ethan Hawke. “They are all writer/directors. Greta thinks very much from the point of view of the character, and that makes her a truly wonderful actress. I just couldn’t do that.”

Why not? “I don’t know,” she replies, more genuinely puzzled than exasperated, as if she has thought about this often. “Acting is a rare talent; it’s a particular way of using your imagination to project a world, to place a bubble around yourself. Some people have that more than others. I have more of a knack for understanding what other people are feeling. One of my gifts as a director, if I can say this, is to be able to understand how to work with individual actors. Each actor has his or her own best point of entry, and if you try to gain entrance via the wrong door it’s not good. Actors have to figure out how to enter.”

Miller doesn’t need it to be said, of course, but if she had continued acting, she would most certainly have been compared (unfairly) to her husband. It’s even more comical that she still doesn’t name any names. “Oh, probably. And that’s the other thing – being married to him and knowing what he does and how he approaches it, I wouldn’t really have wanted to. It would have been pointless… I understand what great acting is.”

Driven by curiosity about people, about character, about personal interactions, Miller defines herself in creative terms as a pure storyteller. “It really is as simple as that,” she affirms. “I’ll use whatever means necessary to tell a story. Some stories are more appropriate in a book; some are more appropriate in a film, and some in a short story. I’ve learned how to work in those media so I can tell my story in the best way possible. I’m just curious about people. The truth is, you learn a lot about human beings – how they develop, and so on – by having children.”

Still selling her movie, Miller slips in another reference to Maggie’s Plan. “You also empathise with mothers. Until you have children, you’re on one side of the riverbank and everyone else without children is on the other side. You wave at each other, but you don’t really understand what they’re going through. Once you have children you understand. Having them has had a huge influence on my work.”

In 2001, Miller and Day-Lewis moved to New York from Ireland (they had lived in Annamoe, County Wicklow, from 1997), but the plan – Rebecca and Daniel’s, not Maggie’s – is to return sporadically to make films. She says that, for the most part, they take it in turn to consider, conceive, accept, research and finalise their respective film work. “I’ve been coming back and forth to Ireland for over 20 years,” says Miller. “I feel increasingly in love with it, and I’m hoping to make films here. My kids feel they’re partly from here, and as a family we’re very connected.”

(This was first published in The Sunday Times’ Culture Magazine, June 26, 2016.)