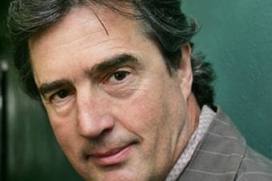 “I live quite an isolated life in some ways, and it can be interesting to come out and talk to people. I don’t read reviews until some months after the books are out and have been reviewed. You have to take them as they come, don’t you? Publishing books is a form of boxing but you can’t actually get out of the ring, and you take what you receive as best you can. There is a large grace, if you can learn the discipline, of not being too effected either way. Now, I haven’t achieved this discipline, but I can see that it would be a mighty thing to acquire.”

The Merrion Hotel, Dublin, a summer’s day, and the writer’s life as explained by Sebastian Barry, the Dublin-born, Wicklow-based award winning novelist and playwright, is one of reflection, reclusiveness, emergence and wariness. He may be domestically conjoined by his wife, Ally (a former actress turned writer) and his three children, but you can imagine this most stylistically delicate of writers, whose signature themes revolve around the family, gingerly typing a full stop at the last sentence of the final page of his latest work and – unlike some writers who celebrate typing ‘The End’ by lighting up a cheroot and popping a cork – peering out the door of his house to see if a pesky critic is wandering by. Not that, as he says, he’s affected by what people say about his work; rather, he feels he has no control over what is said. And so, when the book is done and dusted, he does the right, obvious thing: he moves on. 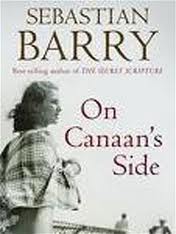 Yet something else happens in the process of getting his thoughts, his stories, his graceful prose, onto the page. With a recent book, On Canaan’s Side, out this month, Barry sits on the hotel lounge sofa, sipping on some exotic, flowery infusion that bears no relation at all to his surname. Exhibiting the clear hallmarks of his signature lyrical style, the book focuses on Irish grandmother Lilly Bere, who, through a layered, elegant narrative – which is equal parts intimate and expansive – slowly, compellingly, unfurls her life story.

“The main part of the book,” continues Barry on the process, “might be written in five or six months, although the first two or three chapters might take a year or so, as it takes a while to find the music. You’re listening out for the music, the whistle tune of the book, and the genuine thing that has nothing to do with you but the character.” The next step is to send the book away. “To your excellent agent, your amazing editors, which I have; part of the duty of a writer is to say enough prayers, agnostic as they might be, to find great editors and great agents. That’s so important.”

He will then respond to their notes, and when that’s complete, experience a hiatus for a few months, knowing full well that although the book bears his name he will have little or no access to it.
“That’s a little bit on the pathetic side because I can be awake for nights thinking about a sentence. I would like to change some aspects to it, but I’m no longer allowed. It’s like being homeless and having a bed for the night, but not during the day, and you’re wandering through Dublin until night time.”

Now in his 50s (and wearing it well, it has to be said), Barry has been writing since the late 1970s; he published his first novel, Mackers Garden, in 1982. In his younger days he wrote poetry, also, but by the late ‘80s he shifted creative gear into playwriting. Works such as Boss Grady’s Boys (1988) and The Steward of Christendom (1995) followed, with the latter, specifically, gathering such an amount of praise and awards (it took London’s West End and New York’s Broadway not so much by storm as by Gael Force wind) that for many it would have proved an impossible act to follow. Barry, however, continued with The Whereabouts of Eneas McNulty (1998, novel) and Our Lady of Sligo (1998, play).
A blip in his creative output, however, arrived in 2002, when his play Hinterland (a satire that focused on a political figure based loosely on former Irish Taoiseach Charlie Haughey) was savaged by the critics. Such was the reaction to it (the Sunday Times baldly described it as “feeble, puerile, trite, shallow, exploitative and gratuitously offensive”; The Telegraph, meanwhile, cruelly scuttled it with “as exciting as a lukewarm Spud-U-Like covered in rancid marge and greasy baked beans”) that Barry freely admitted to days hiding in the relative cocoon of his Wicklow home. One could hardly blame him.

With the benefit of hindsight, he now regards the reception to the play as a glaring example of how “some things happen that spook you, and then you spend some time licking the wounds.” What immediately followed was a period of, recalls Barry, sifting through what went wrong. “You have to sort that out in your head, because if you don’t the worst thing that could happen is you become defensive of that particular work and spend the rest of your life writing in order to explain it or defend it. Ultimately, things grow up and leave home, and – as with children – you have to let them wander out.”

If a writer can be said to snatch victory from the jaws of defeat, however, then Barry did just with his 2005 novel, A Long Long Way, which ended up on the shortlists for, among others, the Impac Award and the Man Booker. His 2008 follow-up novel, The Secret Scripture, was also shortlisted for, among others, the Man Booker (it, too, was pipped at the post – by Aravind Adiga’s The White Tiger) and won the Costa Book of the Year as well as the James Tait Black Memorial Prize.

“There’s a thing called a body of work that you don’t have when you’re 22,” says Barry, “and you don’t realise there might be some advantage in having something like that. At some level it’s a fearful undertaking. There is also a very important question of survival in writing. I started in 1977, and didn’t publish until 1982, so there was an apprenticeship there. Indeed, for the first ten years I’d say there was the luxury of an apprenticeship.”

Throughout the past 30 years or so, says Barry, he has had experiences good and bad, once or twice in extremes. He has noticed, he admits, that the only thing one can hold onto is being absolutely true to what one writes. “Just to learn where your ground is, yet at the same time to not be confined by it, because you can always extend the field up to the mountain if you work hard enough. It is quite local, my subject matter – a small subsistence farm rather than a great estate. And if you hold true to that then in some way it’s a form of protection for you as a writer.”

Not winning the Man Booker twice, though – is there an Oscar Wilde maxim lurking in the shadows, waiting to pounce? “Well,” comes the measured reply, “one is asked about that, and whether I’m concerned or upset at not winning isn’t really important. Honestly, to be actually shortlisted is an enormous excitement, so you should just try to enjoy it on the night – right up to the end of the dessert. The result? You deal with the result and then get on with it.”

Is it a disappointment, though, not winning the Man Booker even once? Not, he reveals for A Long, Long Way. When The Secret Scripture didn’t win, Barry says he felt disappointed for the people around him – his wife, his publisher, his agent. “For some reason, the book was made the favourite to win, and on the night it went down to a three-two vote, which is tight. I can honestly say it hasn’t left a scar, because I know that the miracle of being long listed was in itself something else. When I’m a few months at home in Wicklow, walking the dog and weeding the garden I have to remind myself that those things happened to me – they’re really quite Dick Wittington-esque events, aren’t they?”

And when he’s writing a book, does he ever think of what might lay ahead with respect to long lists, short lists, nominations, gongs and the glitzy palaver of prizes? Barry’s eyebrows arch, and a look of genuine surprise is thrown my way. “That way madness lies,” he remarks. And with that he sips a final sip of floral-hinted fluid from his cup, smiles, and walks out of the room as quietly as he walked in.