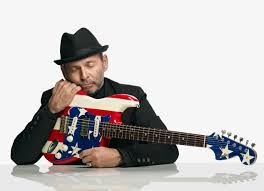 Personality crisis, left-wing radical politics, drug abuse, drug addiction, drug dealing, jailbird, rehabilitation, recovery, redemption – these are the ingredients of a life less ordinary but no less complicated, and if there’s one person still around to tell the tale then it’s Wayne Kramer.

Approaching his 67th year, Kramer is chatting from his Los Angeles office, preparing his work sheet. He may be all business-like, but Kramer’s demeanour is underpinned by relaxed, unbuttoned-tie sensibilities that make the conversation smoothly weave from his early days as a teenage malcontent in Detroit to his current preoccupations – these fuse his music (latterly of the free jazz variety) with his work for Jail Guitar Doors USA, which Kramer co-founded with Billy Bragg, and which provides musical equipment as a means of rehabilitation for prison inmates.

His life, he says, has been one of reaction. As a teenager in 1960s Detroit, he remembers feeling that the world around him was wrong. “The hypocrisy was unbearable,” Kramer remarks with a chuckle that is part resigned, part resentful. “Older people said one thing, the church said one thing, the politicians said one thing, and then they all did another. Children are taught to obey, and there’s a kind of mindlessness to it that I just couldn’t go along with. Also, it didn’t seem fair or right that our country was in a war with people 30,000 miles away in Vietnam when there was no threat to us. It just seemed wrong to me, and it as seemed wrong that people of colour were denied human rights, let alone civil rights in America; that poor people had to live the way they did.”

Kramer set upon all of these contradictions, and they provided him with incentives to try to change things. He was part of a generation, he recalls, that was in total agreement with each other that older people were screwing up everything. “I had a duty in that everything I had learned about how democracy functions tells me to not be quiet, to say something, to take ethical action. And that’s what I did.”

Cue the MC5. Proto-punk before the phrase was invented, the band formed in Lincoln Park, Detroit, in 1964, combining a volatile counter-cultural aesthetic far removed from the good vibes of the US West coast hippie movement. The band also had far left political connections: their non-traditional manager, John Sinclair, was active with the White Panther Party (a militant leftist organization of white people working to assist the Black Panthers) and was the first music editor of underground newspaper Fifth Estate (founded in 1965, it is regarded as the longest-running anti-authoritarian publication in North America).

From the mid-60s to the early 70s, MC5 blazed a trail coast to coast. As a support act, the band undercut headliners with belligerent energy; as headliners themselves they not only staged shows that were barely containable, they mentored other Detroit acts such as The Stooges. MC5 albums such as Kick out the Jams (1968) and Back in the USA (1970) laid down bruised blueprints for punk. Rock music, says Kramer, was a good way to spread the anti-authoritarian news. “Music has a role to play in our culture; it’s the messenger that tells what is going on in the next town, and I saw my role as being one of those messengers.”

While most of America at that time was listening to Beach Boys, Mamas and Papas, and Laurel Canyon singer-songwriters, MC5 chose not to take the soft-focus route. Was laidback LA beaten to the punch by Detroit’s working class agitation? “Detroit in the late 50s and through the 60s was a hard working, industrial centre, the manufacturing centre of the world,” reasons Kramer. “The pride of working hard is deeply ingrained in everyone that grew up in that environment; the unions were very powerful and helped the workers, and we worked hard and played hard.

“I found inspiration in certain kinds of music that had more visceral commitment and physical expression – like the free jazz creations of musicians like Cecil Taylor, Albert Ayler, John Coltrane, Sun Ra; the black gospel tradition, gut bucket blues. I also found it the music of The Who, Them, and the Rolling Stones. There was a rawness to it that spoke to me.”

From proto-punk to free jazz, from jail sentence to Jail Guitar Doors – in his mid-60s, Kramer is of the opinion that art and action is akin to fine wine: it improves with age. “It doesn’t always, of course,” he accedes, signing off to get down to real work, “but if you’re committed then your voice becomes sharper, your ideas become more focused, and you hear things better.

“When you’re young? Sometimes there’s just too much noise around you.”