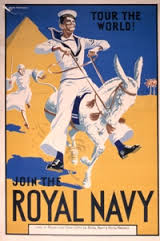 Did I ever tell you about the time I stayed up till dawn in the company of six transvestites in Singapore? Or the time I almost slipped overboard in a Force Nine storm while we were gamely sailing through the Bay of Biscay? What about, perhaps, the time I missed getting back to my ship in Hong Kong because I failed to hear orders above the din of music blaring away in a topless bar? Or, while on leave and back home in Drogheda, someone in a pub said to me that if certain friends of his knew I was in the British armed forces I’d get a bullet through my head? No, I don’t think I’ve ever mentioned these before. Perhaps it was all a dream? Or maybe they happened to a different person? Sometimes, other lives have a knack of making you feel like that.

Many years ago, I joined the Royal Navy. Seeing me off at Dun Laoghaire were my mother (who had, on receiving my news that I didn’t want to stay at school, and that I wanted instead to leave home, promptly walked into Dunnes Stores on Drogheda’s West Street and bought me a cherry red suitcase) and my brother (who had himself returned from two years in Australia). Looking back, I get a sense that I had absolutely no idea what I was getting myself into; I simply knew that I didn’t want to finish secondary school, and I didn’t want to stay in a dreary provincial town. The fact that my mother had left Drogheda in her early 20s for a life far more interesting in England could have been the impetus; my father wasn’t around (they had separated in the ‘60s), yet he too had travelled extensively in Africa prior to settling in London, where he and my mother married. That my brother had also left school early to live and work in Australia may well also have contributed to the family aesthetic of travel broadening the mind.

The only thing I am certain of now is that joining the Royal Navy changed my life utterly; I dread to think what I would have been like as a person if I had continued to live in Drogheda. Maybe I’d have passed the Leaving Cert and – then what? – went to college or got a job. The notion of this teenager back then was to spread my wings, not to have them clipped. Thankfully, my mother realised this, gave me her blessing, and signed the necessary papers. I remember that on the morning I was leaving, she helped me pack my red suitcase, and that when I opened it on the ferry over to Holyhead I found underneath a few vests a sex education book that she had slipped in when I wasn’t looking. Such foresight, such pragmatism, such love…

Of course, women were quite likely one of the more subliminal reasons for joining the Royal Navy – didn’t sailors have girlfriends in every port? It would be quite some time, however, before any female would find a six stone weakling with no discernible social graces in any way interesting. Besides, easygoing humiliation and lack of charm were core to the six weeks basic training I received at the ‘concrete ship’, HMS Raleigh, at Torpoint, close to Plymouth. Here, we were put through the hobnailed boot camp drill: raw recruits were subjected to what I vividly recall an unbending adherence to discipline, a hierarchical display of authority and a dismissive attitude towards any sign of sensitivity. If you sniveled you were sneered at; if you cried – well, you just didn’t cry.

It wasn’t juvenile detention – not any of us were remotely close to borstal boy troublemakers – but neither was it Hogwarts. Rather, it was the instilling of a militaristic belief system that traded facets of individuality for deference to authority. As well as learning basic procedural information about life Royal Navy-style, I was instructed how to polish shoes, march around a parade ground with a kit bag on my shoulders, shoot self-loading rifles, sew, iron, tie knots, peel vegetables, cope with varying intense levels of peer pressure, and how to avoid having my six-stone body being beaten up (clue: having a sense of humour really helped). I also learned, quite crucially, how to interact with, and strategically avoid, people in very compact spaces. Which was just as well because within several months (following further training at a specialist shore training base, HMS Collingwood, at Fareham, near Portsmouth) I joined the 230-plus crew of the frigate HMS Torquay.

At HMS Collingwood, I trained as a Control Electrical Mechanic, which meant that I (as part of a team) was responsible for the maintenance and repair of various types of communications, sonar and missile equipment. Within weeks of joining, the ship sailed for the Caribbean, and while I put up with what I’d experienced on shore with varying levels of forbearance, commitment and stubbornness, my experiences of being at sea on such a large vessel turned from wary to wondrous. A wet-behind-the-ears teenager from Drogheda sailing across the Atlantic on the way to the Virgin Islands? Pinch me until I wake up, Sub-Lieutenant! From a distance of over thirty years, it isn’t easy to pinpoint why I loved being at sea so much. The sense of genuine excitement at not knowing what the next day would bring?

Over the next five years (which included a two-year stay on HMS Rothesay, the highlight of which was a nine month around-the-world trip that saw us dock and join the dots pretty much everywhere between Gibraltar and Panama), I experienced things that to this day remain dramatic touchstones in my working and personal life. It is, for instance, both a blessing (hopefully, to those I work with) and a curse (to my wife, I’m quite certain) that I have an inbuilt sense of what constitutes a deadline. Perhaps it’s a basic fear of being ordered to run around a parade ground with a kit bag on my shoulders that has instilled such immutable time-efficiency in me? As for ironing shirts and trousers – well, if you want a crease you could cut cheddar with, call me.

You may well ask that if I loved it so much (and I did, I really, really did), why leave after five years? The truth is that I was getting tired of being told what to do – I was over the age of 20, and still being told to get my hair cut, polish my boots, be back on board by midnight. And then there was the claustrophobic, sweat-heavy proximity of people that, even now, I clearly recall with varying levels of fondness, dislike, amusement and unease. Enough!

And, besides, I was getting to love music more and more. Each week from when I joined up, my mother diligently posted two papers – the NME and The Drogheda Independent. In the former I read strange, interesting things about glam rock and punk rock, as well as first becoming aware of writers such as Raymond Chandler, Evelyn Waugh, JG Ballard, Albert Camus, F Scott Fitzgerald, Harlan Ellison, Hermann Hesse, Graham Greene and Franz Kafka, all of whose works I devoured. Through the Drogheda Indo, I made my sailor mates laugh by shouting out at totally inappropriate times townland names such as Termonfeckin, Annagassan and – their all-time favourite – Nobber.

I look back on those days of my life as undoubtedly – as the Defence Forces ads would have it – a life less ordinary, as well as a life that very few would, or could, fully understand. Curiously, I have no yearning to sail again – I have had the wind knocked out of me, you might say, by having done it before so brilliantly, and under such professional, disciplined care and control.

But, you know, there are times when I look out to sea and remember random, extraordinary things that I thought I’d long forgotten – a beautiful woman in Fiji, sailing through the Suez Canal, a dive bar in Hawaii, the human noise of Bombay, the calm of Antigua, the degrading poverty in Djibouti, and how a boy from the provinces transformed, quite literally, into a man of the world… Whenever these and other memories come back, I know my other life wasn’t a dream at all. And I thank God and my mother for that.

(This was first published in The Irish Times, summer, 2010.)